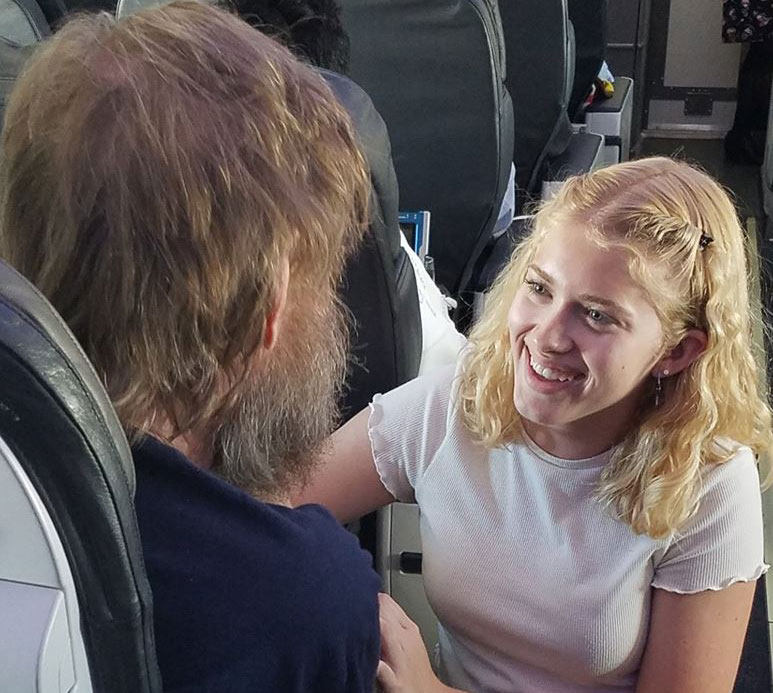 Clary Daly, a 15-year-old from Los Angeles, helped a guest who is blind and deaf feel comfortable on an Alaska flight this week, by signing into his hand.

When a guest who is blind and deaf traveled on an Alaska Airlines flight alone this week, a number of other guests, the flight crew and a very special 15-year-old girl worked together to make him feel comfortable and less alone. The result was a viral post on Facebook that had many people commenting that it was the feel-good story they needed to hear.

The girl, 15-year-old Clara Daly and her mom, Jane, were traveling home from Boston to Los Angeles. When their original flight was canceled, they were rebooked on Alaska’s flight to Portland and then onto Los Angeles.

Alaska Guest Lynette Scribner was traveling on the same flight as the Dalys. While in the boarding area, Scribner noticed another guest.

“I observed a woman signing into a man’s hand, so he could feel her words,” said Scribner. “After watching them for a few minutes, I realized the man was both deaf and blind.”

The guest, whose name was Tim Cook, was heading home to Portland where he’s a resident of Brookdale Senior Living. He had been in Boston visiting his sister, the woman in the boarding area with him.

When he boarded the flight, he had been assigned a middle seat. It was clear that Cook was traveling alone. The man who had the aisle seat next to Cook, immediately moved to the middle so Cook would be more comfortable. Scribner was seated in the window seat next to the two men.

“The man, who had given up his seat, did his best to assist with things like opening coffee creamer and pouring it in his coffee,” Scribner said.

Alaska flight attendants, who were talking about the situation in the back galley, proactively made an announcement to see if any guests onboard knew American Sign Language (ASL) to help establish a better means of communication with Cook.

One of them jumped on the PA and asked if anyone who knew sign language, would ring their flight attendant call button, not knowing that a sweet teen girl, who was more than willing to help, would answer the call.

The flight attendants explained that there was a guest onboard who was both blind and deaf and that the only way to communicate with him was by signing into his hand. Clara immediately jumped up and went to help.

“I sat with Tim a few times on the flight and toward the end for about 30 minutes,” Clara Daly said. “He just wanted to talk.”

Cook asked her lots of questions, and she sign-spelled the answers into his hand.

“Clara was amazing,” an Alaska flight attendant said. “You could tell Tim was very excited to have someone he could speak to and she was such an angel.”

Everyone sitting near Cook, including Scribner, appeared to be very taken by Clara.

Scribner posted the story on Facebook. So far, her post has received more than 110,000 likes, 40,000 shares and hundreds of comments praising both Clara’s actions and Alaska Airlines.

“After the flight, Clara told me she thought it was meant to be that our original flight was canceled and we were placed on this flight, so she could be there to help Tim,” Jane Daly said.
As for Cook, a service provider from Brookdale Senior Living met him at the gate after the flight arrived in Portland. He says the flight was the best trip he’s ever taken.