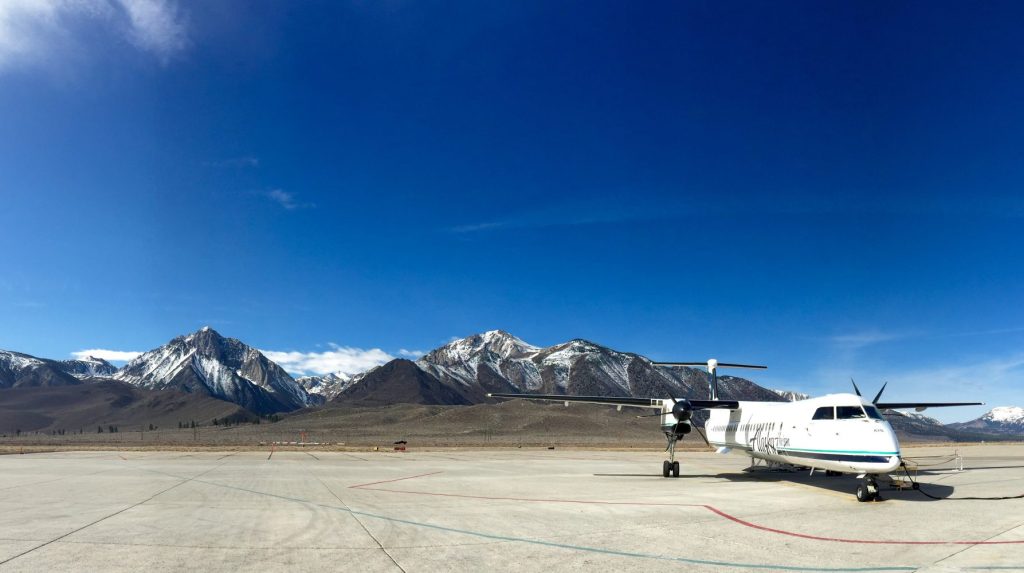 This week, Horizon Air is celebrating the 35th anniversary of its inaugural flight on Sept. 1, 1981.

Although Horizon Air and Alaska Airlines remain separately managed to this day, the two companies have been closely linked for nearly 30 years.

Both are subsidiaries of Alaska Air Group, and all Horizon flights are marketed and sold by Alaska. Since 2011, Horizon’s Q400 aircraft have featured Alaska’s familiar livery with the Alaska Native on the tail.

“Horizon has a strong legacy in the Northwest and beyond because of our exceptional delivery of service and the great people who make it happen seamlessly and safely every day,” says Dave Campbell, Horizon president and CEO. “Our growth over the years is something all of our team members should be extremely proud of, and as a member of the Alaska Air Group family I’m greatly looking forward to the coming years at Horizon. To our customers, I’d like to say thank you for your continued loyalty. It truly is our privilege to serve you.”

A new way of doing things

When it launched in 1981, Horizon was one of hundreds of new air carriers to pop up around this time in response to the Airline Deregulation Act of 1978. Many large airlines discontinued shorter routes across the U.S. in response to the act, creating a gap in the market that many people were eager to fill. One of those people was entrepreneur Milt Kuolt.

As far as airline debuts go, Horizon’s wasn’t ideal. That inaugural flight from Seattle to Yakima carried just two fare-paying passengers. The other 38 seats on the F-27 aircraft were filled by employees and friends. The flight’s captain had been hired away from rival carrier Cascade Airways a few months earlier. Unfortunately, old habits die hard. When he made the public announcement from the flight deck, he welcomed the passengers to “Cascade Flight 100.”

To Kuolt, this inauspicious first flight was nothing more than a tiny road block on his journey to build a great airline. A gruff, shoot-from-the-hip but fiercely loyal leader, Kuolt envisioned an airline that was different from all the others – one focused on excellent customer service and not simply getting customers from point A to point B. Horizon’s initial workforce of roughly 50 employees all shared that focus, eventually leading to Horizon’s first motto, “It’s our privilege to serve you.” 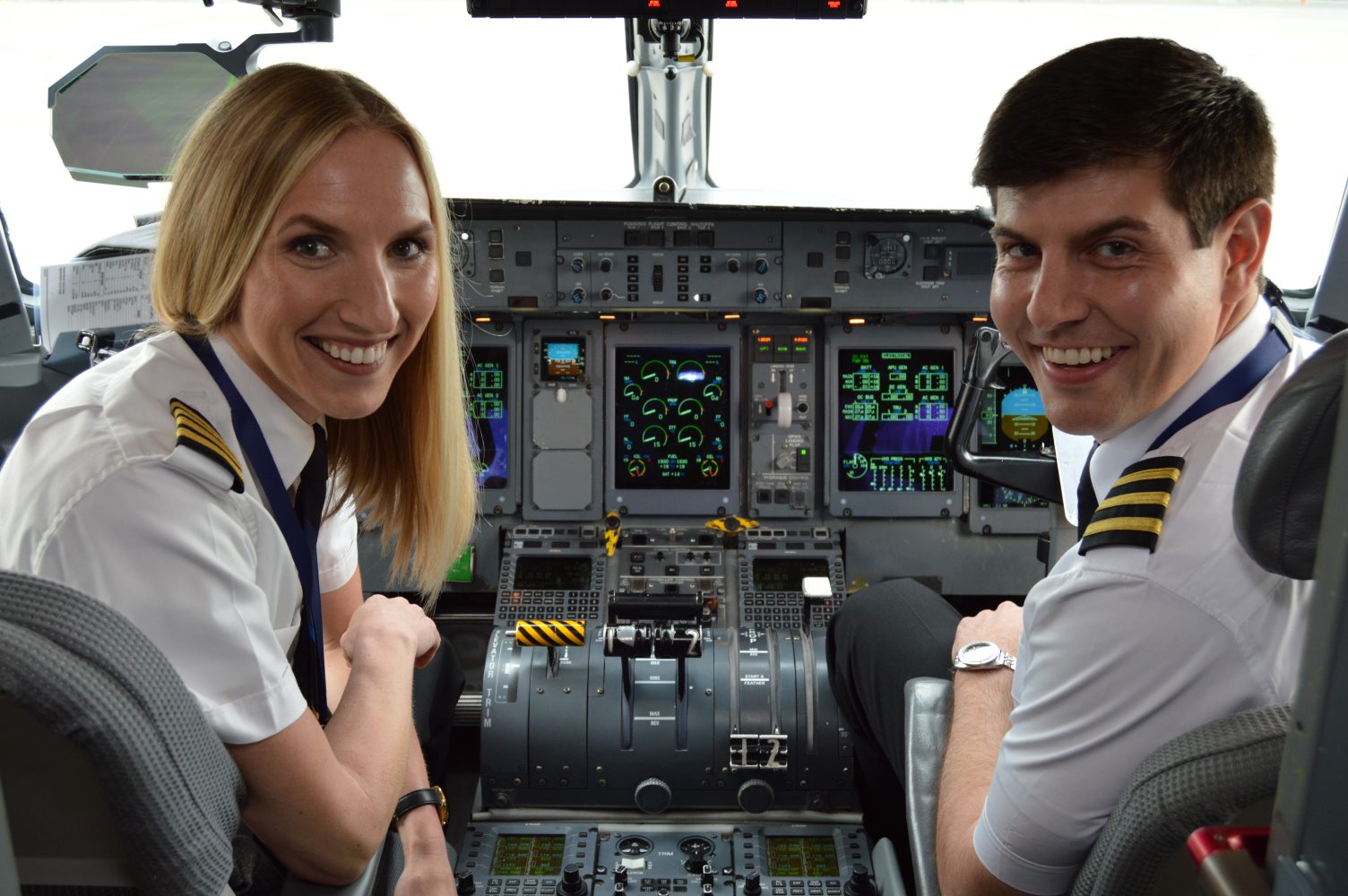 Throughout its history, Horizon has sought out innovative ways to make the flight experience more comfortable and convenient for its passengers. For example, when the small cabin and zero overhead storage on its Metroliner aircraft created challenges for carry-on baggage in the 1980s, Horizon began offering a planeside cart where travelers could drop their bags before boarding. That feature – eventually coined “A La Cart” – has become a favorite of travelers and is still widely used across the regional industry today.

That can-do attitude has been Horizon’s calling card from the beginning, with employees taking pride in doing whatever it takes to get the job done. Jim Cook, the manager of Horizon’s Redmond/Bend station, recalls those unconventional early years.

“Back in the early ’80s, we used our own cars to drive up and down the runways and provide braking action reports for our flight crews,” he says. “You’re a 19-year-old kid in your own car, getting to drive it as fast as you want, and there’s a little bit of snow and ice and then hitting the brake. How could that not be exciting?” 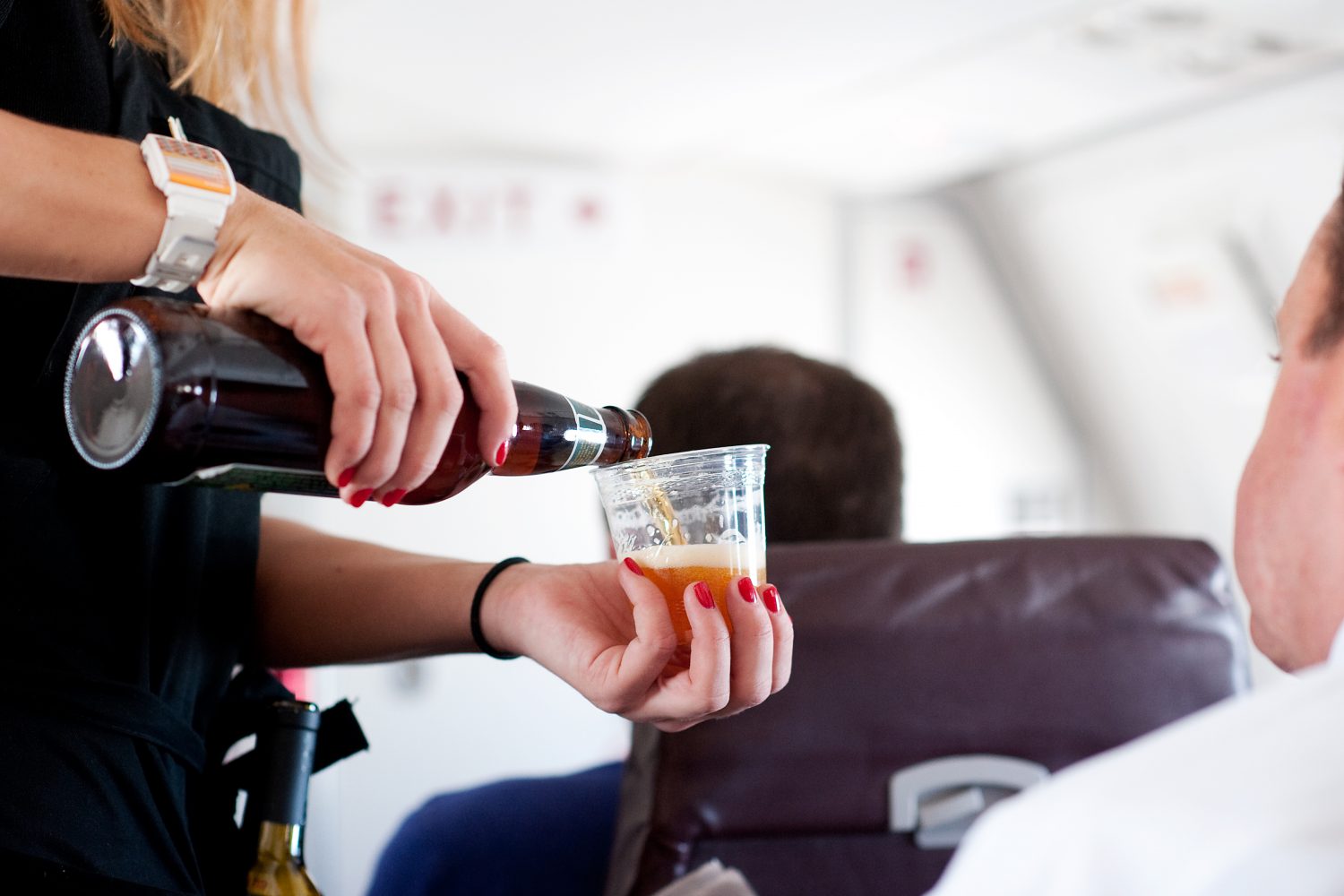 Horizon made history in 1995 by becoming the first airline to offer microbrews on flights at $1 a can. These days, it’s an even better deal – premium regional microbrews and wine are offered (to passengers 21 and older, of course) on Horizon flights at no additional charge.*

Taking care of our customers 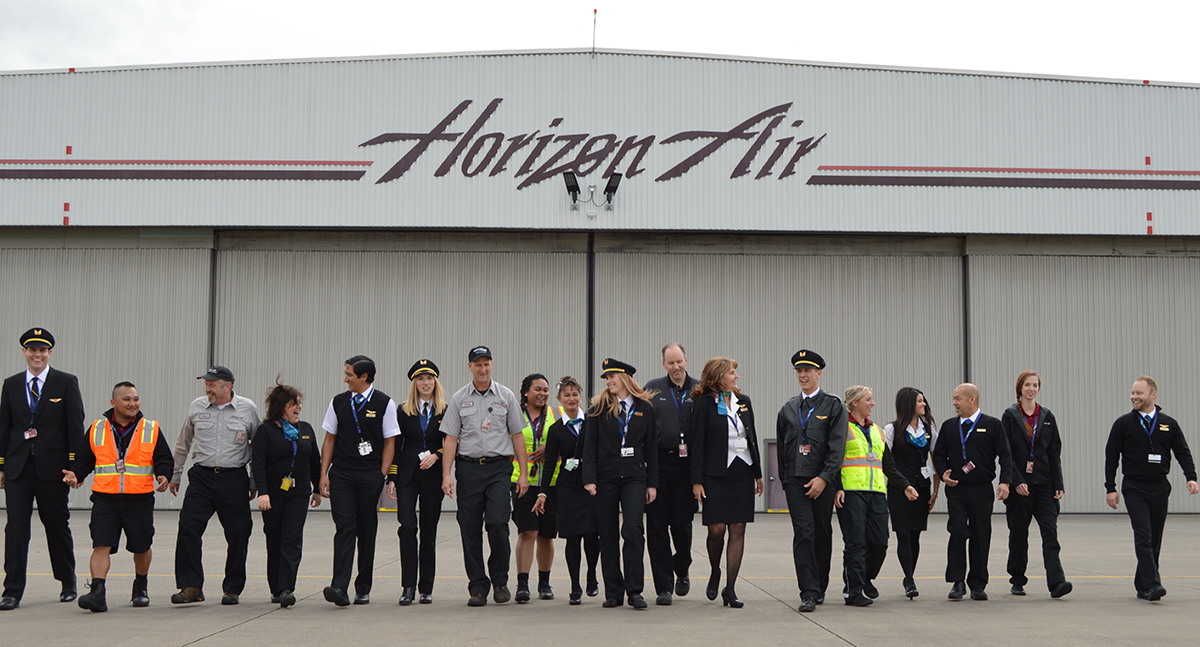 Of course, innovative technology doesn’t mean as much if they’re not accompanied by warm, personal customer service. That’s where Horizon’s people come in. Flight attendant Leslie O’Neil is one of countless employees who strive to make each passenger’s flight a good one, and she shares this story from a few years back:

Horizon has also tried to do its part to be a good neighbor to the communities it serves. The company was a trendsetter in the world of recycling, implementing a program for responsibly disposing of inflight service items as far back as the early 1980s. And its Q400s are as green as they come: They use 30 to 40 percent less fuel and produce 30 to 40 percent less carbon emissions than a comparably sized regional jet.

Teaming up with Alaska Airlines

During its early years, Horizon grew quickly thanks to the acquisitions of two other regional carriers: Air Oregon (in 1982) and Utah-based Transwestern (in 1983). But it was a partnership with a third airline that eventually secured Horizon’s future. In the mid-1980s, financial success was elusive because of the fiscal challenge inherent in the regional airline industry. But in December 1986, Alaska Air Group acquired Horizon, providing financial stability to the smaller carrier while giving the larger one valuable regional feeder traffic to its flights.

Many of Horizon’s technological innovations have come in collaboration with Alaska. Horizon and Alaska were the first U.S. airlines to sell tickets on the web and offer online check-in. The two carriers also introduced airport kiosks that make checking in at the airport a breeze. 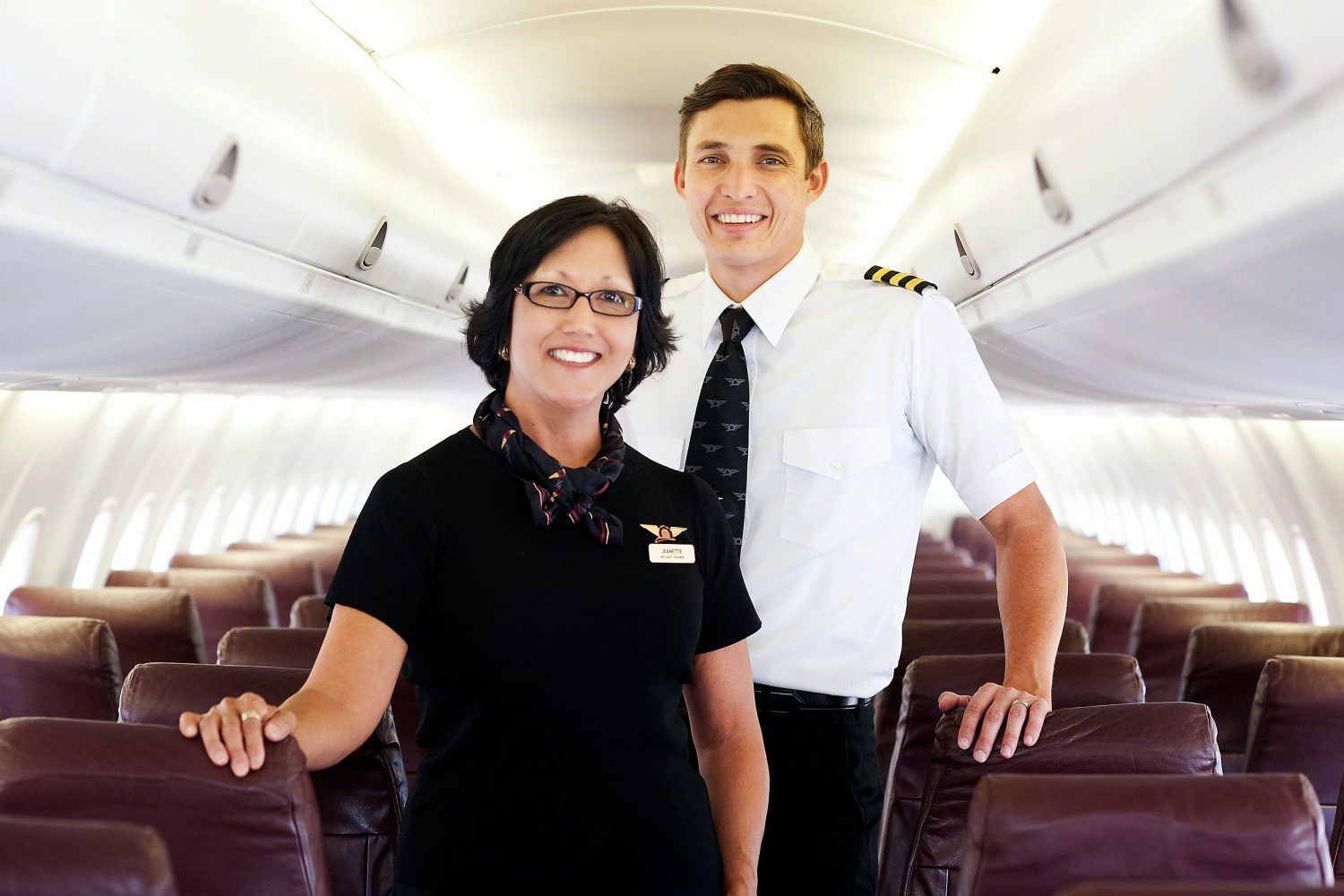 Horizon’s past is rich, but its future is also bright. In April, the company placed an order for 33 new Embraer E175 jets, which will allow Horizon to begin serving routes too far for its Q400s to fly. These jets will come with three classes of seating (first, premium and main cabin) and all the in-flight amenities travelers have come to expect, such as in-seat power outlets and Wi-Fi. In short, Horizon will have an inflight product that’s fully commensurate with the level of service its employees already provide to passengers.

To handle this influx of jets, Horizon will soon be ramping up its hiring. As it does so, it will seek to hire those deemed “Horizon people” – friendly, hard-working and passionate folks who will help maintain and build on the unique company culture established more than three decades ago.

*Free microbrew and wine service is available to passengers 21 years and older on Q400 turboprop aircraft only.