Squatting Suburbans, benching boats or lifting linebackers, no workout can prepare you for the ultimate challenge: a plane pull.

Update July 28, 2015, 2 p.m.: Team Russell successfully pulled the jet 25 feet in 16.9 seconds, with Team Joel coming in at over a minute. (A second pull by Team Joel actually netted a time of 15.6 seconds, but was unofficial.) All agreed that Strong Against Cancer was the real winner.

Alaska Airlines’ Chief Football Officer Russell Wilson and actor and comedian Joel McHale are facing off in an epic plane pull to raise money and awareness for Strong Against Cancer, a national initiative dedicated to ending childhood cancer.

Teams of 18 led by Wilson and McHale will compete to see who can physically pull a Boeing 737-800 25 feet in the shortest amount of time. They’re also competing to see which team can raise the most money for Strong Against Cancer.

Strong Against Cancer is a nationwide initiative inspired by the immunotherapy discoveries at the Ben Towne Center for Childhood Cancer Research at Seattle Children’s Research Institute. This initiative is a team effort on the part of hospitals, researchers, doctors, nurses, corporations, organizations and individuals. The captain of the team is Russell Wilson, quarterback of the Super Bowl champion Seattle Seahawks, who learned about immunotherapy during his regular visits to Seattle Children’s Hospital. Clinical trials for this therapy are now underway and are producing exceptional results in eliminating childhood leukemia. The aim of the Strong Against Cancer team is to create a national philanthropic initiative with worldwide implications for curing childhood cancers through these immunotherapy treatments. For more information or to make a donation, visit strongagainstcancer.org

The teams will face off July 28 in Seattle, in front of an audience of Alaska Airlines’ most loyal customers and guests of Seattle Children’s Hospital. The public can text “TEAMJOEL” or “TEAMRUSSELL” to 501501 to vote for their favorite team and donate $10 to the cause. (Texting charges may be applied by wireless carrier)

Want to learn more about Wilson? Check out our employee Q&A with the CFO here.

Wilson is an active volunteer in the Seattle community. Throughout the year, Wilson makes regular visits to Seattle Children’s Hospital to visit patients and their families. During the off-season, he teaches football and life skills to hundreds of kids at multiple football camps across the country at his Passing Academies.

Follow Wilson as he preps for the big day at #AlaskaPlanePull, @DangeRussWilson or text “TEAMRUSSELL” to 501501 to donate $10 to Strong Against Cancer and vote for Team Russell.

Joel McHale is one of the busiest actors in the business right now. He recently starred on the hit comedy series “Community,” which sixth season just wrapped on Yahoo. Most recently, he hosted the 2015 ESPYS which was broadcasted live on ABC.

In addition, McHale continues to satirize pop culture and current events each week on E!’s “The Soup.” His quick wit and sharp comedic timing have made the show a pop culture phenomenon. E! also recently picked up an unscripted comedy show from McHale called “The Comment Section,” based on the outrageous social media comments made about the biggest stories each week. McHale performs his stand-up act around the country to sold-out audiences.

Born in Rome and raised in Seattle, McHale was a history major at the University of Washington where he also was a member of their championship football team.

Follow McHale’s training and preparation for the pull at #AlaskaPlanePull, @joelmchale or text “TEAMJOEL” to 501501 to donate $10 to Strong Against Cancer and cheer on Team Joel.

With all that weight, how do you train for a plane pull? 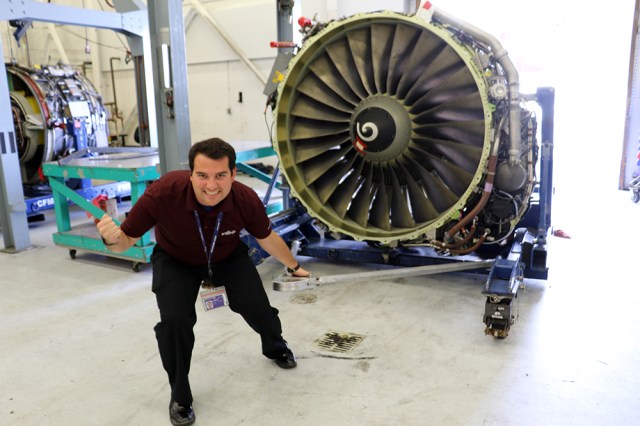 2. Eyes on the prize

Remember why you’re pulling and working so hard: to support cancer research. Keeping your mind on the good you’re doing might just give you the extra strength to make it the last few feet.