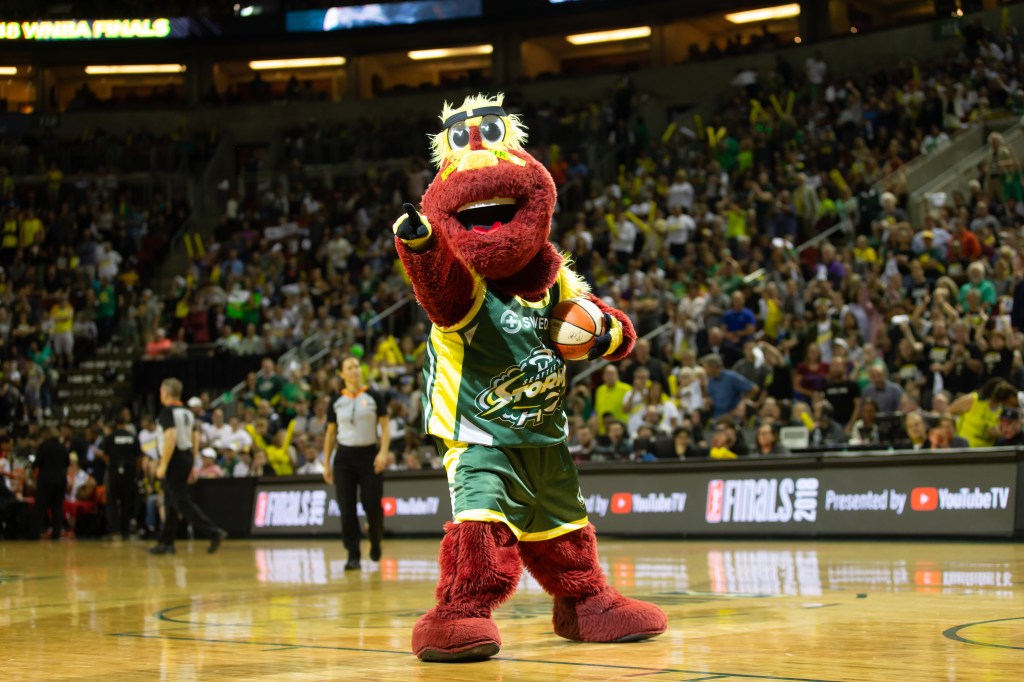 The Seattle Storm’s free throws will go a little further this season — about one million miles further.

Today, Alaska Airlines and Seattle’s defending WNBA champions announced an exclusive multi-year partnership and the “Free Throws for the Future” program, which will donate airline miles to community organizations working with young people. For every free throw made by Storm players throughout the 2019 season, Alaska will donate 2,000 airline miles. Last season, Storm players averaged 13.9 points per game from the foul line, which will now feature the Alaska logo on the Storm’s home court.

As they celebrated the new free-throw line sponsorship, Diana Birkett Rakow, Alaska’s vice president of external relations, and Storm CEO Alisha Valavanis took a moment to reflect on the values of partnership, leadership — and the commitment to elevate young people in our community.

DBR: Alisha, you and your team are fantastic partners and champions for so many around our region. You’re recognized for your humility and drive to grow the team, to learn together, and to excel — but to never rest on your laurels. You’re national champs, and back out there this year to strive for the next level of performance. That’s a good model for business, too.

A year or so ago, we talked about taking our partnership to a new level by empowering women and girls to own their strengths — on or off the court. My own grandmother was a brainy powerhouse, but I think it took her until she was in her 80s to fully own that. As for sports, she used to remind me that sweating wasn’t appropriate for girls (so I went ahead and played ice hockey). Times have certainly changed, but many kids don’t have enough champions — people who say “who you are is amazing, and you CAN play ball, or fly airplanes, or make robots, or work in finance, or lead.” At Alaska Airlines we’ve been talking a lot about how, as a community, we lift and empower young people furthest from opportunity to realize great futures — through inclusive education, mentors and models, exposure to career options and more.

When you’re building a roster for the Storm, you’re looking for amazing basketball talent — but probably some other characteristics of great team players. Some things that won’t necessarily be taught in a classroom, but might be relevant for any career path. What are the elements of great players — and leaders — that you look for to make up a championship team?

AV: I grew up in a big family, I have an identical twin and four other siblings, so being on a team started very early. Long before I understood team dynamics and what it would take to cultivate a winning team, I learned the fundamentals from my family unit. We shared common values instilled in us by our parents: honestly, kindness, generosity and passion. There was also space for our individuality, curiosity and adventure. When I think about the kind of leader I am today and some of the principles used to build the Seattle Storm, I think about those early lessons. Successful teams share core values that create the culture needed to achieve the highest levels of success, oftentimes in the face of great adversity.

But it is also true that winning takes talent, in the front office and on the court. In the WNBA we have the most elite women’s basketball players in the world; these athletes have spent decades committed to their game. We are fortunate to have a team that has been led by the best point guard in basketball history, Sue Bird. We have an ownership group and a front office and a basketball staff that are all working from the same playbook. There is clear vision and a relentless commitment to team that is in pursuit of success and committed to it. So, if I had to put it in one word it would be “culture.” Our culture created the space for talent and teamwork to achieve the greatest results possible; championships!

DBR: Culture matters so much! At Alaska, it is one of our greatest areas of focus. But I also wanted to ask you about how you share the story of the team. I saw recently that the league secured additional coverage through CBS Sports Network; congratulations! Why is that important?

AV: I believe the growth of this league is directly correlated to the visibility of this league. The exposure that the league gains through deals like the one with CBS Sports Network is imperative to developing new fans and exposing the country and the world to the WNBA. This season they will carry 40 live WNBA games, including six Storm games. Between the league’s deals with ESPN and CBS Sports Network, our partnership with JOEtv, and live-streamed games on Twitter and WNBA League Pass, people will get to know Storm Basketball.

DBR: Congratulations! OK, so my son loves the Storm, and proudly wears your gear. When he went to a game, he was impressed how fast the Storm players are. Makes me wonder — what are the demographics of your fan base? Does it skew female or are men watching women’s sports? Might my son be part of a new generation who does watch women’s sports?

By the way, we also recently introduced him to the Rat City Rollergirls — they are a good example of resilience! Those women are knocked down over and over, and get right back up and GO. And then hug each other at the end! Sportsmanship AND drive.

AV:  That’s awesome, Diana, I love that your little one is getting exposure to all types of sport!

One of my favorite games last year was when I got to sit next to your son because it gave me the chance to experience the game from his perspective. There’s so much joy in sports and so many fantastic role models. It’s special to see how kids respond to that. It reminds me of one of my favorite memories during the playoffs last year. I was at a coffee shop — very Seattle, I know — when a father approached me and said that his little ones were chanting “PLAYOFFS!” while eating their cereal that morning. They are part of a generation that is growing up in a time when little girls and little boys can have strong female role models on the court.

Our fan base is incredibly diverse, and as far as numbers go it’s fairly equal between women and men for attendance. But what continues to be a top priority is to get families and kids out to games. It’s awesome entertainment that has the potential to really drive positive societal change; imagine all our children given the opportunity to look up to elite female athletes as well.

DBR: Really cool, thank you for being such great role models. Now, one final question — What’s your favorite place to fly, nationally or globally, and why?

AV: I absolutely love to fly. I love traveling around the country and the globe whenever possible, and basketball has definitely given me the opportunity to do that! One of my favorite spots every season is Chicago because I get the chance to meet up with family and spend time with them. New York is another place that’s circled on my calendar every year. I love the energy of New York and the restaurant and art scene. But of course, there’s no greater feeling than coming back to Seattle, flying over Mount Rainier and Puget Sound, and finally touching down at home.

AV: Thank you, Diana. We’re thrilled to partner and excited to team up to make a positive impact in Seattle.