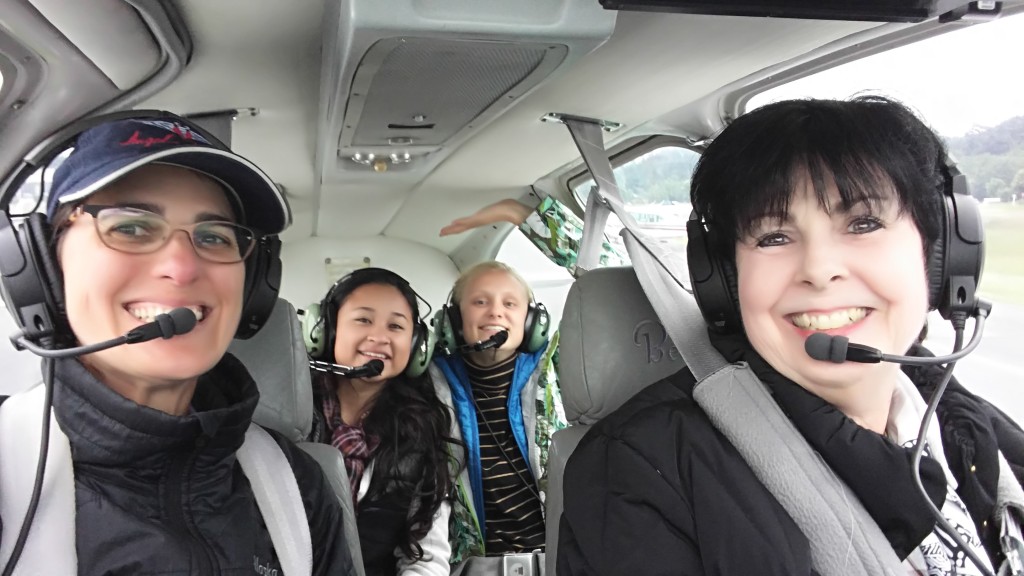 Scratch the surface of almost any pilot and you’ll find a kid who dreamed of flying.

When Alaska Airlines First Officer Erin Recke was little, she wanted to fly jet fighters. But it wasn’t until one significant day in her mid-20s when her dream really took off.

“I took a flying lesson just for fun,” she recalled. “But I fell in love the minute we left the runway. I knew right then that flying was going to be my career.”

She built her private pilot’s license into a commercial one, as her planes grew from a single-engine prop to a corporate jet to CRJ’s at a regional airline based out of Atlanta. But the Pacific Northwest called her back home, as did the chance for a job at Alaska.

“I knew the odds of them hiring me would be much greater if I had a Seattle address,” she said, “so I moved here and commuted every week to ATL.”

Her return also gave her the chance to reconnect with a lifelong friend Maureen Griggs, who owns a 1964 Beechcraft Bonanza. And the chance to use her time off to do what she does at work: Fly.

But this time, she would fly for those most in need.

Flying to serve others

Like many Alaska Airlines pilots, she flies missions with Angel Flight West, a nonprofit organization that arranges free, nonemergency air travel for children and adults with serious medical conditions and other compelling needs. In addition to pilot volunteers, Alaska has partnered with Angel Flight West for 15 years by donating miles, cash and flights for those in need.

Recke is very active in Alaska’s annual Aviation Day, which aims to show students a path toward careers in aviation and aerospace, by allowing them to interact with industry professionals.

Recke joined the Washington Pilot’s Association, which recently made a special request: Give the 30 seniors of Orcas Island High School a graduation present they would never forget.

A few weeks later, Recke and Griggs and the Beechcraft were among a dozen aircraft lined up along the grassy runway at the island’s airport.

“The kids were allowed to pick whichever plane they wanted. It felt like we were back in school too, waiting to be picked, hoping that we wouldn’t be chosen last!” she said with a laugh.

Memories that will last a lifetime

It turns out that they need not have worried, as two girls were thrilled to discover that their plane had an all-woman crew.

By prior agreement, the planes set off together to give the seniors yet another surprise: a huge congratulations sign that someone had set up in their backyard. After that, they were on their own.

“Neither of them had been in a small plane before,” Recke said. “They were super excited that we were just four women in an airplane, with all the time in the world and no agenda.”

The student’s improvised flight plan included fly-overs of their homes, their high school, and even a laden ferryboat so they could count how many cars were on board. After an hour or so, the Beechcraft reluctantly returned to Earth.

“We were the second to take off,” Recke proudly reported. “But we were the last to land.”

As they parted ways, the girls still beaming, they declared that the flight was the best thing that ever happened to them. Sounds familiar, doesn’t it?

Perhaps one or more members of the Orcas Island High School Class of 2017 will one day be a member of a future first officer class at Alaska Airlines.