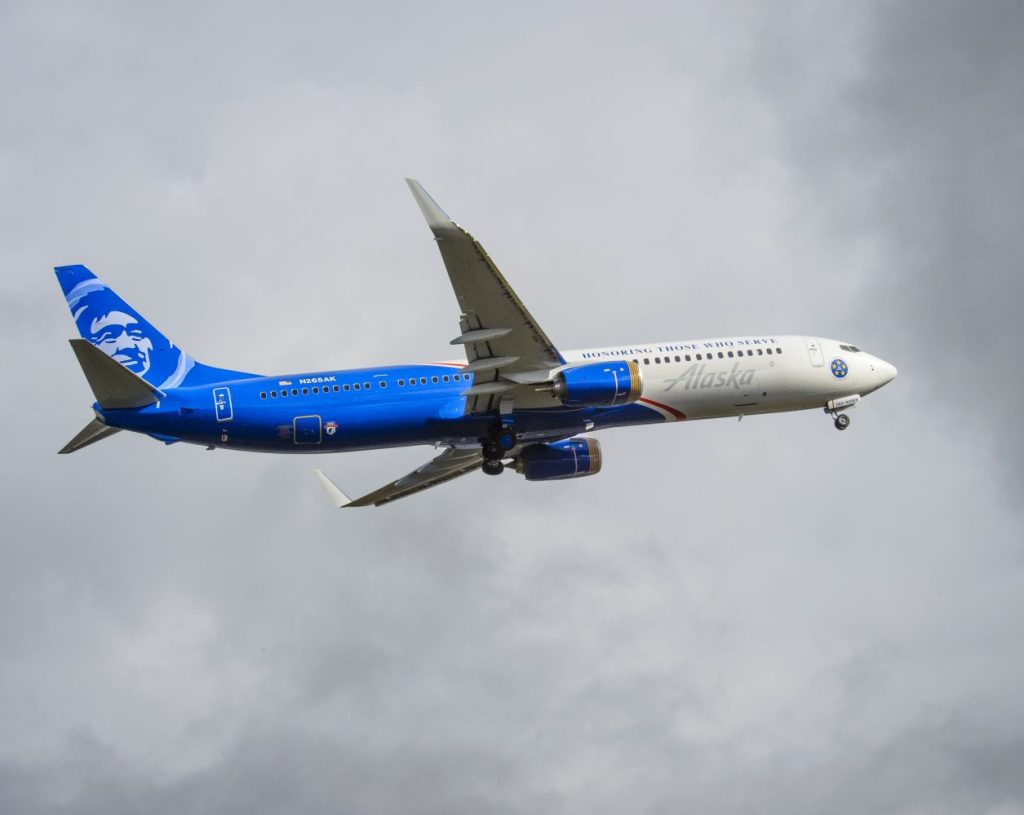 By offering complimentary travel to veterans on Honor Flights, priority boarding for active duty military and donations to numerous non-profit military organizations, Alaska Airlines has long been a proud supporter of the United States military. But today, Alaska unveiled its largest (and heaviest) honor to date – a Boeing 737-900ER with a customized paint job to honor the brave men and women of the armed forces and their families.

The livery is part of a new initiative called “Alaska Airlines Salutes,” which combines the many employee-led efforts to support and honor those who serve. The design features an Alaska Airlines Salutes medallion and a fallen soldier badge, with the Battlefield Cross to honor those who have made the ultimate sacrifice. The plane also features five rings surrounding the engine, representative of the five branches of the United States military, and American flag winglets.

The three technicians are part of a group of employees who created Alaska’s Fallen Solider program in 2011. The program ensures that the remains of fallen soldiers are transported to their final resting place in a respectful and dignified manner and includes customized baggage carts that the group has delivered to six of Alaska’s largest airports.

“With Alaska Airlines’ history of having outstanding and unique liveries, we knew that we could come up with one that would proudly honor our United States military,” said Kruse.

After their pitch meeting with the entire executive team, Kruse, Megran and Bowden were prepared to answer several questions. However, when their presentation was over, Alaska Airlines CEO Brad Tilden and other company leaders were immediately supportive.

“Leaders at Alaska empower us to take action. That’s really what the ‘Alaska Spirit’ means to me – we’re empowered to have dreams. For Brian, Kevin and me, this airplane is a dream, more than four years in the making, that has finally become a reality that we can share with the world,” said Megran. “It’s going to have such an effect on so many people’s lives. They’ll see the airplane and know that Alaska cares about them.”

Many of the ways in which Alaska Airlines supports the military are the direct result of employees’ efforts.

The Alaska Airlines Fallen Soldier Program was pioneered by a group of maintenance employees in 2011, who believed that the remains of those who made the ultimate sacrifice deserved special care and attention upon their return to their respective burial sites. The group volunteered to design and build a cart dedicated solely to transporting fallen soldiers, and researched the protocol of each branch of the military for handling soldiers’ remains. Alaska’s protocol includes wearing special vests, notifying flight crews and providing escort for the remains from the time they arrive to the time they depart.

Today, Alaska Airlines has dedicated carts in Anchorage, Seattle, Portland, San Diego, Los Angeles and Washington, D.C.. While the carts remain under Alaska’s care at each of these locations, they are available for any airline to use when transporting soldiers’ remains.

“When I flew to Fairbanks to tell Robert the news, his face lit up,” Romano said. “Robert was a beacon in the Fairbanks community, and he told me that with this trip, his bucket list was finally complete.”

Today, Alaska Airlines has flown more than 600 World War II, Korean War and Vietnam veterans from Alaska, Washington and Oregon to Washington, D.C. to view their war memorials through the National Honor Flight network and the Last Frontier Honor Flight.

In 2016, Alaska Airlines received the Secretary of Defense Employer Support Freedom Award for its support of National Guard and Reserve employees. More than 2,000 companies were nominated for the award and Alaska Airlines was among the 15 companies selected this year.

Alaska Airlines works with several military support organizations to ensure that those who serve their country return to a welcoming and supportive community. Alaska Airlines Mileage Plan members can donate their miles to Hero Miles, a program that provides air travel for wounded, injured or ill service members who are undergoing treatment, and their family members. Since 2014, more than 7.4 million miles have been donated to this cause.