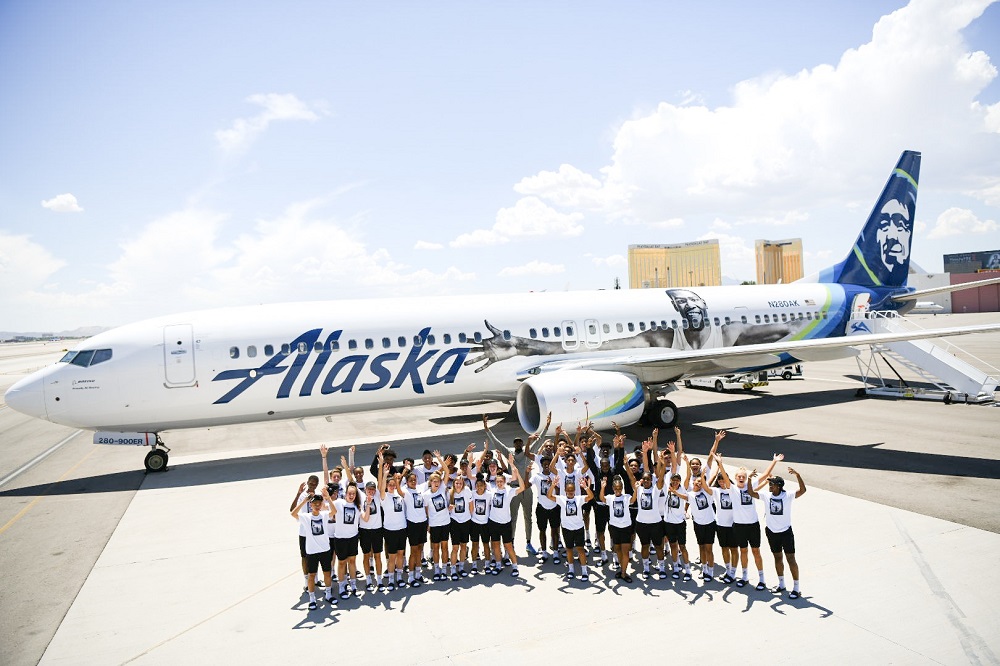 All 46 players with Kevin Durant outside his KD-branded plane.

When Kevin Durant traveled to basketball tournaments in high school, everyone piled in a van. There was no smoothie bar, sneaker-lacing station or All-Star guest appearances. And definitely no airplanes.

“Playing AAU basketball as a kid was a grind,” Durant recalled. “Most of the teams, mine included, usually don’t have a lot of financial support, so you’re doing everything you can on a dime.”

Today was a different story. With music pumping through speakers and Durant’s photo stretching from nose to tail, 46 aspiring athletes boarded Alaska Airlines “Flight 35.” The KD-branded Boeing 737-900ER made its first appearance during the Western Conference Finals and will be in fleet for two years. Today, the plane made a special trip, bringing four top teams from Los Angeles and Oakland to the Bigfoot Hoops Las Vegas Classic.

“Every achievement in youth basketball is a really big one,” Durant explained. “Some of the top teams in the country compete every year at Bigfoot, so to make it this far is a huge accomplishment.”

From the minute he got on the airplane’s PA system, it was clear Durant was here for one reason: surprise these players and have some fun.

“I’ve flown some charters but nothing like this,” said Alaska Airlines Captain Ben Corner. “It was pretty cool to see the kids’ eyes light up.”

The high schoolers had no idea a legend would be joining them. As soon as Durant boarded the aircraft, the plane erupted with cheering.

“I was excited but nervous at the same time,” said Leah Howard, a Cal Sparks team junior. “I’ve never met an NBA player.”

Every summer, the Golden State Warriors forward attends youth basketball tournaments and spends time with players. He’s never flown with them to mark the occasion.

“At this age, these kids don’t think they are going to make it,” Durant said. “That’s a hard place to be.”

Sophomore Solomon Jones is one of the youngest players on the I Can All-Stars team, surrounded by seniors getting ready for college.

“This trip is a wake-up call,” he said. “You’ve got to keep being you and working toward your goal.”

Inspired by his “Rise. Grind. Shine. Again” motto, KD’s team, Nike and Alaska Airlines partnered to create a unique experience for the players during their layover at the Oakland International Airport. Not only did they get to meet one of their idols – each player received Durant’s latest signature Nike shoe, the KD11.

While taking selfies with Durant and dancing with teammates, the high schoolers sampled a protein-packed breakfast bar and personalized their new kicks at a custom lacing station.

On the last leg to Las Vegas, Durant took the beverage cart down the aisle, personally delivering a signed copy of Slam Magazine to each player with their picture on the cover.

Today’s journey ended in high spirits, but it’s just the start for the 46 players aboard Flight 35. Throughout the tournament, Durant hopes they remember why they’re here.

“It’s really easy to get caught up and forget that the reason you’re doing it is because you love the game of basketball,” he said.