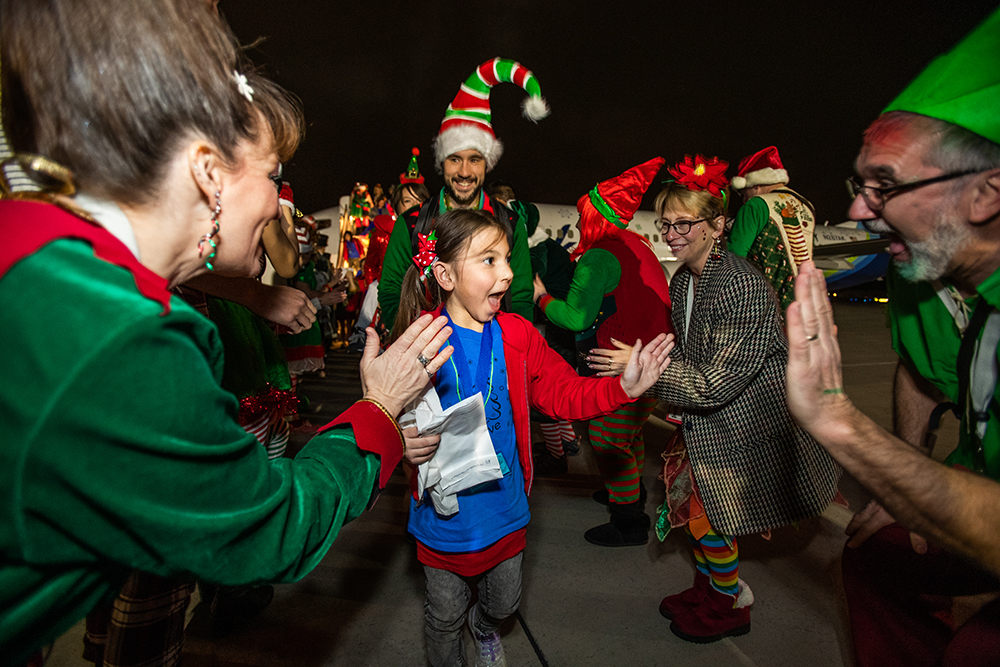 Fantasy Flight in Spokane, Washington and the North Pole. (Photo by Rajah Bose)

This weekend, our annual Fantasy Flight arrived at the “North Pole” to bring smiles and holiday cheer to 65 children, many of whom live in shelters or transitional housing.

For most of the kids, it was their first time on an airplane. Flight 1225 (as in “Dec. 25”), not only departed Spokane, Washington for Santa’s hometown at 4:45 p.m. this Saturday, but we also threw an elaborately decorated party – a true winter wonderland.

For children who don’t have much, the special treatment provides a momentary lift this time of year – and memories to last a lifetime. Since 2008, Alaska Airlines has sponsored the annual Fantasy Flight, with many Alaska and Horizon employees volunteering as “elves” ready to make magic happen. 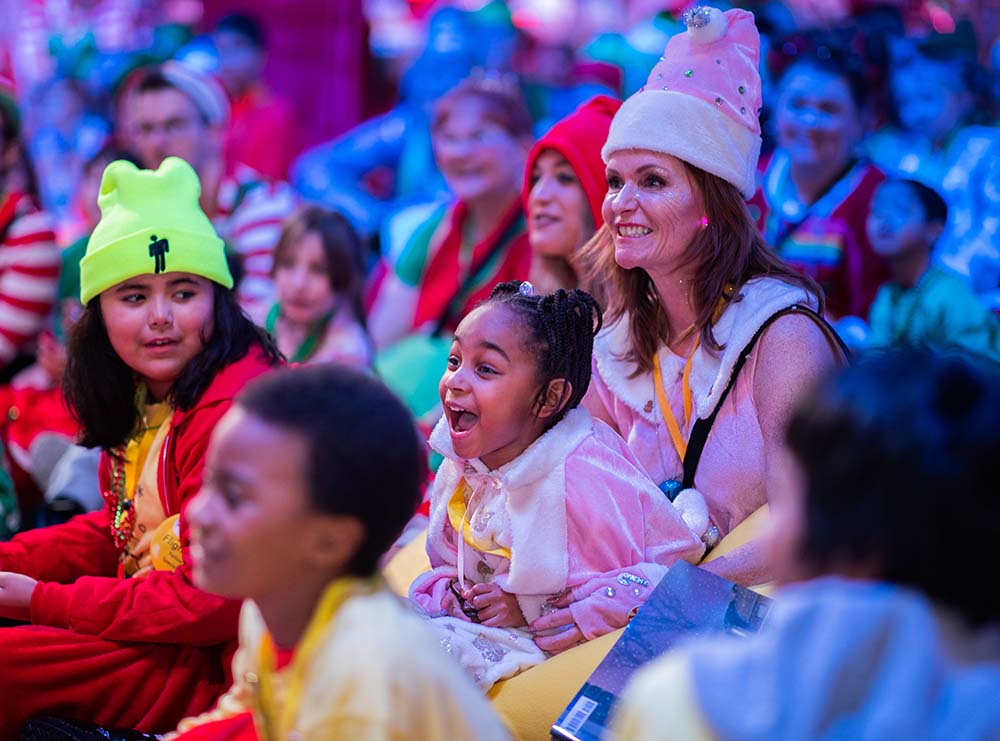 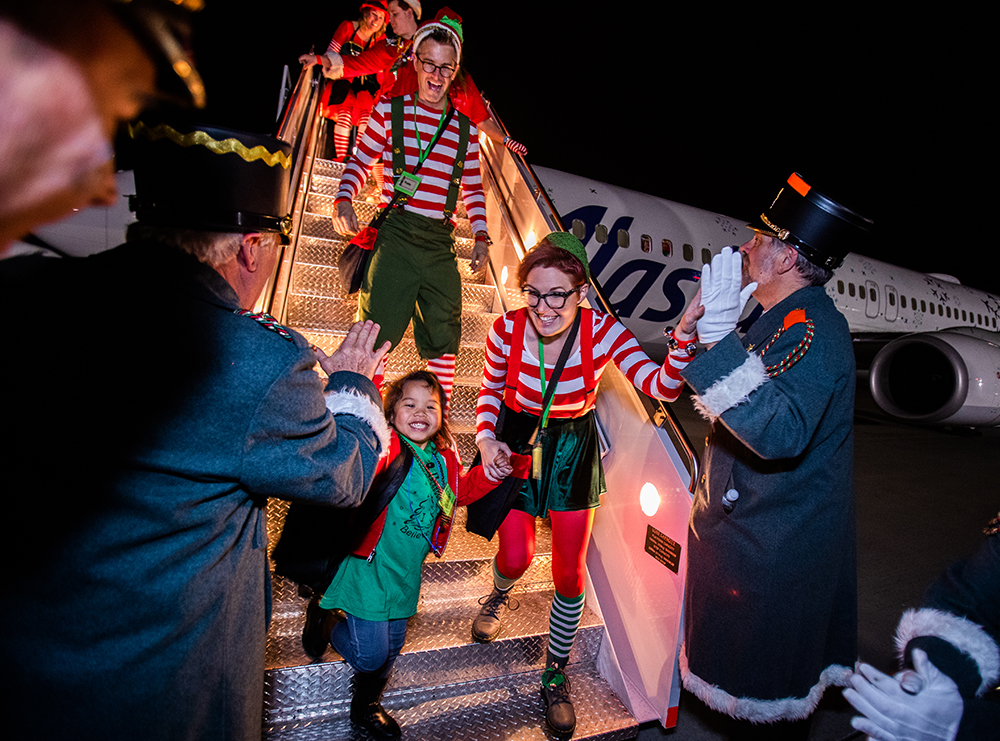 Nonstop to the North Pole

The journey begins to Spokane International Airport, where each child is given a “passport” to the North Pole and a personal “elf” that takes them under their wing.

Volunteers are required to dress in their best elf-wear and develop their individual elf history to help the kids believe their North Pole adventure is real. The flight crew usually dons Santa hats or antlers. The annual event is organized by nonprofit Northwest North Pole Adventures, and numerous companies donate jet fuel, food, toys and other items.

After passing through airport security, the children are presented with backpacks and are greeted at the Alaska boarding area with festive music and food.

Just before it’s time to board the plane to the North Pole, the elves begin shouting, “We’re going home! We’re going home!” The children and elves board an Alaska jet given the call sign Santa 1, and the plane departs into the sky above Spokane.

Halfway through the 40-minute flight, the children are instructed to close their window shades and recite a magical chant that would allow them to enter Santa’s airspace. Minutes later, they arrive at the “North Pole” – in reality, a spruced-up hangar at the end of the Spokane airfield. It has been transformed into a glittering fantasyland of Christmas fun with decorations, games, jugglers, magicians, face painters, a Polar Express train set, and fancy sugar cookies and other sweets.

Santa and Mrs. Claus arrive, and each child gets to visit Santa and receive a gift they previously requested in a wish letter. And, the list is checked to ensure every young traveler is in Santa’s book under ‘nice’. 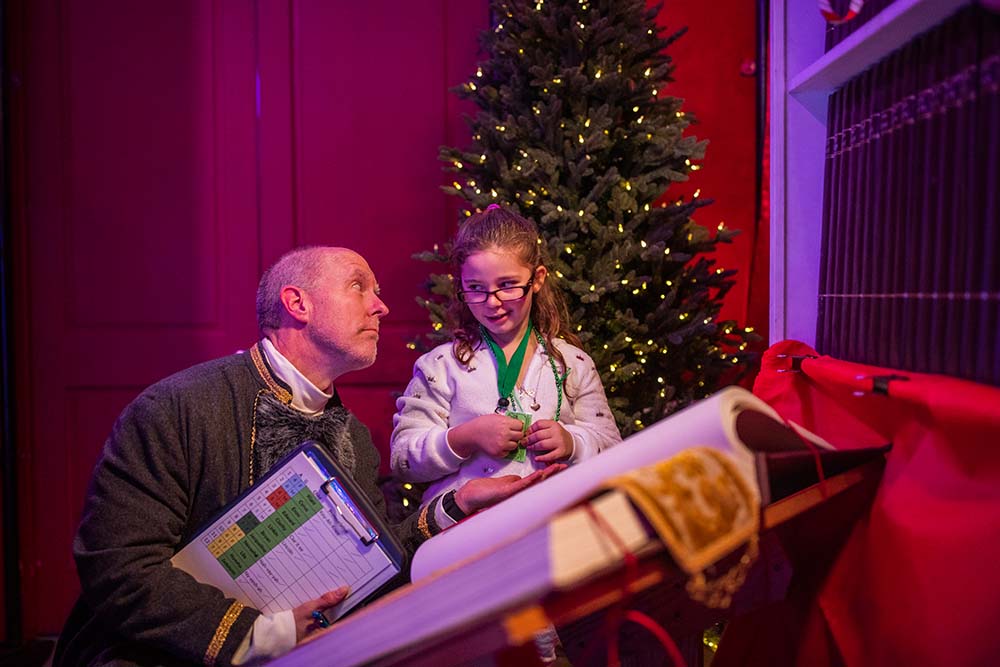 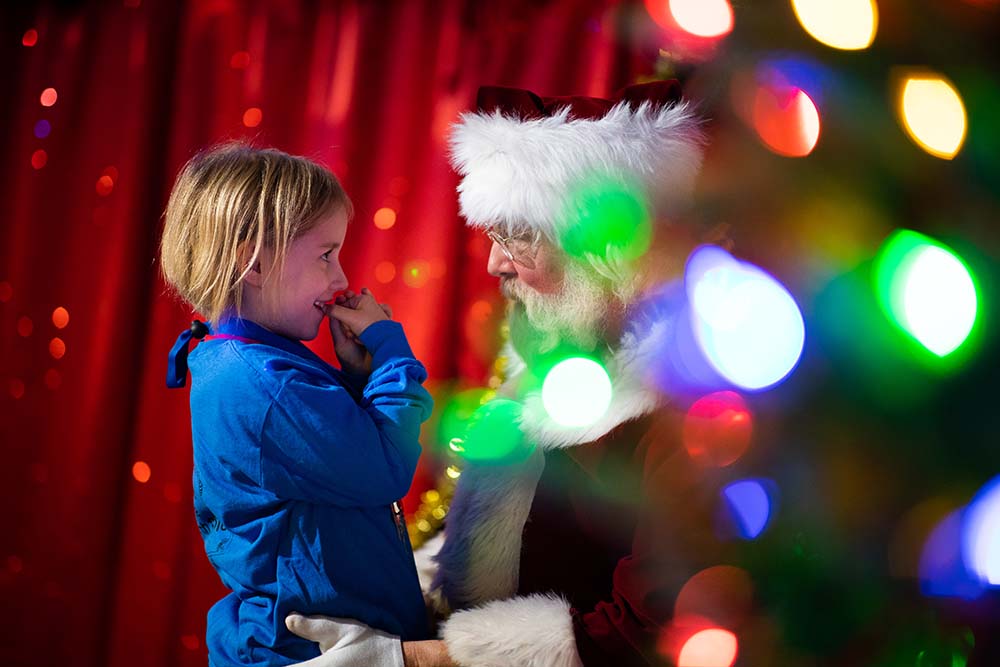 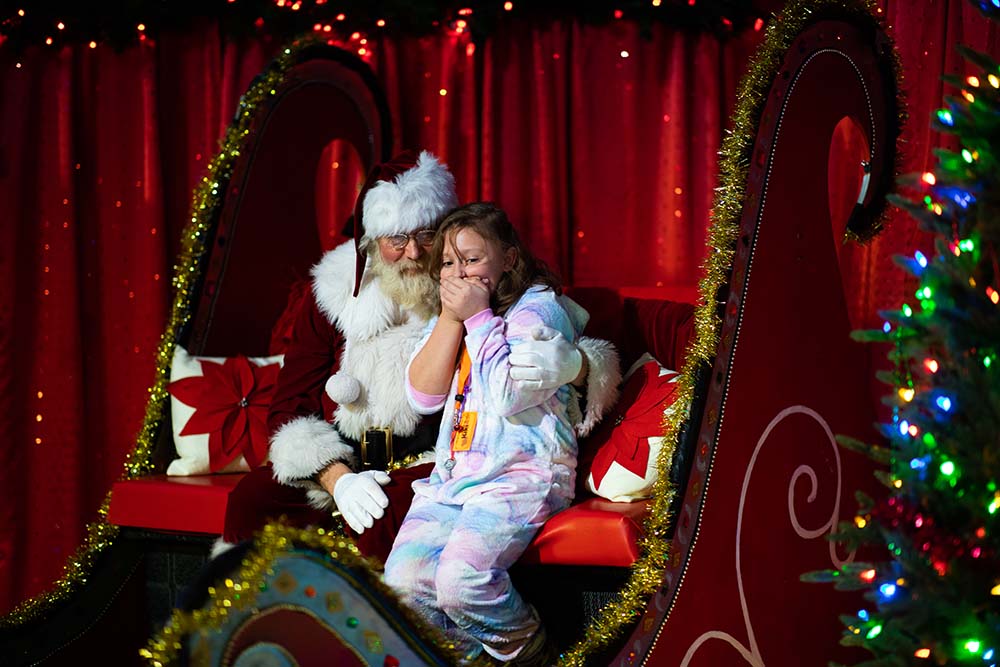 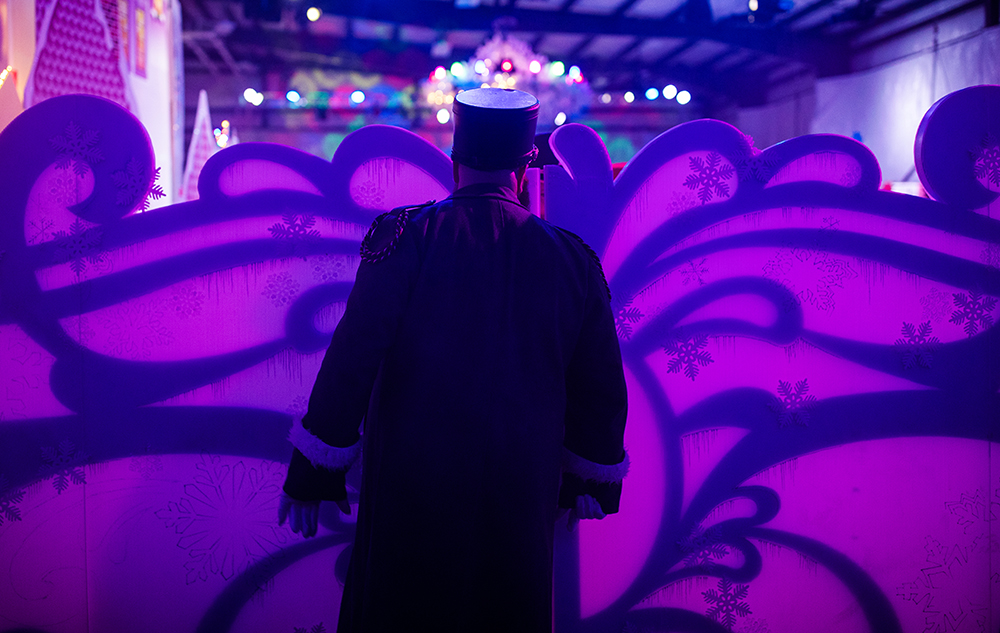 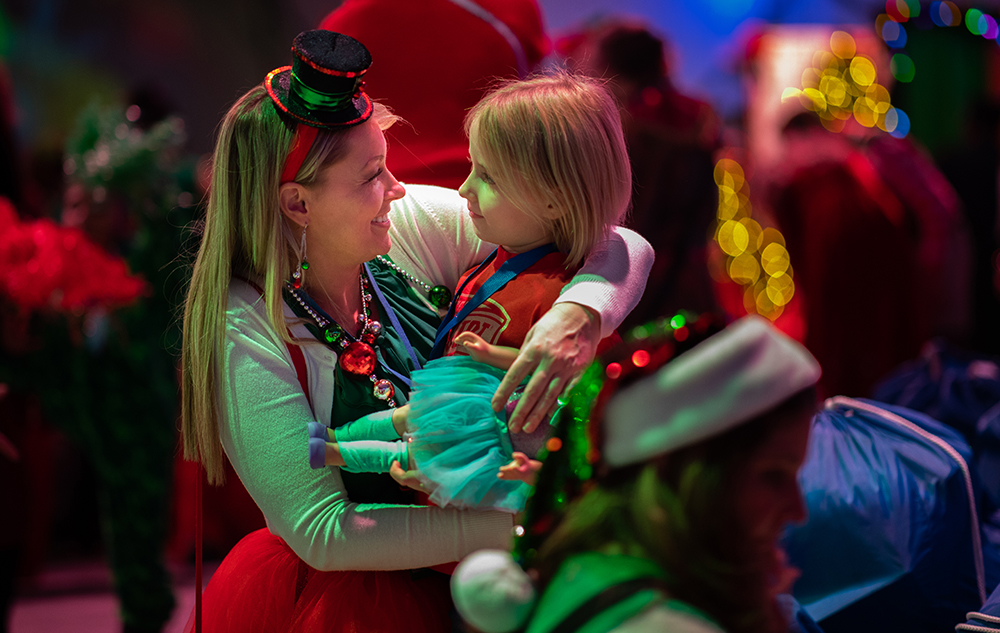 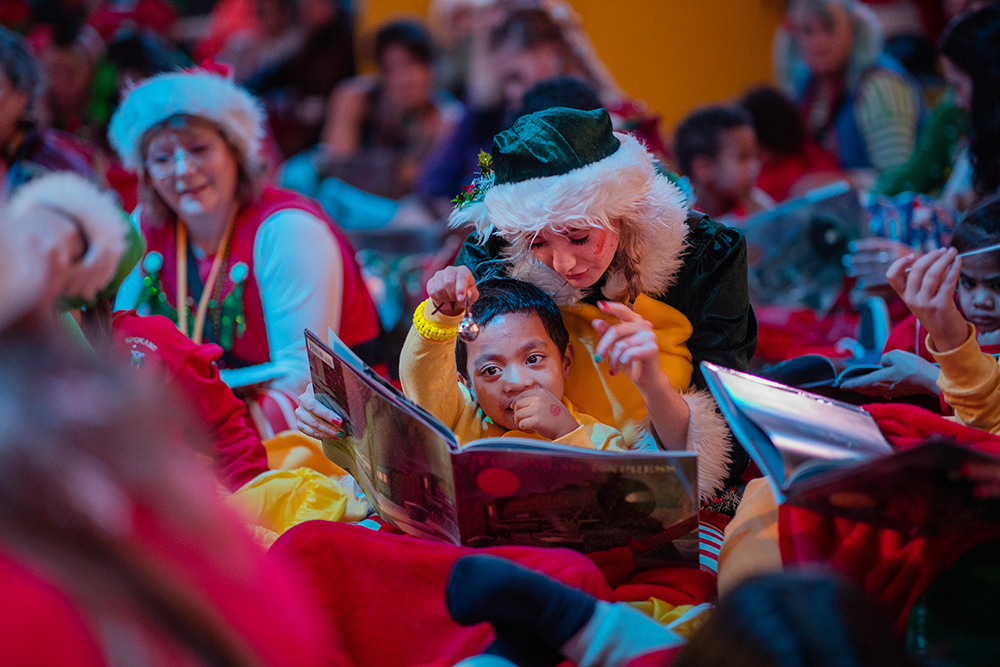 Memories for a lifetime

While happy spirits fill the air, there are many poignant reminders of the difficulty each child faces. One year, after visiting a booth to select pajamas, a young girl put on her purple PJs as fast as she could, near tears, because she’d never owned pajamas before.

“The most magical part of Fantasy Flight is how happy it makes the kids,” said one of our elves. “Not only do we help them reach the North Pole where there is literally unlimited ice cream, hot chocolate, and cookies, but they get to be the craziest, happiest kids they want to be because a lot of them haven’t been able to be kids at home.”

As the night winds down, the children gather around to hear Mrs. Claus read “The Polar Express,” the beloved story about a magical train that takes a group of children on a journey to the North Pole to meet Santa. 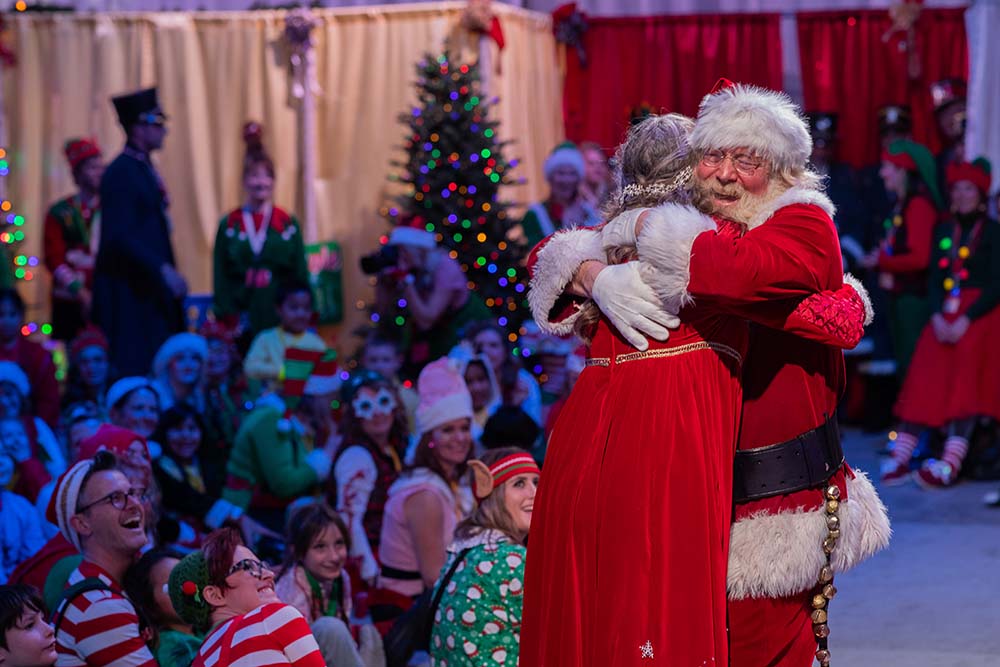 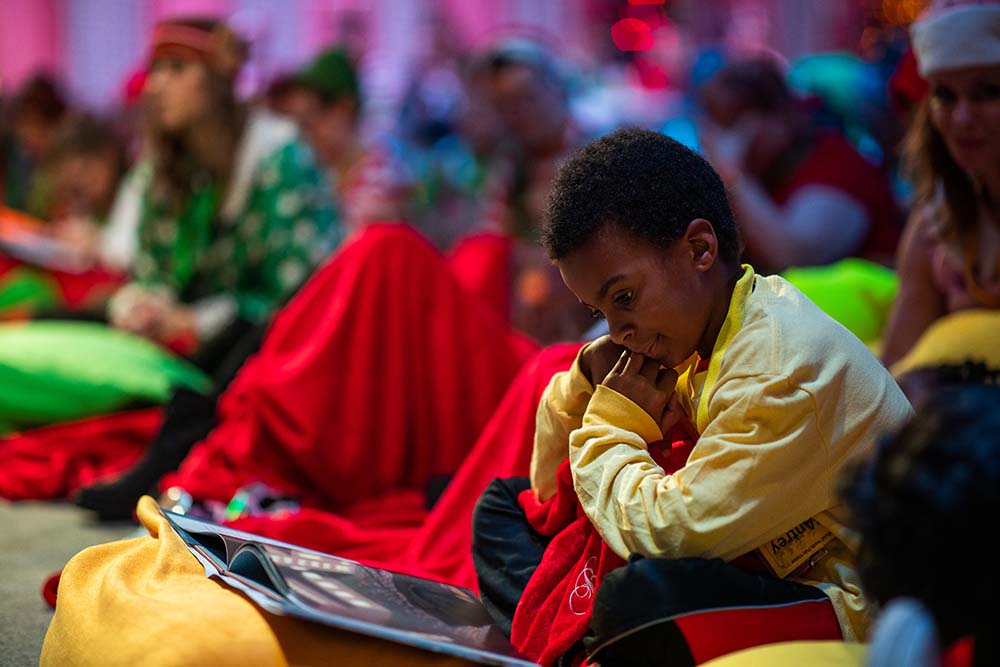 “Most of the little ones arrive at the airport a little timid and shy and by the end of the night they are screaming and smiling and running around with their new toys,” said one of Santa’s helpers. “Seeing their faces light up when they see Santa and Mrs. Clause is unforgettable.”

More photos of this year & past Fantasy Flights