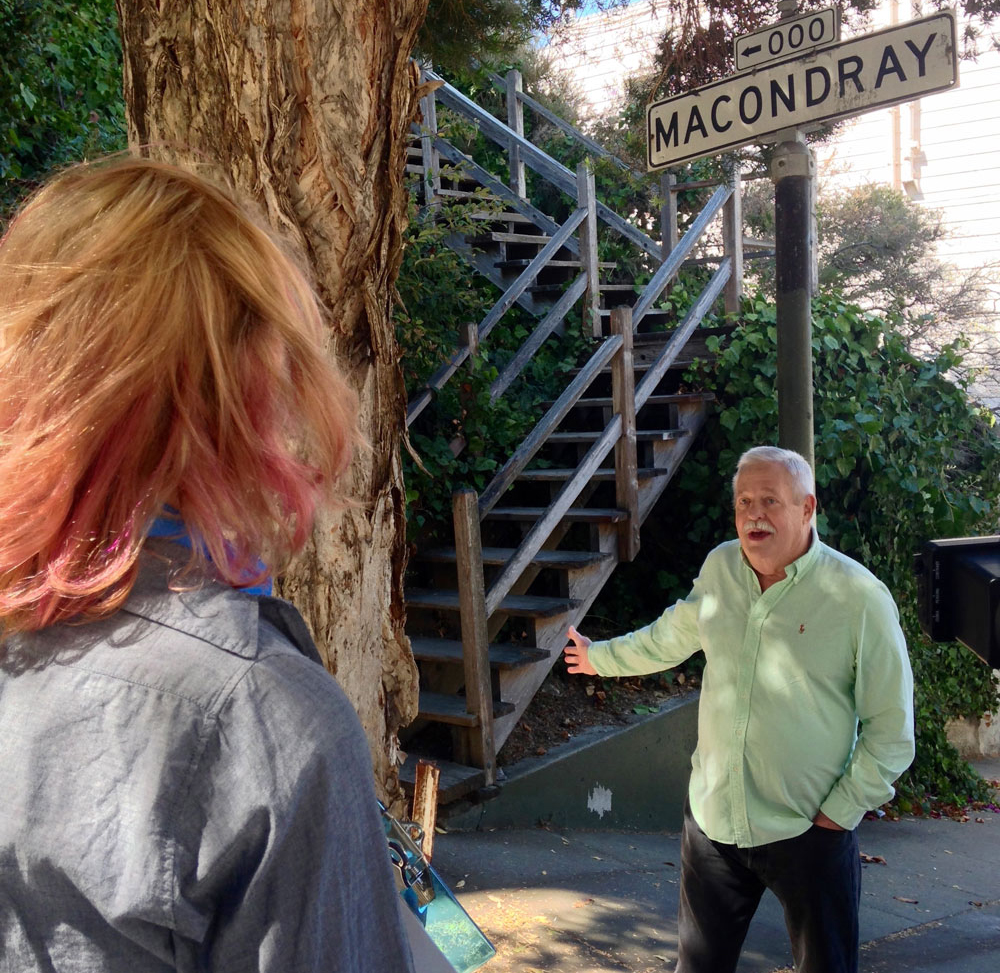 Mary Ann Singleton’s journey through 1970s San Francisco was deliciously specific — starting with her three Irish coffees at the storied Buena Vista Café and her introduction to the produce-aisle pick-up scene at the Marina Safeway. For more than 40 years, author Armistead Maupin has invited readers of his “Tales of the City” newspaper serial and subsequent novels to walk with Mary Ann and the other residents of 28 Barbary Lane as they explored the beauty and eccentricities of San Francisco — and discovered themselves and a diverse community along the way.

“When I was writing, I simply tried to stay in the moment, knowing that it would be an interesting history of the city if I was faithful to that,” Maupin told the Alaska Airlines Blog in a recent phone interview.

This summer, the journey continues in the new “Armistead Maupin’s Tales of the City” series starting June 7 on Netflix. And Alaska Airlines guests have an additional opportunity to explore the author’s personal story through “The Untold Tales of Armistead Maupin,” a documentary by director Jennifer M. Kroot available for free inflight viewing through June and July.

The author and the filmmaker spoke with us at the end of May about the new series, the “Untold Tales” documentary — and shared some of the places they love in San Francisco.

These stories now span nine books and more than four decades. How do they resonate with readers today?

Armistead Maupin: They’re about young people who are looking for a home in a city, and looking for love. There was something called “Mona’s Law”: You can have a hot job, a hot apartment and a hot lover — but you can’t have all three at the same time. This was about the frustrations and joys of being young in a new place, and that is universal.

Jennifer Kroot: There are some new San Franciscans who confide to me that they moved here recently because someone lent them one of the early “Tales of the City” books and it meant something to them. Sometimes they’re gay people, sometimes they’re not. But they love the spirit of the book and they wanted to find that feeling.

The Netflix series brings back Laura Linney and Olympia Dukakis in roles they originated in the first miniseries that aired in 1994 on PBS — and Ellen Page joins the cast as Mary Ann’s grown daughter. What are some themes explored in the new series?

AM: This show particularly encourages the notion of intergenerational communication. There are young gay men who are talking to older gay men who remember the horrors of the AIDS epidemic, and there’s an older trans character talking to a young trans man about her experience and advising him on his. All of it’s about talking to each other. We need to do that more than ever.

My youngsters from the earlier miniseries are now the elders. The story is not just concerned with the young; it’s also concerned with their relationship with older people. And they’re all looking for love in one way or another. There are lots of surprises. I love that they reveal themselves at their own speed.

What are some of the important places in San Francisco for you and for the characters?

AM: I was always in love with Russian Hill. That’s why Barbary Lane was set there and it made sense to go back there in Jennifer’s documentary. We had the most serendipitous thing happen: A flock of wild parrots landed in the lane as we were there with the cameras. We didn’t stage that scene in the doc. They were just there. And that’s one of the wonders of San Francisco — that this kind of beauty can happen at any time.

“Tales of the City” was sort of a scrapbook of places I loved. Caffe Sport, which is still there, is a wonderful old kitschy, artifact-laden Italian tavern in North Beach and an experience I still enjoy. I had Mona and Mrs. Madrigal have dinner there one night before they went to see “Beach Blanket Babylon,” which is on the verge of closing.

JK: Russian Hill is an area where, in the ‘70s, there were society people but regular people could live there, too. We don’t really have that much anymore. San Francisco is really expensive everywhere now.

The stories show the characters’ discovery of their “logical family” — the circle of people who celebrate them for who they are. (“Logical Family” is also the title of Maupin’s recent memoir.) What advice do you have for people searching for their own logical family?

AM: That is really the theme of all of my work. I found great relief in discovering that I could form my own family and not have to deal with the strictures of the biological family. I came from a very conservative, rigid, ancestor-worshipping family from the South that only cared about the Civil War. And when I found that I could replace that with art and theater and interesting people, it was a delight. I tell people that if you need to change your life, do. It’s crazy to suffer at the hands of people who don’t accept you for who you are. That’s not just applicable to queer folks. It’s anybody who’s in an oppressive situation. If you realize that you’re the architect of your own life, you can make so much joy for yourself and for others by being true to who you are.

Jennifer, you have two documentaries showing on Alaska Airlines: “The Untold Tales of Armistead Maupin” and “To Be Takei.” What drew you to these stories?

JK: And I have a third documentary prior to those, “It Came From Kuchar,” about the Kuchar brothers, gay twins who were underground filmmakers. We call it the “Gay Geezer Trilogy” — and I have to give Armistead credit for coining that.

For these two, it was really fun to connect the dots. In George Takei’s case: How do you go from being imprisoned by the United States government at age 5 because you’re Japanese American and we’re at war with the Japanese, and then becoming a science fiction hero, and then coming out around age 68? With Armistead, how could you grow up with a tyrannical right-wing father and desperately want to please him — but inside you know that isn’t who you are. The bravery that takes is really hard. How do you become this open voice that has reached so many people about not only his homosexuality, but also his progressive spirit? I find it very inspiring.

Are there more stories about the “Tales of the City” characters coming in the future?

AM: I just signed a contract for a new “Tales”-themed novel. It’s not a continuation, but a deep dive into the middle of the story. I’m going to write about Mona Ramsey at the manor house she moved into at the end of “Babycakes.” A lot of people have complained that I left her there and never explained what that was like, and so I’ll be writing a book called “Mona of the Manor.”

Armistead, you and your husband recently moved to London. Was it hard to leave San Francisco?

AM: This is another city I’m enchanted with, and my husband is as well. Frankly, I wanted a new adventure late in life. If you’re lucky enough to be with somebody who wants to take on something new, it becomes a grand adventure.

At Alaska, our pride flies nonstop:

As longtime supporters of the LGBTQ+ community, we at Alaska remain committed to a building a more equitable society. We’re showing our #MostWestCoast love by continuing our partnerships with seven West Coast Pride events in 2019, and by offering a 10% discount on flights for a limited time to select California destinations. Look for Alaska employees marching in seven Pride parades this year. Learn more.