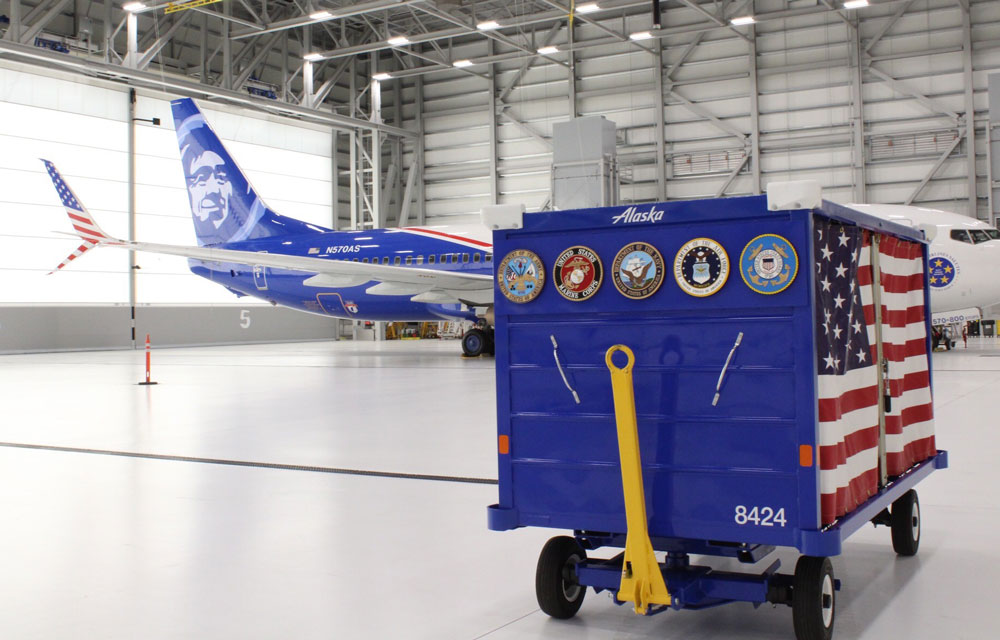 The 11th Fallen Soldier cart was delivered to Fairbanks International Airport in time to be of service before the Fourth of July. (Photo by Alessandra Jenkins)

On the airfield, one cart is reserved for heroes.

For the families of the fallen, the cart with American flag curtains and the insignia of the five branches of the military — the most visible part of Alaska Airlines’ Fallen Soldier Program — means their loved ones will be surrounded with respect and honor from those who accompany them on their final journey.

When a flag-draped coffin is carried off a plane and placed on the cart, the flight, maintenance and baggage crew members stand at attention on the tarmac — a powerful sight for a grieving family, says Julia Schmidtke, an Alaska flight attendant. Her 25-year-old son, Hunter Schmidtke, died in 2018 while serving at Fort Riley, Kansas: “It was amazing and meant so much to see all the working groups come together,” she says.

The experience was so important to Schmidtke that she became a program volunteer – and she was in Phoenix when the tenth Fallen Soldier cart was delivered to Sky Harbor International Airport in May. “It’s important to know what a Gold Star mom looks like,” she says.

Alaska employees delivered the 11th cart in the program to Fairbanks International Airport in time to be of service just before the Fourth of July. The carts are crafted by a team of Alaska’s Mechanical and Engineering department and are stationed at airports around the country. They’re available to honor members and veterans of all branches of the military.

Alaska’s Fallen Soldier Program employee training now includes this video shared by the Schmidtke family. In addition to photos from Hunter Schmidtke’s life, it shows the “Honoring Those Who Serve” plane that carried their son to Sea-Tac.

The interior of the Fairbanks cart is customized with a metal crafting of the Alaska state flag. The cart’s sections were flown from Seattle to Anchorage, where the cart was assembled and then escorted to Fairbanks by the Patriot Guard Riders and police.

In addition to Fairbanks and Phoenix, Alaska Airlines has dedicated carts in Anchorage, Seattle, Portland, San Diego, Los Angeles, Honolulu, Washington, D.C., Dallas and San Francisco. While the carts remain under Alaska’s care at each airport, they are available for any airline to use when transporting remains.

Brian Bowden, a line aircraft technician and Air Force veteran, helped start the Fallen Soldiers Program in 2011. In addition to creating the carts, the program established protocols for employees to follow when a service member’s body is traveling. Bowden notes that program volunteers include veterans and non-veterans. “We all wanted to take care of those who take care of us,” he says. “Freedom isn’t free. It comes at a price.”

“We are just trying to have soldiers’ backs and provide them with this service on their final journey home, so their loved ones know that people cared about what they did,” Bowden says. “You can never take away their pain, but you can show you care.”

As she volunteers with the program, Shmidtke often talks — and listens — to fallen soldiers’ families as they’re taking their loved ones home. “I think it provides some comfort to have someone sit with them who’s been through what they’re going through,” she says. And volunteering has helped her, as well: “It’s been a real healing experience for myself, and I’m so glad I opened myself up to it.”

The KING 5 News team in Seattle also recently produced this story on the Fallen Soldier Program:

The “Honoring Those Who Serve” livery

In 2016, Alaska created a plane livery called “Honoring Those Who Serve” dedicated to the men and women currently serving in the military as well as veterans and their families. A crest, to the right of the cargo door, represents our Fallen Soldier Program. The plane is used to transport fallen soldiers flying on Alaska Airlines, as well as for special flights, like our Honor Flights, to help veterans visit memorials in D.C.

Schmidtke’s son’s body was flown from Kansas to Seattle-Tacoma International Airport on one of the planes. “To have him brought home on the honor plane was a really big deal,” she says.

This year, Alaska launched its second plane in the livery, allowing the airline to serve new stations including Hawaii and Reagan National International, increasing the reach of the Fallen Solider Program.

Fallen Soldier Program through the years