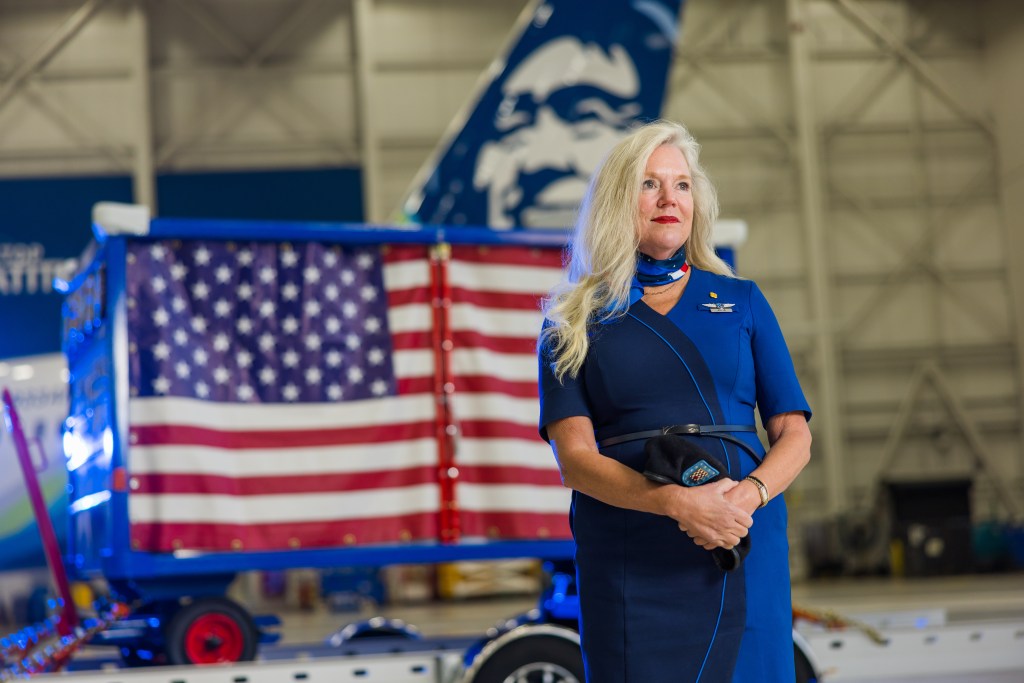 Alaska’s 12th fallen soldier cart, in honor of SPC Hunter Schmidtke, was made and delivered by our maintenance & engineering team. It will remain in our care but also be available for any airline at Kansas City International Airport transporting the remains of a fallen service members.

Twenty-five-year-old Hunter Schmidtke, died in 2018 while serving at Fort Riley, Kansas. The special cart was delivered to Kansas City International Airport on Tuesday where it will be used to transport the remains of fallen members of the military from any plane that needs it.

Designed and crafted by Alaska maintenance and engineering employees—some veterans, some not—the special cart is meant to honor heroes like Hunter, who gave everything for their country.

This is an incredible thing and means so much to Gold Star families like ours,” Julia said. “In a way it’s like he’s going back to serve his country.”

Julia and her family are part of the military’s Gold Star Program, which represents families and loved ones who have experienced a loss of an immediate family member who died as the result of military service.

She proudly wears her Gold Star pin on her uniform when she flies. “It’s a small way I keep his memory alive, and it reminds me that he’s always with me and close to my heart,” she says. Julia has been a flight attendant with us for nine years.

In 2018, Hunter’s remains were brought home on our Honoring Those Who Serve Aircraft, it was the first time a fallen soldier who was related to a family member at Alaska Airlines was flown by the special aircraft. His brother, Trevor, was so moved by the respect Alaska paid to his brother and family, he applied to be a flight attendant and currently flies with us today.

“It was a powerful and incredibly moving experience to see everyone come together for Hunter and our family,” Julia said.

At Alaska, there is one cart reserved for heroes.

For over a decade, Alaska has had a company-wide program designed to ensure military families like the Schmidtke’s are treated with the utmost respect.

Each unique fallen soldier cart is crafted by our Maintenance & Engineering team and is stationed at airports around the country. They’re available to honor members and veterans of all branches of the military.

Specifically designed and dedicated to fallen service members, each cart is adorned with American flag curtains and the insignia of the five branches of the military to ensure the fallen will be surrounded with respect and honor by those who accompany them on their final journey.

This year’s cart was assembled in Seattle and then driven to Kansas City by Alaska maintenance employees under escort by Patriot Guard Riders, who volunteer to accompany the cart throughout its entire journey. It’s also the first cart to be delivered since the beginning of the COVID-19 pandemic.

Kevin Kruse, a line aircraft technician trainer and one of the creators of the Fallen Soldier Program notes Alaska also established protocols for airline employees to follow when a service member’s body is traveling, which has set the precedent for the industry.

This is our way to have soldiers’ backs and provide them with the service they deserve on their final journey home, so that families like Julia’s know that people cared about what they did,” Kruse says. “You can never take away their pain, but you can always show you care.”

In addition to Kansas City, we will deliver our 13th cart to San Jose International Airport later this year. Alaska has dedicated carts in Fairbanks, Phoenix, Anchorage, Seattle, Portland, San Diego, Los Angeles, Honolulu, Washington, D.C., Dallas and San Francisco. While the carts remain under Alaska’s care at each airport, they are available for any airline to use when transporting remains of fallen service members.