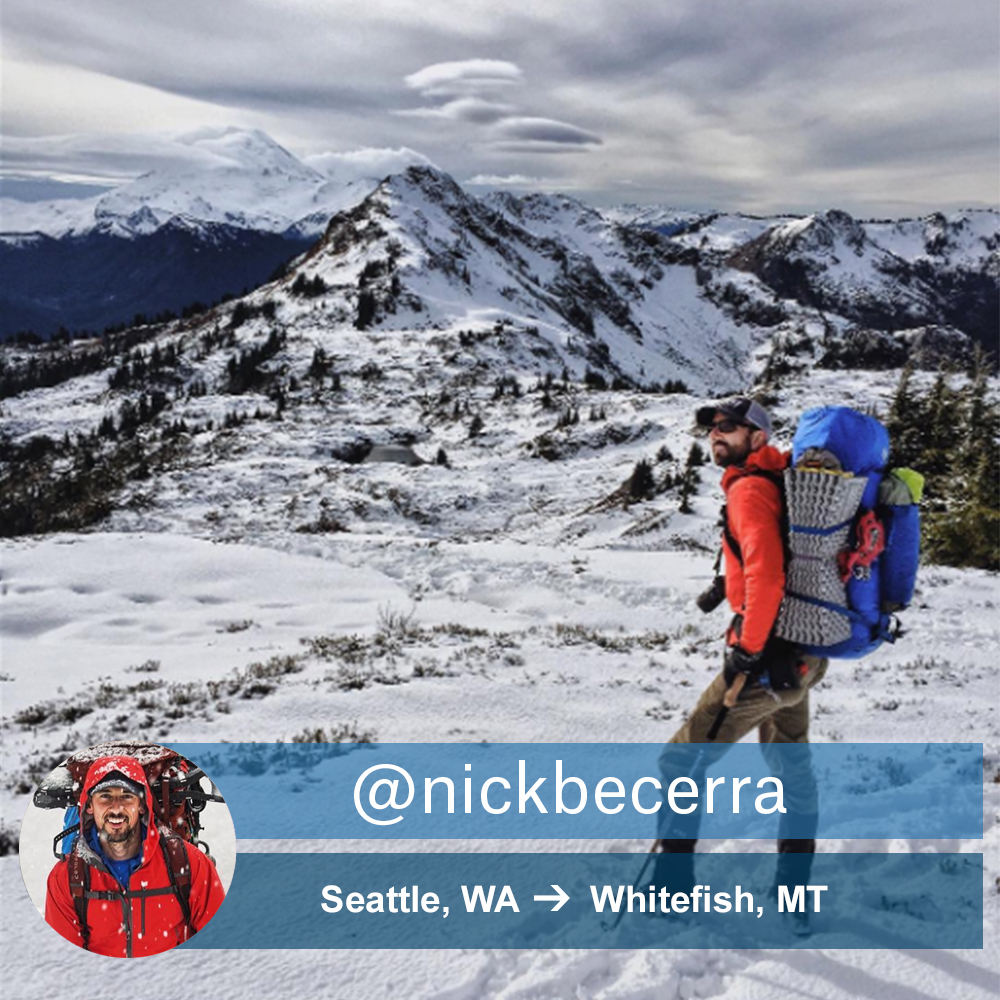 Residing in Seattle, Washington, Nick Becerra is a photographer and family man with a taste for adventure. Capturing images from the mountain tops is no easy job, but Nick knows just how to bring those beautiful views to the small screen. He just returned from an Instagram takeover in Whitefish, Montana as part of Alaska’s Weekend Wanderer series. For more Weekend Wanderer posts, be sure to follow Alaska Airlines on Instagram.

How much can you pack in during a weekend in a brand new place? That’s just what Alaska Airlines asked my family and I to find out as we traveled from Seattle to Whitefish, Montana. We jumped at the opportunity and immediately began researching the incredible options in the greater Whitefish area … a place we soon found out is an outdoor recreation paradise.

We packed our skis, took the kids (ages 12 and 6) out of school for a couple of days (they were thrilled!), and booked a cozy cabin 10 minutes outside of Glacier National Park. Soon enough we walked the tarmac and boarded a small Alaska plane for the short flight to Kalispell, which felt a world away when we landed on Thursday afternoon.

Our first impression was that Montana people are the nicest around. Everyone has a story to share, is incredibly patient and is happy to help you along the way. MacKenzie River Pizza in Whitefish was our first stop – full of delicious food and incredible kid-friendly service. Most importantly, we discovered our new favorite beer, which we then ordered everywhere else — the Cold Smoke Scotch Ale by Montana’s KettleHouse Brewing Co.

On the drive to our cabin (we booked with Reclusive Moose Cabins), we impulse-booked a 3-hour snowmobile tour for the four of us on Saturday with Swan Mountain Snowmobiling. They were happy to fit us in and were also super nice!

Friday found us up early and heading towards Whitefish Mountain Resort to ski Big Mountain. We spent a full day on the slopes. My daughter Zoe skied her first blue run in the morning, and Ethan, Mindy and I took turns finding powder stashes in Hellroaring Basin. On top of incredible terrain and service, we were stunned by the views below of Whitefish and the huge frozen lake.

Saturday we had a big day that started with snowmobiling to the top of Desert Mountain (my first time on a snowmobile!). After a brief safety lesson, Mindy and I split the kids up on two double snowmobiles for the 45-minute drive up the trail. I quickly found out the limit of our sled and my son Ethan and I found ourselves sideways off the trail with a half-buried sled. Whoops! We dug it out pushed it back and were back on the trail in no time. Phew! Here’s a pro tip: don’t try to showboat for your son when you have no idea what you’re doing. Also, have a healthy supply of foot and hand warmers for the minis. And hot cocoa. It’s clutch.

We met the sun at the top, played around for a bit and high-tailed it back to the car. I wish I could have nabbed more shots on this drive, but without a GoPro, it’s probably more important to focus on driving.

We spent a clear Saturday afternoon in Glacier National Park along the shores of Lake McDonald. Pictures will never do this place justice. The rugged peaks lining the end of the crystal clear lake are like no others we’ve seen. We found a perfect beach to ourselves, broke out the snowshoes we rented from the nice folks at Sportsman & Ski Haus and played for three hours as we watched the golden light turn into a cool, brilliant sunset that set the mountains aflame.

Saturday night, we had dinner at Oso’s Smokin’ BBQ – a Mexican barbeque joint at the historic Tamarack Lodge. Again, it felt like being in a small community and we spent the evening chatting by the fire with the owner, who shared his story, inspirations and his passion for ice fishing, despite being a California guy.

Sunday morning, I snuck out early on my own to drive back to Lake McDonald to catch sunrise. The clouds were socked in at the lake, but I had it all to myself — a serene winter scene with 4-degree temperatures, light snow, misty water and fog, and no sun to be found. I took it all in on the frozen dock on the shores until my hands couldn’t take it anymore. An unforgettable experience!

We spent the rest of Sunday exploring the town of Whitefish, eating lunch at Buffalo Cafe, grabbing coffee at Montana Coffee Traders, and taking our warm drinks to walk along the frozen Whitefish Lake. It was full of people ice fishing, which we’d never seen in person before. Seriously, this area is an outdoor recreational paradise.