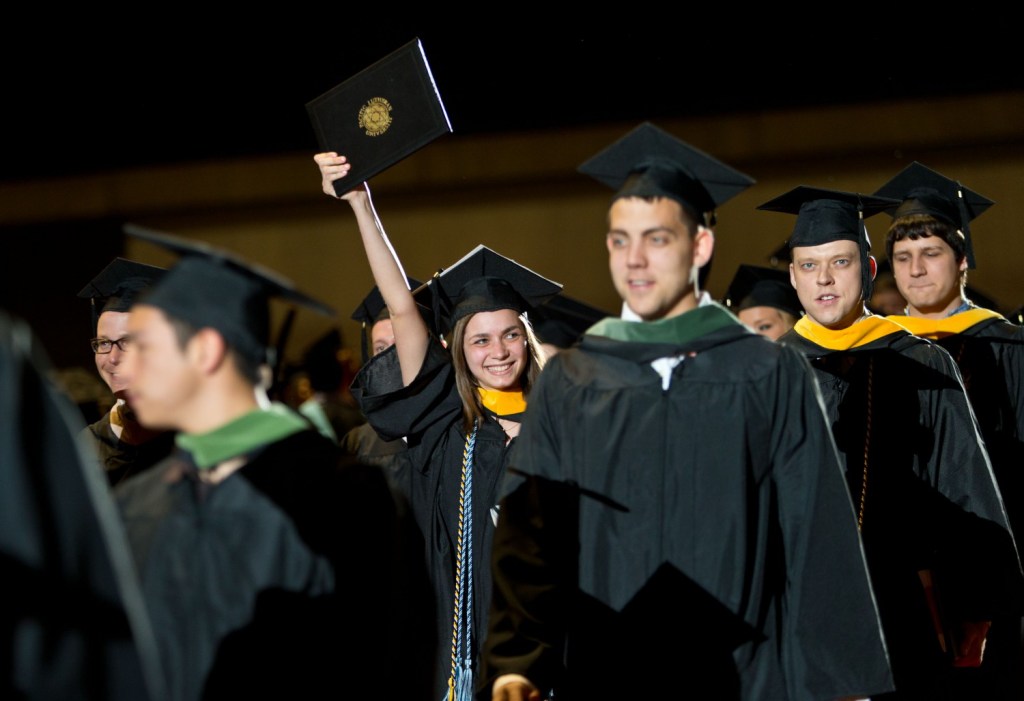 This speech was originally given by Alaska Airlines CEO Brad Tilden this spring at the University of Alaska Southeast commencement in Juneau, Alaska.

As seniors from my own alma mater Pacific Lutheran University prepare to line up for graduation today (Go Lutes!), I wanted to share with all of this year’s graduates three lessons I’ve learned from others through my own travels in life.

1. Never give up on your dreams

My guess is that most of you—maybe all of you—have some dream that you’re either pursuing or would like to pursue. And if you don’t, maybe you’re still looking for that one thing you’re meant to do.

Abraham Lincoln once observed that, “You can lose everything in life, but not your dreams.” My personal experience is that he’s right. Dreams inspire us and sustain us. Sometimes they haunt us. Dreams are our way of reminding ourselves of what we care most about. So if you know what you’re passionate about, either pursue it directly or figure out how to keep that dream alive while you’re doing other things – maybe paying the bills. Figure out how to stay in the game.

My dream started when I was 4 or 5 years old. I saw a Boeing 727 up-close on the ramp in Huntsville, Alabama. It was sleek, gleaming, and to a 5 year old, very, very large. Knowing it was the same as those awe-inspiring jets I’d seen streak across the sky really captured my imagination. That feeling stuck with me. I didn’t come from a long line of pilots or anything like that. But a spark had been ignited.

My passion for flight persisted into high school. I went to Highline High School which is directly west of SeaTac airport. If you’ve flown into SeaTac and come in from the North, it’s off to the right as you land. Some of my friends had girlfriends that they used to take up to this park where the third runway is now to “watch airplanes.” Well I went there too, but I didn’t have a girlfriend, so I actually watched the airplanes! I used to wonder where they were coming from, where they were going, how good of a landing the pilot would make, and whether I could ever fly an airplane like that.

When I did finally muster the courage to take a girl to the park, things didn’t work out so well. I was going to try to kiss per but I was feeling a little nervous. My blood pressure escalated and I got a nose-bleed. And there was nothing in the car to stop the blood. So I stuck with airplane-watching.

Like many dreams in their early stages, I had no idea where this was heading. I had no idea how I could pursue my fascination with flight. But I got lucky and ended up with a great job in the summers of my college years. My family didn’t have a ton of money, but it started to seem like I might be able to not only pay for college, but also have a little money left over. So I went down to the Renton airport one day, and took an introductory flight lesson. I totally loved flying, and I earned my private pilot license the following summer.

I would daydream about being a professional pilot, but that just seemed too impossible. That would have been like winning the lottery. It just wouldn’t happen for me. I needed to make sure I ended up with a job after college. So I went to Pacific Lutheran University and studied accounting and finance. Then I took the CPA exam and went to work for an accounting firm. And actually, I really enjoyed accounting.

Then, after working for Price Waterhouse for eight years, including a couple of years in Australia, the phone rang. It was Alaska Airlines. They wanted to know if I’d come interview for a job deep in the bowels of the accounting department. I was ecstatic. I did not sleep the night before the interview. I got the job and I’ve had a number of great jobs at Alaska over the years. And I get to work around airplanes, and the finest team of people in the airline industry, every day.

And it’s funny how things sometimes work out. The accident of my life is that being a bean-counter was the best preparation I could have had for working in the airline industry over the last couple of decades. Ten years ago, almost every airline had more debt than assets, and more expenses than revenue. There was a time in this country when 70 percent of the airplane seats out there were flown by bankrupt airlines. Of the airlines that existed at the time of deregulation, all but one ultimately filed for bankruptcy. That’s why Warren Buffett famously said that if a good capitalist had known how things were going to work out (for investors) when the Wright Brothers first took off at Kitty Hawk, he would have shot them down! By the way, the airline that didn’t file for bankruptcy is Alaska.

Many, many people helped keep Alaska out of bankruptcy, but with my financial background I was in a unique position to help. So … the first lesson is this: Never give up on your dreams.

Believe in the things that inspire you, and stay in the game even when you have to do other things. Eventually you will get there.

2. Face reality with honesty and courage

The second lesson I’d like to share is a little harder to articulate but it’s something I feel strongly about. Whether we’re talking about ourselves, our family, or our company, I think that virtually all growth – and improvement – and development – almost everything positive in life –– comes from being able to look at our situation and be brutally honest with ourselves about exactly what’s going on.

If a company considers itself great in a certain area already, it can’t get better. If my ego requires me to say I’m a great runner or a great pilot, a great father or great husband, I can’t improve. If I keep telling myself and others that my area at work has things totally nailed, where does the growth come from? And if you don’t have growth, what do you have?

Steve Ballmer, the long-time CEO of Microsoft once said that the toughest thing for a leader to do is to be both realistic and optimistic. The optimistic side is very important also. One of the most common traits of leaders I admire is that they fundamentally believe that the future is going to be better than the present.

But this has to be balanced with a realistic assessment of where you are today. That realistic assessment is what creates the baseline for improvement. If I look at Alaska Airlines over the last 15 years, it’s clear to me how important this has been in our own improvements. How we needed to acknowledge our shortcomings and become safer after the tragic accident with flight 261. How we needed to get our costs down to stay out of bankruptcy in the middle part of the last decade. How we needed to get our operation to be on-time after we’d made a number of painful changes to the company. Or even today – how we need to provide the best service we possibly can to keep the company independent. All of those improvements, started – and are starting – with a brutally honest and unflattering assessment of ourselves. An assessment that could be summed up in words like, “we stink at this.” Or, “we’re not going to make it we don’t fix this.” Or something less polite. The more you think this way, the more you get used to it, and the more you enjoy the growth that follows it.

I think some of this happens with age, but I will you tell you that one of the things I look for most in people that might come to work at Alaska is that sense of humility – that sense of things yet to be done. So that’s the second lesson: face reality with honesty, with courage, and with optimism. And when you see that you fall a bit short of where you want to be – which we all do – be gentle with yourself.

3. Take care of yourselves

The last lesson that I’d like to share is going to make me sound like the father that I am. But it’s true—I am a father and that’s a tough habit to break. And I’ve given this advice to my own kids many times, and they haven’t really heeded it, so I must need to keep giving it, right? My last piece of advice is this — take care of yourselves. When I see a lot of young people these days, they look tired – and worn out. Life is so busy. People are working multiple jobs, going to school, taking care of families, and then with social media you can never be online enough, or hang out with your friends enough, or what have you. I see people burning candles at both, or maybe all three, ends. And maybe not paying enough attention to getting enough sleep, and eating reasonably well, and getting outside once in a while.

I mentioned Warren Buffet earlier. He uses this analogy: imagine that you are given a free car when you turn 16. It can be any car you want. The only catch is you have to make it last for your entire lifetime.

If you knew that car had to last your whole life – or you would be walking – think how careful you’d be. You’d not only read the owner’s manual but you might memorize it. You’d actually get the car serviced regularly, and you’d immediately fix any little mechanical problem. You’d take great care of it, because you would want to make sure that it would go the distance.

Well, that is the position we are all in with our minds and bodies. We only get one of each. They have to last a lifetime.

I will be honest – I like my red wine – and my Icy Bay IPA – as much as the next guy. Maybe more. I will probably be enjoying one of the two later tonight, as I hope many of you will as you celebrate this glorious day. But Buffett’s advice does make you think. We’re all in this for the long haul. Are we doing the things we need to do now, so that we’ll have good lives down the road?

What I see with some folks is simply the need to say “no” once in a while to that last activity that realistically cannot be fit in. They’d be so much better off to stay home, read a book, have some quiet time, and go to bed at a reasonable hour.

I know that to the younger folks, this sounds like a typical old person talking to you. But it really applies to all of us at different points in our lives. If we take good care of ourselves, we’ll be able to better handle what life throws at us – the good and the bad – and better able to make the most of our opportunities to be happy and successful.

I want to congratulate you once again for your incredible achievements and I wish you each the very, very best. I encourage you to dream big and never lose sight of your dreams, to approach whatever it is that you’re working on realistically, with courage and optimism, and finally – to take good care of yourselves.

If you can manage all that, then as we pilots say, the sky’s the limit.