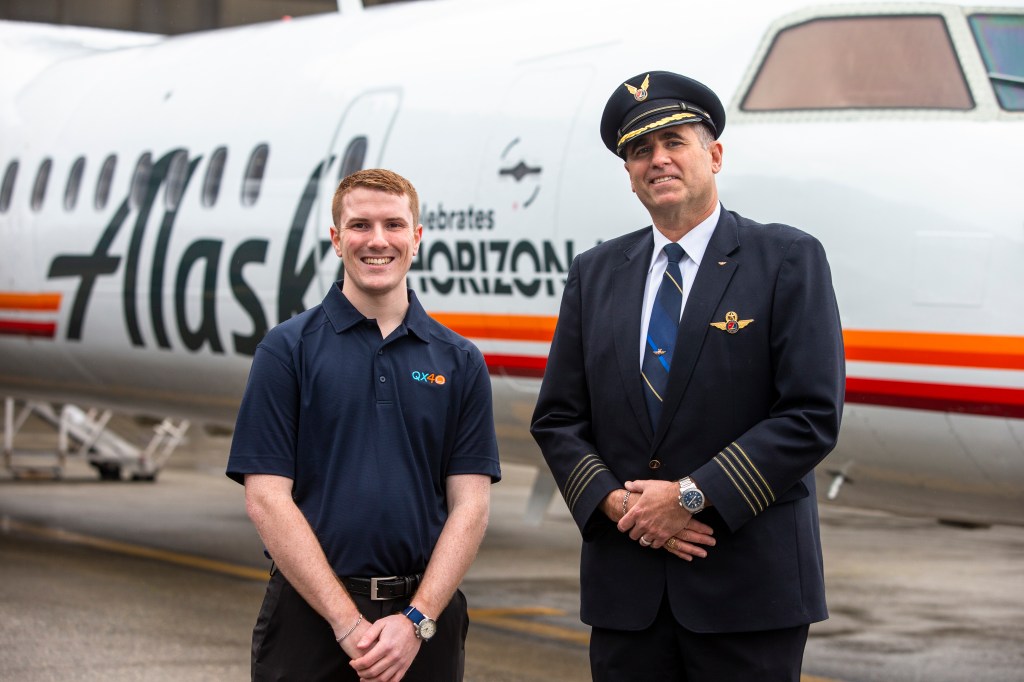 Aspiring pilots and the mentors who take them under their wing

Austen Pyle was 13 when he knew he wanted to fly — it was his first brush with the sky in a glider. Today, less than 10 years after that first flight, he’s starting his pilot training with Horizon Air, Alaska’s regional airline in the Pacific Northwest. Within a few months, he’ll be a first officer – following in his mentor’s flight path.

Like many pilots, it took just one flight to inspire a career. Lawrence Pavlinovic, then a Horizon Air captain and now an Alaska captain, was the glider flight instructor that auspicious day. He saw Pyle’s passion for flight immediately and took him under his wing – inviting him to Aviation Day, an annual event hosted by Alaska and Horizon to inspire careers in aviation.

“Lawrence really pushed me to explore aviation as an option,” says Pyle. “He opened my eyes, and I’m so glad he did.”

Now’s the best time to become a pilot

The need for the next generation of pilots is greater than ever. Alaska and Horizon expect to hire more than 900 pilots by the end of 2022 to replace thousands of pilots who retired during the pandemic or are approaching the mandatory retirement age of 65. Across the industry, mainline airlines are hiring about 10,000 pilots this year alone.

But in between the moment a love of flying is sparked and a career, aspiring pilots like Pyle face a journey that requires a daunting investment of time and money. On average, it can cost around $90,000 for education, flight training and certifications, and pilots must log hundreds of flying hours before they can fly for commercial airlines. However, the opportunities for financial and other support while navigating this journey are growing.

Alaska has launched several pilot-development programs – including most recently True North, a partnership with two historically black colleges and universities (HBCUs), and Ascend Pilot Academy, a partnership with Hillsboro Aero Academy in Oregon – to encourage aspiring pilots from diverse backgrounds to follow their dream.

Want to fly? Here are some tips and resources to get you off the ground:

Flight schools and many flying clubs offer an hour with a flight instructor who includes an introduction to ground school as well as time at the controls in the air. Pilots say this is the best way to determine if a curiosity about flying will transform into a passion and commitment to do the work.

“Do one flight. That’s all it will take for you to decide if you want to become a pilot or not,” says Pyle.

Alaska’s annual Aviation Day events in Seattle and Portland also provide an opportunity for young people to explore careers across the industry. Seattle’s event was May 7, but there’s still time to attend the event in Portland, coming up Saturday, May 21. Learn more about registering.

Pyle started out at the Evergreen Soaring Club and worked toward his pilot’s license while still in high school. “I actually got my private pilot’s license before my driver’s license,” he said.

When he started Central Washington University’s aviation program, Pyle interviewed right away for the Horizon Air Pilot Development Program, which partners with universities while providing a stipend, mentorship and a pathway to a future job at Horizon.

“That was really special for me as a freshman in college to know that I had an airline job waiting for me when I was ready,” said Pyle.

And Alaska’s newest pilot-development programs are designed to recruit students with diverse backgrounds, part of our commitment to increase the diversity of our workforce at all levels by 2025.

The True North pilot-development program was launched in fall 2021 in partnership with Delaware State University and University of Maryland-Eastern Shore, two historically black colleges and universities (HBCUs). True North’s goal is to recruit and support BIPOC pilots on their journeys, and students receive guaranteed first officer positions at Horizon upon graduation, along with a confirmed path to Alaska.

Ascend Pilot Academy launched in March in partnership with Hillsboro Aero Academy in Oregon to provide resources and a career path for aspiring pilots, including those who don’t yet have flight experience. Once accepted, cadets receive a stipend and financial assistance for training, as well as a confirmed job with Horizon once qualified. “Aviation is for everyone,” says Carlos Zendejas, vice president of flight operations for Horizon Air. “Our programs help navigate the how-to of becoming a pilot, and we know that finances are a barrier, so our programs have stipends to help with that as well.”

We need to find the young pilots and we’ve got to grow them. That’s where True North came from.” – Captain Ron Limes, one of the founders of True North and Alaska’s director base chief pilot in Seattle.

Seek out support through pilot associations and flying clubs

Aerospace associations and flying clubs offer a wealth of resources – from scholarships to assistance in sorting through education options, to job opportunities. For example, Alaska Airlines Captain JP Wilson found a job at Horizon Air through a career fair sponsored by the Organization of Black Aerospace Professionals.

Limes says associations provide vital guidance from mentors who have already navigated the journey to becoming a pilot, which is especially valuable for diverse students who are entering a field long dominated by white male pilots.

“You can find a group where somebody has already broken the barrier for you. I’m so thankful for the generations ahead of me who made the way smoother for me,” says Limes.

A few of the associations and clubs with Alaska and Horizon members:

Find a mentor to help you stay the course

As a young man, Pavlinovic chased his aviation dreams for years, but kept running into roadblocks – from his parents, who initially pushed him to be a doctor or lawyer instead of a pilot, to the Air Force recruiter who told him he couldn’t fly because he wore glasses (not true). He credits a naval aviator who was a flight instructor in the Civil Air Patrol for encouraging him to not give up. It took many years, along with money from the veterans’ benefits he earned through 21 years of service in the Marines and Army, to achieve his dream of becoming a commercial pilot.

Now when he meets young people like Pyle who have a passion for flying, he’s eager to help them on their way. “Because of my experience in the military and the civilian world, which is where I did all my flying, I can tailor my mentorship to a young man or woman and talk through the different ways they can pursue this,” says Pavlinovic.

Across Alaska and Horizon, pilots take mentorship to heart, and veteran pilots are matched with students in all our associated pilot-development programs.

Pyle has already found ways to mentor up-and-coming pilots. While still in high school, he put together a presentation on aviation careers for a class of fifth graders – complete with metal wings donated from Alaska and Horizon. And as a flight instructor, he would tell his students: “If you’re going to do this, do it 100 percent until you are done and nothing less.”

Now that he’s achieved one goal, Pyle has his sights set on another: “I’ve told Lawrence, ‘On your retirement flight, I want to be your first officer.’”