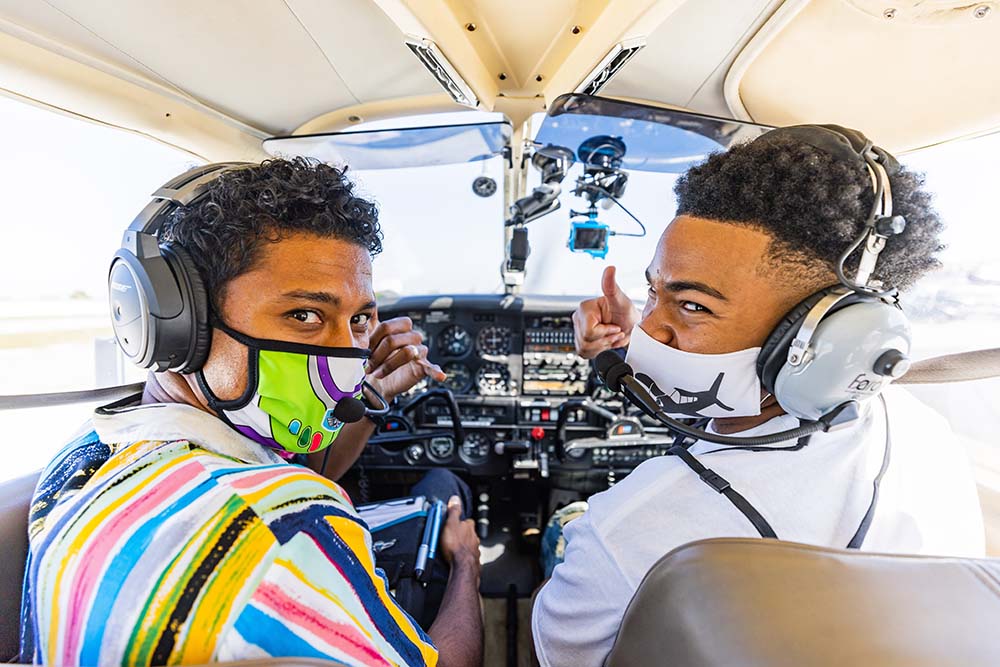 Since he was a kid eating ice cream and pizza from the back of his parents’ car, watching planes fly in and out of LAX, Ronnell Norman was fascinated by aviation and the power of flying.

Growing up near Compton, California, when gang violence and crime-riddled the streets, Norman kept his sights on the skies. At 19 years old, he became the first student to enroll at Compton Airport’s flight school. Today, he’s a first officer with Alaska Airlines and CEO of that flight school, now known as Fly Compton Aero Club.

“I love flying. It’s the ultimate freedom. It puts your mind to the test every time you depart. It takes all of your senses to operate a safe flight and it is something I have wanted to do since I was a child,” said Norman.

Norman hopes to continue creating a safe haven for neighborhood youth in Compton.

“Still today, kids as young as six are becoming involved in gangs. It’s important for kids to see there is a life beyond the inner city,” he said. “Helping kids is very important to me because it was instilled in me since I was a child. My parents gave people and kids in our community opportunities to have impactful futures and I want to do the same.”

Fly Compton Aero Club invites anyone interested in aviation to learn, engage and share their love of flying with other students and aviation professionals. Currently, the youth club has about 30 students, ages ranging from 8 to 18.

Even now, people assume Norman is a flight attendant because of the color of his skin. However, he says it doesn’t come from just white people. Black people also assume this about him because generally, people don’t see many Black pilots. He is optimistic schools like Fly Compton will help break such barriers and close the gap.

If you don’t see something, you just don’t expect it to be that way. That’s everybody. That’s implicit bias. But it’s getting better, in my personal belief,” he said. “The opportunities are here — we’re teaching kids, don’t give up. We’ll get you to where you want to go and being a Black pilot will become a normal thing. You just have to keep pushing.”

Fly Compton Student Alicia, 17, began flying in 2018 shortly after her landlord introduced her to Norman. She was inspired to take flight when her 9th-grade class took a field trip to LAX and heard a female pilot speak about flying.

She hopes to attend San Jose State, become a professional pilot someday, and give back like Norman and other flight instructors.

“I know the industry is predominately white men and as a Black person of color, I’m excited to influence my community and hopefully support other young girls like me who want to be pilots because I know how hard it is to take that first step,” she said.

Parents of students at Fly Compton also recognize the legacy Norman and others are building.

This program right here is actually taking young kids and building them up and building their confidence to be pilots,” said Lamar Brumfield, a  parent of two boys who are interested in learning about flying. “The instructors are inspiring them and showing them that they can do this. These kids will be the new future and inspire my sons and so on.”