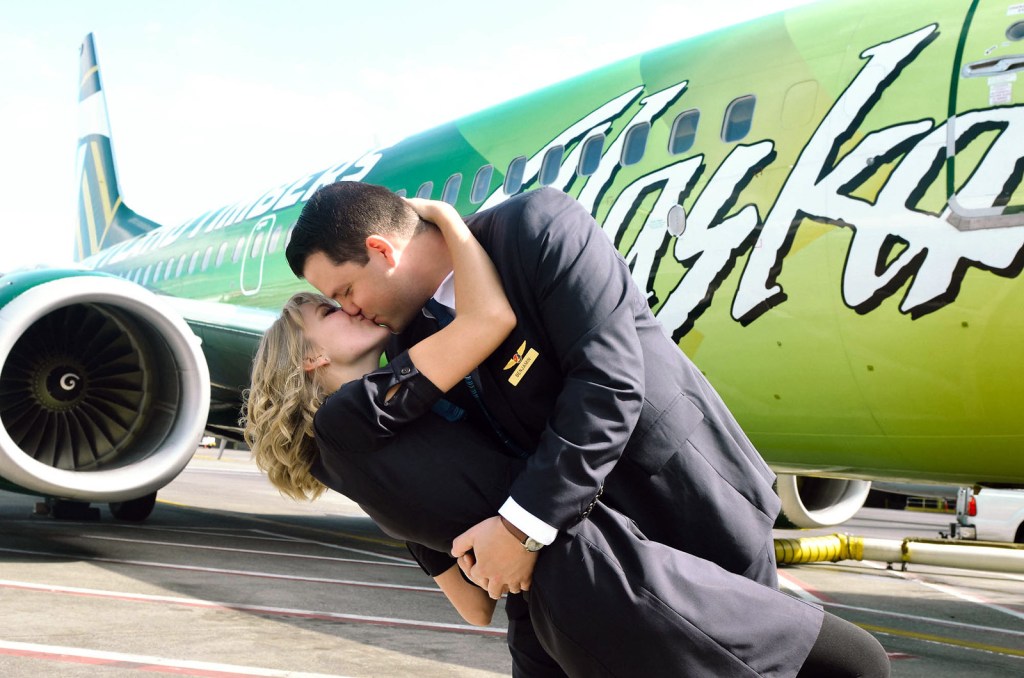 It sounds like a Hallmark movie: Two people “meet cute” in Alaska Airlines flight attendant training, fall head over heels for each other, covertly find ways to spend time together, are separated by their jobs for a time and then come back together and become engaged exactly one year after they met.

Oh, and one other thing: Both sets of their parents met working at Alaska Airlines and Horizon Air, and still work there today.

In a nod to Alaska Airlines for bringing them together and their deep roots with the company, they recently had all of their engagement photos taken on and around the Portland Timbers-themed airplane and Portland International Airport. The photos were taken by Victoria Fitch, also a Portland-based flight attendant. Their wedding date is set for Sept. 6, 2018.

Both were hired in May 2016. They first met at the meet-and-greet for their flight attendant training class the night before classes started. And according to both of them, it was love at first sight – or at least really strong like.

Benjamin said he noticed Carline right away. She was standing next to her roommate whom Benjamin knew from his hiring group, allowing him to make a smooth introduction. Even though their conversation was brief, Benjamin said that Carline remained on his mind.

For Carline, it was a similarly electric moment.

“Seeing him for the first time was like a movie scene,” she said. “I spotted him across the room and he turned in slow motion and smiled at me. My heart dropped to my stomach and I just knew that he was going to be an important part of my life.”

Like any popcorn-worthy flick, there was a misunderstanding early in their courtship that had to be resolved before the romance could move forward. Carline was wearing an heirloom ring on her right hand, which Benjamin thought meant that she was taken.

The pair were talking to classmate Hawley Cappo, who asked both of them if they were single. They both said “Yes!”

During class, they often caught each other stealing glances.Benjamin would offer rides to the grocery store and Carline always seemed to need something.

“We would walk into Safeway and ‘forget’ what we needed and go drive around listening to music and end up at dinner afterwards,” Benjamin said.

What they call their first “date-no-date” was at putt-putt golf not far from Sea-Tac Airport – when Benjamin was in charge of inviting classmates, and again “forgot” so he could be alone with Carline.

After three weeks and a hard day of training flights, Benjamin confessed his feelings for Carline and she reciprocated and agreed to be his girlfriend.

After graduation, they made their relationship public – but graduation also meant six months of being based in separate cities. Benjamin was assigned to Anchorage and Carline to Los Angeles. Before long, and after many flights traveling to spend time together, both were able to transfer to Portland.

The temporary time apart did not get in the way of them forming a deep bond. On their one-year anniversary, Benjamin got down on one knee on a beach in Gig Harbor, Washington (his hometown) and asked Carline to marry him. Of course, she said yes.

When you look at the couple’s family ties to Alaska Airlines, their match seemed beyond fateful.

Benjamin’s mother and step-father also met through Alaska Airlines – Jeanette Hill is a flight attendant and David Hill is a captain.

Both Carline and Benjamin’s mothers had encouraged them to become flight attendants, so they owe it to them that they met. They both had a chance to fly with their mothers on their first trips.

“We joke that our whole lives are a compilation of ‘thanks Alaska!’ moments,” Carline said. “Not only did  our families grow from the airline, we never would have found each other without it. Relationships can be difficult in the airline industry, but I am very thankful that I have someone who truly understands the demands of the job. And our families are always flexible with celebrating holidays on different days – we’ve been doing it our whole lives.”