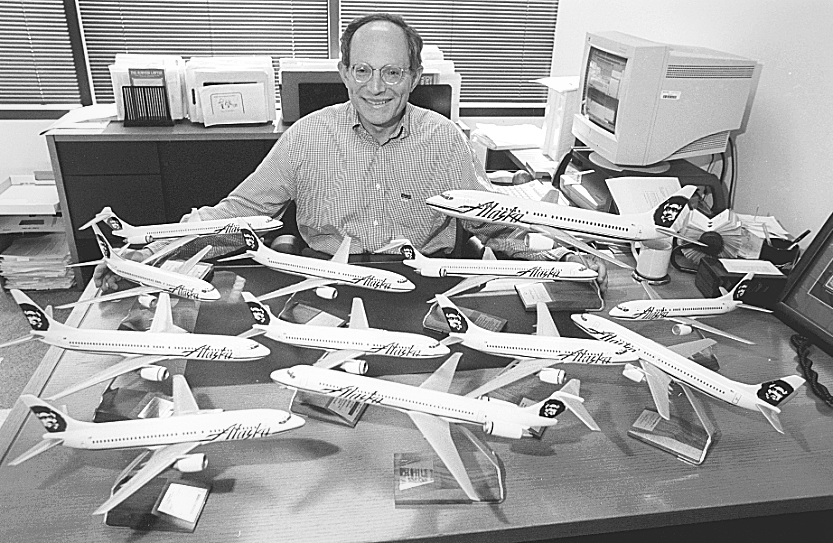 Irv Bertram (pictured above) has handled the paperwork for Alaska’s aircraft purchases for the past four decades.

In the 50 years Alaska Airlines has been buying and flying Boeing planes, acquiring aircraft has never been easier.

First, the airline has the cash to buy jets fresh off the assembly line in Renton. Second, Alaska is close to Boeing – both in proximity and in our longtime business relationship. The Seattle Delivery Center at Boeing Field is less than 10 miles north of Alaska’s Corporate Headquarters.

It wasn’t always this simple.

Just ask Irv Bertram. For the past 40 years, Bertram has handled the paperwork for almost every purchase, sale or lease of aircraft operated by Alaska.

In the lean times of the 1970s, ’80s and ’90s, Alaska scoured the world for affordable used aircraft – then sent Bertram to seal the deal.

He always came home with airplanes, and picked up a few stories along the way.

The old way of doing things

Bertram, has traveled to places such as Singapore, Malaysia, Iceland and England to get planes for Alaska.

When Bertram joined Alaska in 1976, the airline operated 10 aircraft, plus two small Twin Otters. Bertram summed up the plight: “We couldn’t afford anything.”

In the old days, he traveled the world to get good deals on used aircraft.

The turning point was the Deregulation Act of 1978.

“We finally got to fly somewhere other than Alaska,” he said.

As the airline grew, Alaska needed planes, but couldn’t always afford new ones.

In one memorable journey, Bertram traveled to London to meet with an aircraft “broker” fronting for a Nigerian airline.

“We thought he owned the planes,” Bertram said. “But we didn’t know that he didn’t have any money – he needed our money to buy the planes.”

Alaska ended up dealing directly with the representatives from Nigeria.

“While we were afraid of graft, we managed to avoid it,” Bertram said.

Another time, in the early 1980s, Bertram traveled to Gustavus, Alaska to take delivery of a new Boeing 737-200C – he flew up there on the plane he was buying. Why go to Alaska? By closing the purchase there, it qualified for Investment Tax Credit under Alaska tax law. The airline loaded some freight, then flew the plane back home to Seattle, thus “placing it in service in Alaska” to qualify for the tax credit.

On a recent morning, Bertram stopped by the Boeing delivery center during his commute – it’s less than a mile out of his way. Completing the transaction via virtual meeting could be an option, but that doesn’t make sense for a hometown customer like Alaska.

“For us, it’s so convenient, it doesn’t make sense to do it digitally,” Bertram said.

Irv Bertram can now buy a plane on his way to work.

The key players from Boeing and Alaska gathered in a second story conference room that overlooks the ramp – the Alaska Native on the tail of the new plane appeared to be peeking in the window.

To complete the final paperwork, the group has the procedure down to a science.

The closing process used to take three to five hours with printed paperwork that filled three to five boxes. It now takes less than an hour – electronic documents let everyone review the material before they arrive for the meeting. Bertram double checks some of the documents on his iPad.

“We used to sit around with boxes for days” said Debbie Kemper, who has worked in Boeing records for 31 years.

Now, Ward does that review electronically before the meeting. Bertram asks Summers or Leiper if he technically accepts the aircraft for purchase, then asks Ward to verify that the records are acceptable for purchase. Following approvals, Alaska wires the funds to Boeing.

Lanine Lange, regional director of contracts for Boeing, confirms receipt of the funds and then dials Boeing’s FAA representative in Oklahoma City to register the sale.

After registration of the aircraft with the FAA, the plane’s title is transferred from Boeing to Alaska. With a pen, Bertram signs his name on the final paperwork.

Summers looked at his watch.

The ceremonial keys were handed over and people politely applauded.

Everyone broke for lunch.

“Irv and I have been doing this for two decades,” Summers said.

He listed off the things that make Bertram so good at his job: “Attention to detail. Experience. Industry knowledge. Sensible.”

Outside, Bertram did one final walkthrough of the aircraft.

Good to the last dollar

In Irv Bertram’s office at Alaska Corporate Headquarters, a framed dollar bill hangs on the wall, along with a $1 receipt from Boeing. It was a gift from former Boeing director of contracts Mike Anderson. Back in 2001, Bertram was closing on a 737-700. Alaska wired the millions of dollars to Boeing, but when comparing final numbers, Boeing realized that Alaska’s payment was somehow a dollar short. There was no simple method to wire $1, but the deal couldn’t be completed with the discrepancy. “I just reached into my wallet and pulled out a dollar,” Bertram said. “I said, ‘Here, let’s close.’”

Alaska and Boeing photo timeline: Flying together for 50 years

For 50 years, Alaska Airlines has been buying planes from its neighbors up the street at Boeing. From its first 727-100 to next year’s arrival of the 737-MAX, click through the photos below for a timeline of the Alaska-Boeing relationship through the years.