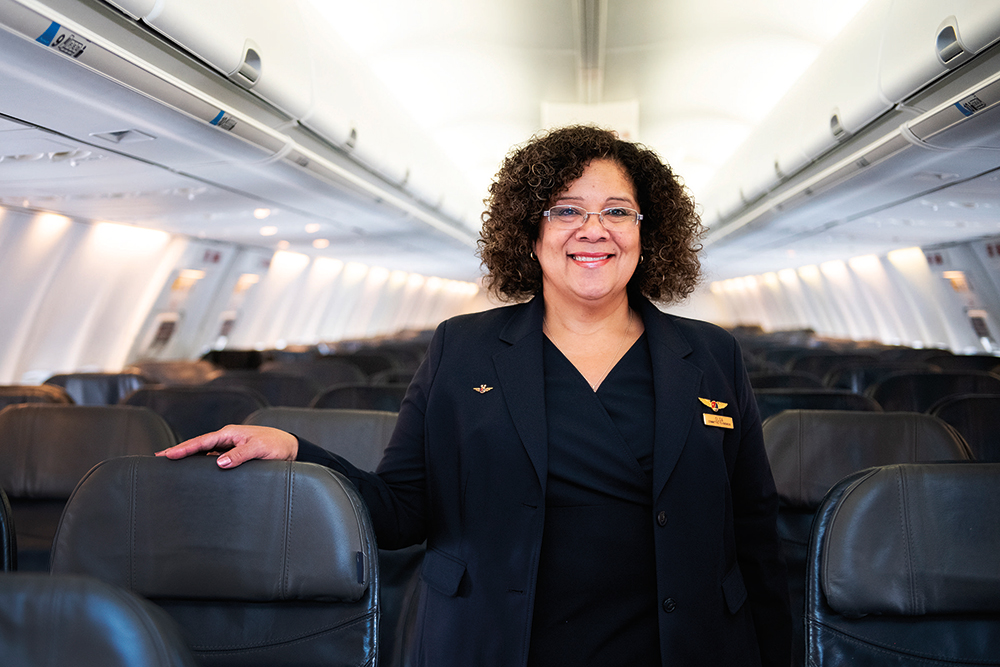 The smiling couple on the Alaska Airlines flight from Chicago to Anchorage had plans to be married in a simple ceremony while visiting Alaska for the first time—with just the two of them and a judge at a municipal courthouse.

That was before they met Olga Robinson.

“I said, ‘I think we should just do the wedding now,’ ” Robinson remembers.

When a passenger nearby spoke up to say she was a minister, the couple considered and ultimately agreed. Robinson and her colleagues sprang into action, fashioning a bouquet from paper napkins and creating a cake from baked goods they had available. Another flight attendant’s mother-in-law, a professional singer, was aboard and sang at the ceremony. The minister officiated, and the captain confirmed the marriage over the PA system to the cheers of a planeload of impromptu wedding guests.

Robinson has built a career around creating positive memories for flyers—though weddings are rare. “I try to connect,” she says. “Even just by looking people in the eyes when I say hello.”

Growing up in New York, Robinson joined the U.S. Army in 1979 and was attached to an aviation unit stationed in Germany, and then Texas. She met her husband on active duty, and they later moved to Anchorage, where they would raise three children. Robinson found a job at another airline before joining Alaska.

For nearly 50 years, Robinson has also done volunteer work, including for her church, for an Alaska high school making prom corsages, and at a neonatal intensive care unit comforting babies. And she returned to college recently, earning a degree in human resources.

Throughout her varied activities, Robinson aims to “do the right thing,” and she treasures the knowledge she gains: “When you give a bit of yourself, you learn things, too.”

I can’t get enough of waking up in the morning to hang out with co-workers who are like brothers and sisters to me. And I like seeing familiar customer faces as well as faces that might become familiar. It brings me joy to be part of an experience on a particular plane, for a particular time.

What advice do you have for new hires?

Be a good listener and storyteller. People like sharing stories you can learn from. Sometimes, they want to hear yours, too.

What are your favorite places to travel?

Sitka, Alaska, and Chicago, Illinois. If I had a short vacation, I’d go to Sitka. It’s one of the most romantic, beautiful places I know. I’d get myself a good cup of coffee and enjoy the small-city scene. After that, I’d go to Chicago to catch a show you can only see in a big city. I like both extremes.

What are must-haves for a travel bag?

Walking shoes, clothes that don’t wrinkle and, if you’re like me, you don’t want to be caught without your favorite shampoo.

“Olga goes above and beyond in all aspects of work and life. She’s gentle and caring with passengers. It’s not surprising that, by the middle of a flight, she may know someone’s retirement plan, current life happenings, and be invited to their dinner party.” —Brandie B., Flight Attendant, Los Angeles

“When I think of ‘thinking outside the box,’ I think of Olga. She uses her resources like no other person I know.” —Serenity O., Inflight Supervisor, Anchorage

“You instantly want to tell her your life story, maybe cry on her shoulder, or just [be around] her. … The way she makes people feel cared for is just incredible.” —Trudy B., Inflight Supervisor, Anchorage

“Olga is an amazing woman and someone I look up to every day. I’m very thankful that I get to work with her, and I’m very fortunate that I’ve worked with her for so many years.” —Tracey L., Inflight Base Manager, Anchorage

Alaska Airlines employees such as Olga Robinson are the reason for our excellence. Join us in creating an airline people love. Visit alaskaair.jobs.