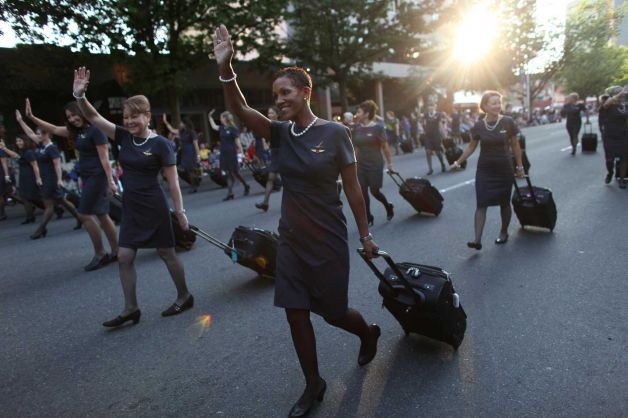 For six years, flight attendants have danced down the streets of Seattle in the city’s annual Torchlight Parade, showing everyone that the famous “Alaska Spirit” doesn’t stop in the air.

The team walks 2.5 miles through downtown Seattle in full uniform, armed with suitcases, performing choreographed dances. This year, the team is expected to be 45 flight attendants strong, dancing to Uptown Funk by Bruno Mars and More by Usher.

“Seafair is such an integral part of summer in Seattle, being able to participate in the parade and share that energy with all of the spectators is amazing,” says Jessica Eller, who leads the drill team with Maya Anderson. Eller and Anderson also coordinate the team for the parade and any other events leading up to it. 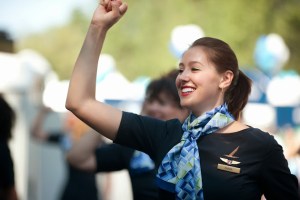 “We work with incredible people who are really committed to their communities,” says Eller. “I love coming together and sharing in that.”

Beginning in May, flight attendants countrywide begin practicing in preparation for the Torchlight Parade in July. The choreography is posted online for everyone involved and everyone on the team is encouraged to practice during breaks or layovers.

“If there’s one thing I would tell everyone about the team, it would be that yes, flight attendants can dance,” says Orlando “Orly” Tercero, a member and four-time choreographer of the drill team. “It’s our chance to show our spirit in the air and on the ground.”

Seattle’s Torchlight Parade is their main event, but the team has made appearances at the Portland Rose Festival and sometimes, if you’re lucky, you can see some practicing in the airport.

Some flight attendants take vacation days to be available during the parade. Megan Brown, a current member, pushed back her family vacation this year to perform at Torchlight on July 25. Other drill team members are taking time off to fly to Seattle for the parade.

Check out the drill team’s Portland performance from 2012:

Brown never thought she’d perform through the streets of Seattle, but once she tried it she was hooked and has performed every year.

“Once you feel the energy of the crowd, you’re hooked,” says Brown.  “It’s amazing, they love it.”

The flight attendant drill team will be accompanied by an Alaska Airlines float, bands and the Seafair pirates during the parade.

“It’s great to work for a company that lets you do more than just your job,” says Tercero. “I love it.”

Practices are two hours, every other day at Alaska’s flight operations building near Sea-Tac International Airport. Tercero pulls up his red Mini Cooper, opens all the doors and plays music from the stereo while flight attendants practice their routine in the parking lot.

“Everyone always freaks out because they think they aren’t ready,” says Tercero. “But when the day comes, they’re all like BAM!”

This year, the dances are getting a little “funkier.”