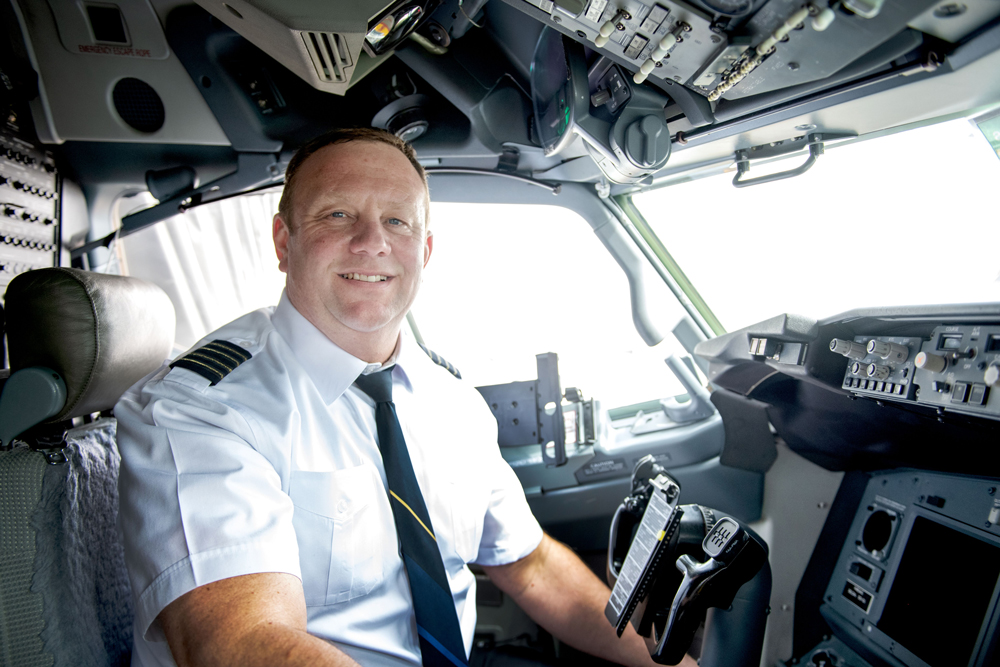 Kurt Olson, Captain based in Portland.

When a guest’s Starbucks latte spilled because another guest accidentally bumped her as she was boarding a flight from Portland, Oregon, Captain Kurt Olson went into the terminal and bought a replacement with his own money.

To celebrate a little boy’s birthday on a flight to Maui, Olson gave him a flight deck tour, drew planes on a card, invited the whole crew to sign it, and enclosed $20 from his own pocket so the youngster could treat his family to celebratory ice cream on the island.

And Olson arrives at the airport an hour early for every flight so that he can spend time in the boarding area chatting with families or guests who look like they might be nervous or have special needs. He’s also been known to help guests with boarding and luggage, and during deplaning, he makes it a point to stand at the aircraft door to thank guests.

“When I first started my career, it was more about the flying and the technical aspects, but soon I realized that there was more to being a captain than the aviating,” says Olson, who’s been with Alaska Airlines since 2000. “It’s just as important to connect with people and provide an exceptional guest experience.”

Arriving early also gives him ample time to connect with his crew to create a positive environment, encourage communication and show appreciation, including providing treats, typically Mentos. “We are all on the same team and working for the same goal of great service for our guests. I want my crew to know I’m here for them, and I appreciate them, and that people love this airline because of them and our other standout employees,” he says.

Inspired by his dad, who had a private pilot’s license, Olson decided to become a pilot while in college, when he tried and loved an introductory flight. Alaska was his only employer choice, because of its values and structure, he says. “I didn’t even apply anywhere else.” — M. Dill

The ever-changing dynamics due to factors such as weather, air traffic control and crew. Also the travel. It’s great not being in a 9-to-5 job. And safely getting people to their destinations or back home.

What’s important to you outside work?

My wife and our three kids, and our extended family. My sister is an Alaska flight attendant, and it’s great when I get to fly with her. I also like community service. I volunteer with youth sports, and support our own kids in their sports. Also, I got an agriculture degree with a turf-management emphasis—I’d once thought of being a golf course superintendent—so I help organizations and friends with lawns and turf.

What philosophy do you live by?

Just be a good human being—a person of character. I once heard character defined as how you treat those who can do nothing for you.

“Kurt exemplifies all the values we have at this company—own safety, do the right thing, be kindhearted, deliver performance, be remarkable—and he does it extremely well. He makes such a big impact, not only operationally, but with his guests and his co-workers. He’s a pretty special guy.” —JP W., Base Chief Pilot, Portland

“Kurt is respected by his peers, and guests love him. Anyone who comes in contact with Kurt loves him. He personally introduces himself to each crew member and does a thorough safety briefing. He makes a warm welcome announcement to our guests and tells them what to expect. Flying with Kurt is always a pleasure.” —Tracey A., Flight Attendant, Portland

“Kurt treats us all like we’re special. He makes us feel like we are important—that he cares, and that he’s truly taking care of us.” —Terri N., Flight Attendant, Portland

Alaska Airlines employees such as Kurt Olson are the reason for our excellence. Join us in creating an airline people love. Visit careers.alaskaair.com.