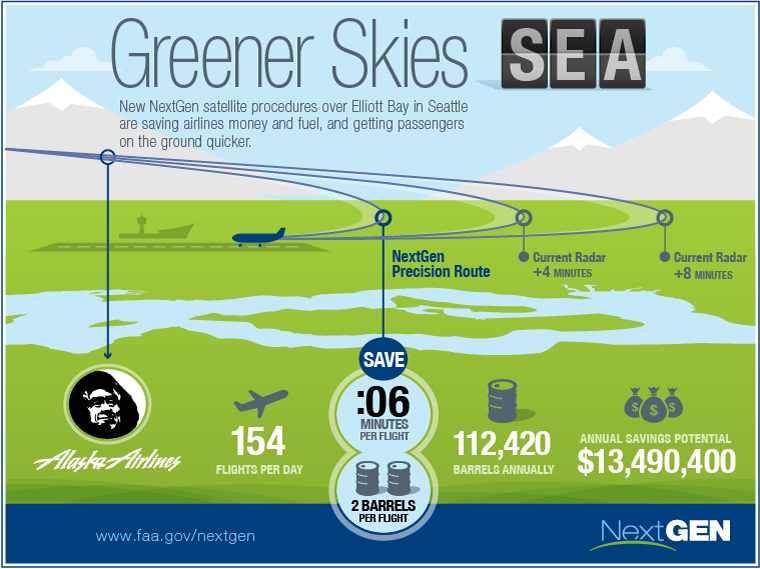 In the hearing to examine the Federal Aviation Administration’s progress on NextGen, Chairwoman Sen. Maria Cantwell, D-Washington, highlighted the work that Alaska Airlines is already doing.

“One of the areas I mentioned is the implementation of the Greener Skies initiative over Seattle, where Alaska Airlines partnered with (the Port of) Seattle, Boeing, the FAA, and leveraged Alaska’s pioneering efforts on NextGen and performance-based navigation,” Cantwell said. “Alaska’s private investment and research in this field has benefited passengers throughout the nation. It is critical that we continue to fund the research and development that will help achieve these technically complex capabilities and long-term goals.”

While Alaska has begun NextGen arrival procedures at Sea-Tac – “akin to the plane sliding down the banister rather than taking the stairs” – Beck asked for congressional support for FAA rule changes to allow aircraft on curved or straight-in paths to be closer together when approaching parallel runways.

“We are currently in phase two of Greener Skies, and our objective is to obtain a waiver to the Air Traffic Control Handbook that would allow the implementation of the ‘Established on RNP’ procedure,” Beck said. “This mechanism will allow for the reduced separation of 1.5 miles between approaching aircraft, and for those aircraft to approach on both straight-in and curved paths. This reduction in separation is a key factor in reaping the full benefits of the Greener Skies initiative.”

Today, aircraft must be separated by 1,000 feet vertically or 3 nautical miles laterally until they are “established” on straight-in final segments to dependent parallel runways. One of the key goals of NextGen is to implement rule changes that allow aircraft to be established on both curved and straight-in paths, allowing for reduced separation between the aircraft of just 1.5 nautical miles diagonally. The key benefit of reduced separation is increased airspace efficiency. Thirteen airports in the National Airspace System would benefit from this rule change.

“We have experienced significant success implementing the two new arrival procedures as part of phase one of the Greener Skies initiative,” Beck said. “But the second phase, which will deepen the impact of this program by optimizing our approach protocols in tandem with the arrival procedures, has encountered setbacks in its approval process. In short, the benefits we gain during the descent from cruising altitude to the beginning of our final approach are considerable; extending those benefits all the way to the runway is our next goal.”

An FAA report on NextGen is due in July.

“If the most fuel efficiency is out of this approach issue, then what can we do to accelerate that during this time period while we’re also getting the larger cross-navigation system replaced?” Cantwell said at the end of the hearing.

As an early adopter and champion of NextGen initiatives, Alaska Airlines hopes to count on congressional support to advance three key issues:

2. Publish and implement the amended RNP approach procedure. Though the approach procedures were published in 2013, they are not fully used – with the notable exceptions of the Denver and Portland airports. These procedures must be amended and fully implemented. Alaska currently foresees a minimum two-year delay from initial publication, which further stalls the benefits of NextGen. Additionally, continuity in the teams developing these procedures will reduce the time to implementation.