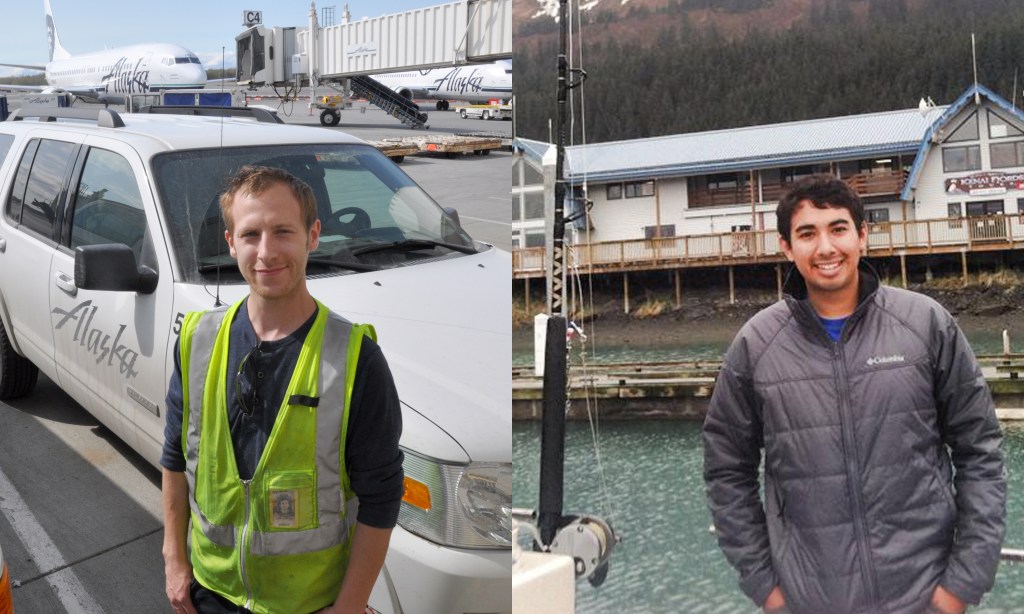 A college student’s Alaska adventure was nearly derailed before it even started – until Alaska Airlines employees went above and beyond to deliver him to his final destination.

When Flight 139 from Chicago to Anchorage was diverted to nearby Joint Base Elmendorf-Richardson because of unexpected fog May 5, many customers needed help rearranging plans and making connections.

A 21-year-old man on his first visit to Alaska was especially worried.

Andrew Quinones had booked a chartered halibut fishing trip – “something I’d dreamed of doing since I was a kid,” he said.

The boat was scheduled to leave the next morning out of Seward, about 125 miles south of Anchorage – a 2 ½-hour drive.

Because of the time it took to transport customers from the Air Force base back to Ted Stevens International Airport, buses weren’t running to Seward at that time of the evening, and taxi fare probably would have cost more than airfare.

“I was stressing out,” Quinones said. “I had already paid for my fishing trip and would not be able to get a refund. I also had prepaid my hotel in Seward and could not receive a refund on that as well. I was worried that I would be stranded in Anchorage with no hotel or way of transportation.”

That’s when the Alaska Airlines team in Anchorage got creative.

“We said, ‘This is a problem, what can we do?’” said Bridget Thompson, general manager of station operations in Anchorage. “So we formulated a plan to get him to Seward.” Alaska Airlines managers asked for a volunteer to drive the customer to Seward in the airline’s Ford Explorer. Nathan Kracker immediately raised his hand and said, “Where are the keys?”

Kracker, a 25-year-old ramp lead, was born and raised in Anchorage and has worked for Alaska Airlines since 2007. By the time Quinones received his luggage, Kracker was waiting curbside in the Explorer, ready for the five-hour round-trip drive.

“The managers wished me luck on my adventure and I thanked them for everything,” Quinones said. “I felt comfortable. I knew I was in good hands from the moment I arrived at the airport and spoke to the Alaska Airlines manager.”

“How many other airlines would do something like that? None that I know of,” Carlson said. “It shows how far we’ll go to make people happy.”

“We just thought it was the right thing to do,” Thompson said. “It was the customer’s very first time to Alaska; he was excited for his fishing trip the next morning. How could we ruin that?” The drive along the coastal Seward Highway offers views of Cook Inlet and Turnagain Arm as it winds through Chugach National Forest.

“It was a gorgeous day, and it’s one of the most scenic drives you can ever take,” Kracker said. “We talked the whole way – he had questions left and right. He was expecting to find igloos.”

Kracker dropped off Quinones at Best Western in Seward, and returned to the airport by 11 p.m. – before his shift was scheduled to end at midnight.

Supervisors told Kracker he could buy himself dinner and expense it. He saved the receipt, and the big spender was reimbursed for his meal of choice: $4.59 for BBQ Pringles and an Amp energy drink.

“Nathan was probably the coolest guy I met while in Alaska,” Quinones said. “We spoke from the time we left the airport till we got to the hotel in Seward. We talked about our families, what we did for a living and other things. He also was able to show me some landmarks as we drove. I felt as if I was taking a private tour of Alaska.”

Quinones made it in time for his fishing trip – and even caught his limit of two halibut.

Quinones had planned the monthlong Alaska-to-California journey as a gift he gave himself to celebrate his graduation from Johnson University in Knoxville, before he heads back to school to work on an engineering degree at the University of Tennessee.

“Since returning from my trip, I have told countless amounts of friends and family this story,” Quinones said. “I want to thank Alaska Airlines for giving me the opportunity to enjoy my Alaskan adventure. You guys made my trip possible, and you came through with getting me to Seward. I also want to thank the pilots for making a go-around – they made the right decision.”