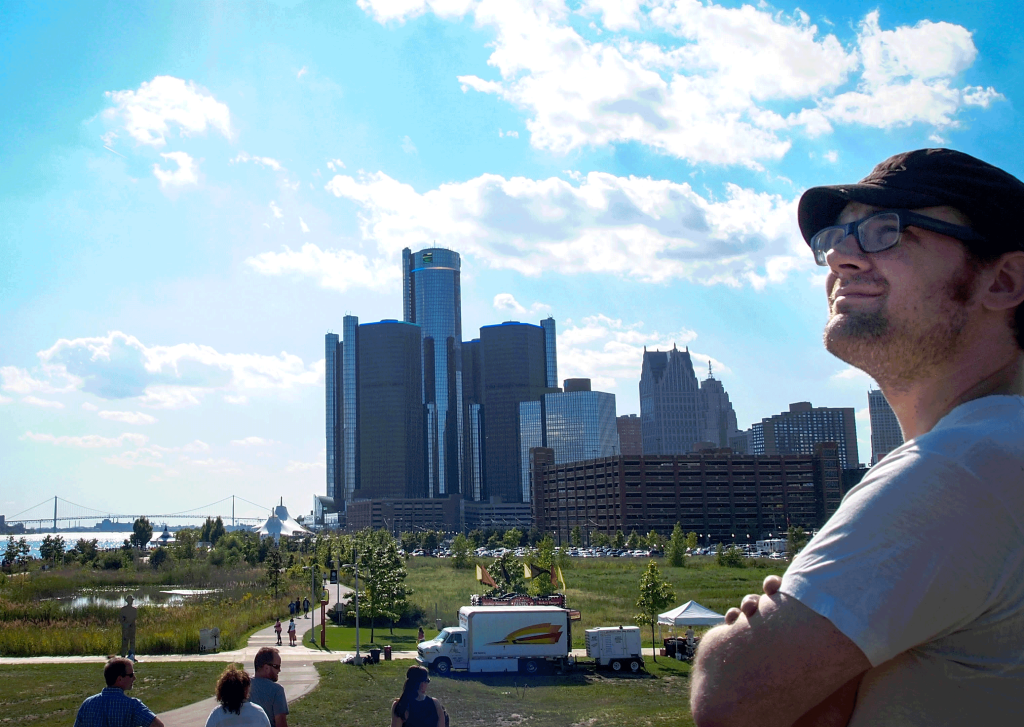 Detroit resident Dan Austin visits William G. Milliken State Park and Harbor on Monday, where the Detroit Riverwalk cuts through the park and follows the river into downtown. (Photo by Emily Bingham)

This month, Alaska Airlines launched daily nonstop service between Seattle and Detroit. For on-the-ground advice about things to do in Detroit, we turned to resident expert Dan Austin, a journalist at the Detroit Free Press who also runs historicdetroit.org and has written two books about the city’s legendary architecture.

“Detroit is a city that is on its way back, but its reputation isn’t doing it any favors,” Austin said. “Nine out of 10 people I talk to who visit Detroit for the first time say they are always impressed, that the city far exceeds their expectations.

See it for yourself: find flights to Detroit

“Folks should give Detroit a chance. It’s a city of unparalleled beauty, history and spirit, yet it’s a city with an undeniable edge. Gritty. Blue-collar. But very, very real. This isn’t Disneyland, but the proud people of Detroit wouldn’t have it any other way.”

If you’re planning to visit Detroit, here are a few of Austin’s recommendations and insights.

Why do you love this city?

The culture is incredible; the history is amazing; the architecture is mind-blowing. I mean, where else in the world can you go and see a Van Gogh, an abandoned skyscraper, the chair Lincoln was shot in, see some of the most mind-blowing street art and graffiti, tour the studio where almost every Motown song you ever heard was recorded, and take a cruise on a river all in one day?

So what should I do if I’m visiting Detroit for the first time?

Two must-sees are the Detroit Institute of Arts in Midtown and The Henry Ford museum and Greenfield Village in Dearborn. The DIA is home to an incredible collection filled with a who’s who of artists, and the Rivera Court – painted by Diego Rivera during his time with Frida in Detroit – is stunning. At The Henry Ford, you can see the Rosa Parks bus, the limo Kennedy was shot in, Edison’s actual workshop and so much more. It’s the place to go for American history buffs.

The Motown Museum is housed in the original Hitsville, U.S.A., building. You can take a guided tour into the studio where everyone from the Four Tops, the Temptations, the Supremes and Smokey Robinson and the Miracles recorded those tunes everyone knows the lyrics to.

The Detroit Riverwalk is a great place to take a jog along the water. Belle Isle is a huge island park smack dab in the middle of the Detroit River, and is now run as a state park. It has a gorgeous conservatory, an aquarium, a beach, beautiful fountains and more. Don’t miss the views of the city skyline from the park. Detroit’s renowned architecture shouldn’t be missed. Pure Detroit offers free tours during the weekend. Bring your camera.

If you were taking a visitor out to dinner, where are a few places you might go?

As the city bounces back, we’re seeing an insane number of restaurants open up. The best of the newbies have to be Wright & Co. and La Feria, a Spanish tapas joint. I’m vegetarian, so Detroit Vegan Soul is one of my favorite places; even my meat-munching friends enjoy the food there. Supino is the undisputed king of pizza in Detroit, though if you want a Detroit-style pizza, you need to check out Niki’s in Greektown or one of a dozen or so Buddy’s Pizza locations sprinkled around metro Detroit. The Detroit area is home to a huge Middle Eastern community, so there are oodles of killer restaurants around, especially in Dearborn. And there’s always Slows, a barbecue spot that has achieved almost mythical status both in Detroit and nationally.

What about bars or breweries?

Detroit is home of the dive bar, and there are far too many great ones to name, let alone count. Motor City Brewing Works in Midtown is a longtime favorite of mine. Tasty beer and tasty pizza. A block or so north of there is The Bronx, a great place to sip some suds during the summer on the patio. St. Cece’s in Corktown, just west of downtown, offers cheap booze and upscale food in a beautiful but laidback setting. During the winter, cozy up to the fireplace. For fine cocktails, Sugar House is the spot. Baker’s Keyboard Lounge is a legendary venue for live jazz. Northern Lights often hosts Dennis Coffey, a Funk Brother who played on countless Motown songs.

As far as hotels or lodging, is there a part of the city where you’d recommend people stay?

Almost all of Detroit’s hotels are downtown, with the finest being the landmark Book-Cadillac Hotel. Once one of the most glamorous in the country, the Book-Caddy hosted the likes of Katharine Hepburn, the Beatles, Martin Luther King Jr., FDR and JFK. It was a stone’s throw from Tiger Stadium, so all the baseball greats used to stay there. We’re talking Babe Ruth and Ted Williams. In 1939, Lou Gehrig collapsed on the Book-Cadillac’s staircase. That day, he took himself out of the lineup, breaking his consecutive game streaks. Sadly, the hotel was a victim of the city’s well-known decline and closed in 1984. It would sit empty for more than two decades, and fell into tremendous disrepair. But it has been reborn as a Westin and is home to Roast and Café 1924.

There’s also a Marriott in the tallest tower of the Renaissance Center, offering unparalleled views of metro Detroit and our neighbors in Canada. The Fort Shelby Hotel downtown is another historic hotel, dating back to 1916. It, too, sat abandoned for decades and is now a gorgeous Doubletree. The Inn on Ferry Street is a collection of historic homes that are a block from the DIA, the Wright Museum of African American History, the Detroit Public Library, Wayne State University‘s campus and more.

There is a spirit here in the city that I have never found anywhere else. It is a never-say-die spirit. A refuse to give-up spirit. The city is an undeniable underdog, and it seems to relish the challenge. “Count us out? Fine, we’ll show you.” One of my favorite historical tidbits about the city illustrates how that attitude is nothing new: After the city burned to the ground in 1805, Father Gabriel Richard said, “Speramus meliora; resurget cineribus.” For those not up on their Latin, it means, “We hope for better things; it will rise from the ashes.”

Detroit has risen from the ashes before – I want to be here to watch it as it does it again.

What’s your favorite hidden gem in Detroit? Let us know in the comments.