Basketball superstar Kevin Durant is teaming up with Alaska Airlines to support youth and education programs in the San Francisco Bay Area. Between Durant's NBA championship win with the Golden...

SEATTLE, Sept. 18, 2017 /PRNewswire/ — Basketball superstar Kevin Durant is teaming up with Alaska Airlines to support youth and education programs in the San Francisco Bay Area. Between Durant’s NBA championship win with the Golden State Warriors last year and Alaska’s expansion into San Francisco with its purchase of Virgin America, Durant and the airline share a common purpose of making a difference in Bay Area communities. 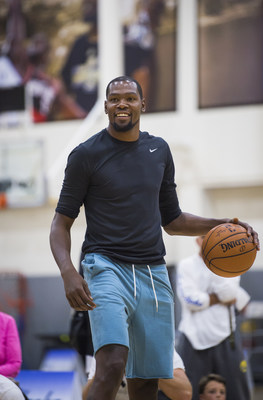 "With his exceptional talent, work ethic and heart, Kevin is loved by the communities where he’s played –from his time as a Seattle SuperSonic to the roots he’s planting in Oakland," said Brad Tilden, CEO. "With Alaska growing and expanding in the Bay Area along with Virgin America, we can’t think of a better ambassador to help us than Kevin. We’re looking forward to joining him in giving back and becoming an integral part of the Bay Area community."

Durant will assume the official title "Advisor to the CEO". As part of the exclusive partnership, he will represent the company at Bay Area events and in key marketing initiatives, as well as working with Tilden and the airline’s employees to support youth and education programs. Among them is the Kevin Durant Charity Foundation, which serves to enrich the lives of at-risk youth from low-income backgrounds through educational, athletic and social programs.

"With their expansion into the Bay and their commitment to my foundation, my partnership with Alaska couldn’t be a better fit," said Durant. "I’m looking forward to working with them in the community and partnering with Brad and his team on creative development and strategy as well."

Alaska Airlines is making a donation to further the work of the Kevin Durant Charity Foundation, including his BUILD IT AND THEY WILL BALL project to build and renovate youth basketball courts in underserved neighborhoods. To date, the KDCF has unveiled 14 courts in four different countries, including two in Oakland and one in nearby Redwood City.

Alaska will partner with Durant and business partner Rich Kleiman’s Thirty Five Media production and creative arm on content development that will be shared across Alaska’s and Durant’s social channels including video distribution on Durant’s YouTube channel.

Dedicated to community service and especially youth and education, Alaska Airlines has a long-standing partnership with another sports superstar, Seattle Seahawks Quarterback Russell Wilson, who serves as its CFO "Chief Football Officer" working with the airline to reach youth in the Pacific Northwest.

Editor’s note: An image of Durant is available for download at www.alaskaair.com/newsroom.

Alaska Airlines, together with Virgin America and its regional partners, flies 40 million guests a year to 118 destinations with an average of 1,200 daily flights across the United States and to Mexico, Canada, Costa Rica and Cuba. With Alaska and Alaska Global Partners, guests can earn and redeem miles on flights to more than 900 destinations worldwide. Alaska Airlines ranked "Highest in Customer Satisfaction Among Traditional Carriers in North America" in the J.D. Power North America Satisfaction Study for 10 consecutive years from 2008 to 2017. Learn more about Alaska’s award-winning service and unmatched reliability at newsroom.alaskaair.com and blog.alaskaair.com. Alaska Airlines, Virgin America and Horizon Air are subsidiaries of Alaska Air Group (NYSE: ALK). 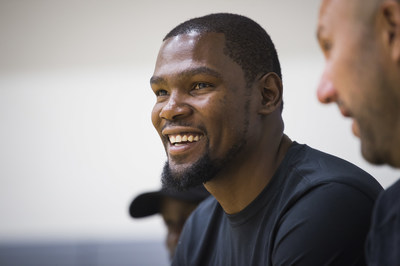