In celebration of the regular season opener and Seattle's quarterback, Alaska Airlines is unveiling a new Russell Wilson plane. Guests flying to Denver this Friday, Sept. 7, are invited to sport...

SEATTLE, Sept. 5, 2018 /PRNewswire/ — In celebration of the regular season opener and Seattle’s quarterback, Alaska Airlines is unveiling a new Russell Wilson plane. Guests flying to Denver this Friday, Sept. 7, are invited to sport their blue at a tailgate-inspired celebration at Sea-Tac’s C gates. 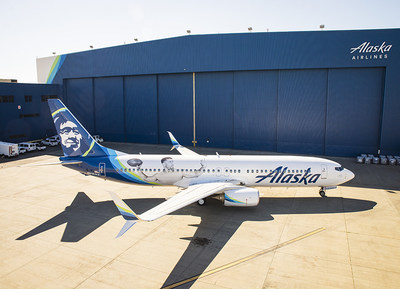 Throughout football season, Alaska Airlines guests wearing a Wilson jersey will be granted early boarding on all Seattle-departing flights.

"I love putting on my No. 3 jersey for the first game of the season," said Natalie Bowman, Alaska Airlines’ managing director of brand and marketing communications. "At Alaska, we’re excited to show our hometown pride, support our quarterback, and send fans to Denver in true football fashion."

Above the Boeing 737-800 aircraft door, Wilson’s tagline, "Dream Big. Fly High." is on display. The tagline speaks to Wilson’s character on and off the field. Through his multi-year partnership with Alaska Airlines, the Chief Football Officer is committed to celebrating Seattle football fans and building a strong local community. Wilson works with the carrier to support youth charities and education programs, including:

Before Flight 682 to Denver this Friday, fans will be treated to tailgate food, a live DJ and custom photo-booth at Sea-Tac’s C gates. Upon boarding the newly outfitted plane, guests will find a party favors on their seats, courtesy of Alaska Airlines.