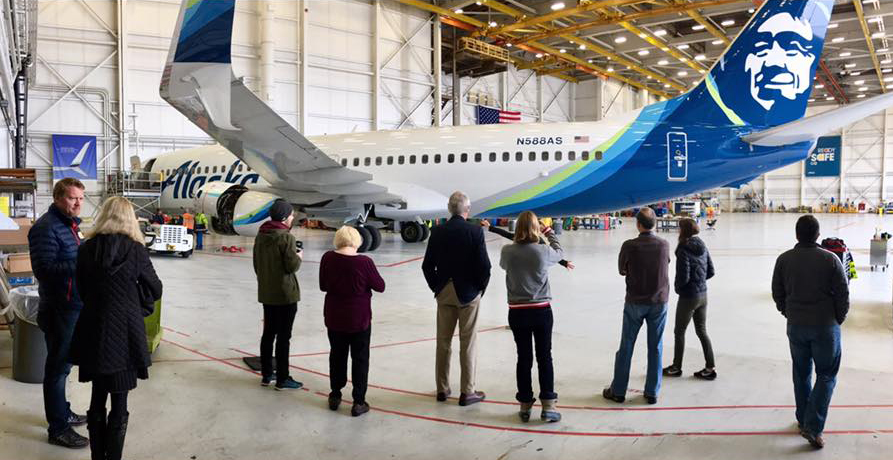 The Fear of Flying Clinic includes a tour of Alaska Airlines’ hangar and culminates in a graduation flight.

Music executive Oscar Flores was so nervous about flying that he hadn’t been on an airplane in 22 years.

Thanks to the Fear of Flying Clinic and some caring Alaska Airlines volunteers, Flores gained the courage to fly from Portland to Kansas City to surprise his mother for her birthday.

“I survived!” Flores said after his recent round-trip flight on Alaska Airlines.

That exclamation was music to the ears of Alaska flight attendants Lynn Hodges and Chris King, whose volunteer efforts with the Fear of Flying Clinic helped Flores take a big step that was more than two-decades in the making – and create some priceless memories with his family.

“My entire family told me how proud they were of me,” Flores said.

The Fear of Flying Clinic is a nonprofit organization based near Seattle run entirely by volunteers. It offers clinics twice a year (the next clinic is in March), where trained airline employees and behavior counselors provide tools for people to overcome their fears.

The clinic includes a tour of the Alaska Airlines hangar at Sea-Tac and culminates in a graduation flight. As a result, most of the graduates continue to fly Alaska Airlines, said King.

“We create a lot of future customers through the clinic, both clients and their friends and families,” King said.

“We talk about our roles on board and how we are trained to deal with many situations, including someone who has a panic attack,” said Hodges, who has been involved with the clinic for three years.

Flores was so confident after completing the clinic that he booked his flight to Kansas City.

“I wish I could say it was an easy experience, but the first flight was very difficult for me,” Flores said. “Leaving Portland, as it was raining, was very bumpy and that created anxiety that lingered throughout most of the flight.”

He said he kept thinking of what Hodges and King had told him about relaxing. His return flight was better, with special attention by the flight attendants who helped ease his nerves.

Connecting with the crew

Taking the time to meet the pilots can be reassuring for fearful flyers as well, said Robin Boone, Fear of Flying Clinic acting director and a commercial pilot of 50 years. Paying attention to pilot announcements regarding anticipated turbulence and the flight plan also helps.

“Thanks to all of you for encouraging me to fly again,” Flores said. “I probably would not have seen my family for another few years had it not been for the clinic.”

Flores has already booked his next flight – he’ll fly to Mexico City to visit his grandmother.

“The transformation of fearful flyers is a fulfilling event for everyone,” Hodges said. “We usually get all choked up at graduation. It’s like we have taken a broken bird and mended its wings and gave it a new life.”