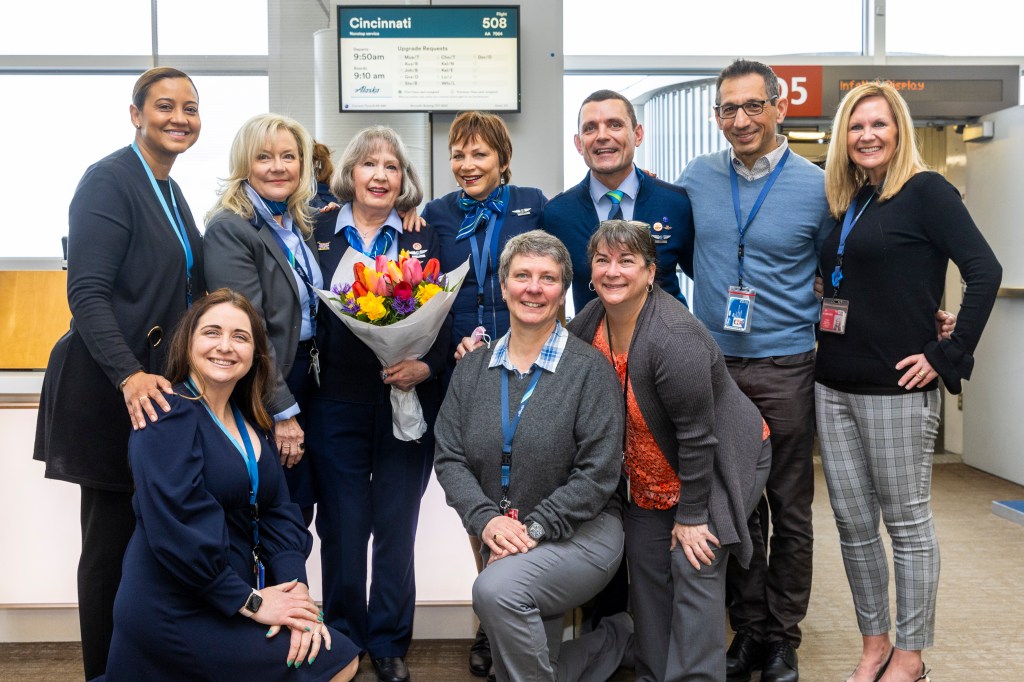 Carole, Denise, Vicky and Linda celebrate over 50 years in the sky

Today is International Flight Attendant Day—a day where we collectively tip our hats to our flight attendants with awe and appreciation for all that you do, every flight, every day to ensure safety and care for our guests. And what better way to honor our inflight team than to celebrate four incredible women who have each spent over 50 years in the skies for Alaska Airlines. Here’s their story.

It was 1967—the year of the mini skirt, gas was 33 cents a gallon, McDonalds introduced the Big Mac, Paul Newman was the national hunk and Carole joined the company as a flight attendant.

Having answered an ad, Carole showed up at the Swept Wing Inn, a motel near Sea-Tac, for what at the time was the largest class ever of new flight attendants: 12. The aircraft they were training on was the Boeing 727. Alaska had just acquired it. Sleek, fast, Carole called it the “Cadillac of the skies.”

Five years later, in 1972, three other trailblazers joined the company — Denise, Vicky and Linda. They were to begin a grand adventure, flying on dozens of different aircraft, wearing multiple new uniforms (all the latest fashion) and inaugurating hundreds of new cities during their careers at Alaska.

It was so grand that when Carole got her 55-year pin this month, and Denise, Vicky and Linda their 50-year pins, they wondered how time had flown so fast.  Reaching over 50 years of service is something very few employees at Alaska Airlines have ever done.  Carole is the longest-serving flight attendant in company history. She’s been with the airline for over half of our 90 years.

Carole, Denise, Vicky and Linda truly are awe inspiring. They define excellence,” said Constance von Muehlen, COO. “They set the high standards of safety and care we follow today, and we are incredibly thankful and grateful for them, as they personify the Alaska spirit.”

Most memorable flights: Working our Ashland charters in Elizabethan costumes, flying to Russia and offering treats for the local children and her favorite—the Fantasy Flights, bringing holiday cheer to underprivileged children.

Staying in a trailer in Fairbanks: As a low-budget option, Carole and fellow crew members overnighted in trailers in Fairbanks.  There was a pilot trailer and a flight attendant trailer. “Sometimes the water wasn’t good, due to the permafrost, but it was cozy.”

Leaders over the years:  Carole recalls Charlie Willis being kind-hearted but “not a very good businessman,” Bruce Kennedy and Ron Cosgrave, “saved the company.“ And Brad Tilden, who volunteered to help her collect trash on a Seahawks charter flight, as being kind. “Here we were on a VIP flight and our CEO is helping me pick up garbage.”

What she’s grateful for: So many of her coworkers, including those from her class that have since retired, Judy B., Joanie S., Lynn O…. the list goes on. “How lucky I have been to work with so many wonderful people.”

Her fav destination:  Sitka where, “it’s just magical. The people are just so incredibly friendly. It’s like stepping back in time.”

Early years: She started as a customer service agent, and then moved to flight attendant.

Most vivid memory: Working the Fantasy Flights in Spokane during the holiday season. “It’s a privilege to see the unconditional love given to these children in housing transition. A blessing for sure.”

She’s thankful for: “When I joined the Alaska Family in 1972, those who were already here were my teachers, they set the standards. Those who have joined our family since continue to teach, bring joy and memories every day. “

Fav place to fly: Her heart is in the state of Alaska. Fairbanks and Anchorage are her favorite places to visit. After that? The Midwest and Honolulu.

What she loves about her job: The people!

Anyone special?  Too many to name. “Alaska Airlines is the people you work with and the friends you make. It is the reason I am still doing the job after 50 years!”

Of all the uniforms over the years, her favorites? “Any of them when I was young!”

Best flight ever: Being part of an Eclipse flight in conjunction with Pacific Science Center. “The views were amazing, especially from the flight deck, and I still have my can of ‘dark’ that we gave out onboard.”

Advice she’d give new flight attendants today: “If a guest is giving you a bad time, remember that the flight will be over soon. Someone has to live with that person all the time!”

She loves: The travel benefits. “My parents were able to see the Arctic and experience the ‘Arctic Bump’ and my whole family was able to travel.”