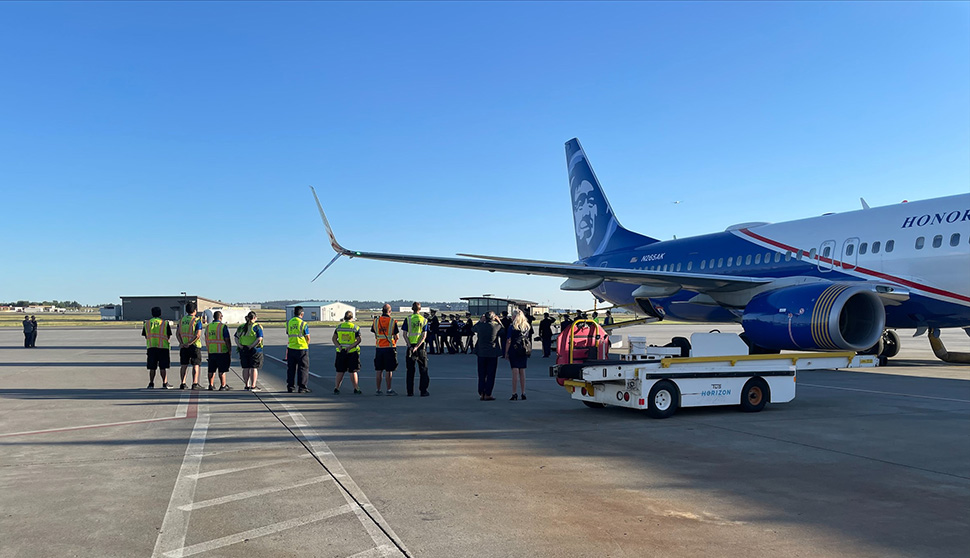 More than seven decades ago, a young military pilot left his hometown of Spokane, Washington for the battlefront in Europe. Last month, his remains arrived home to his final resting place, thanks to Alaska and Horizon Air employees, who made it happen in less than 24 hours.

Eugene Shauvin, a U.S. Army Air Corps 2nd Lieutenant, was piloting a transport aircraft over the Netherlands during World War II when his plane was shot down. Seven decades went by with no news of his whereabouts until spring of last year, when his remains were found and recovered. Shauvin’s daughter, who had been searching for him for years, rejoiced and a plan was put in place to ship her father’s remains back to Spokane. But then came a hitch—the airline that was contracted by the military to fly the remains, was unable to get all the way to Spokane.

Shortly after that, the phone rang at Kate’s desk, our government affairs director in Washington, D.C. On the line was staff from the office of Representative Cathy McMorris Rodgers of Washington state. Their ask—did Alaska Airlines have any ideas on how to help a fallen soldier get all the way home to Spokane?

Kate reached out to Alaska’s managing director of cargo, Adam, who quickly jumped to action and had his cargo team work directly with the military contracting team.

Lawrence, Horizon Air’s manager of Spokane station operations, gathered employees and worked with our Fallen Soldier team to arrange a proper arrival in Spokane, coordinating with Spokane International Airport and local military contacts. And, through some amazing scrambling by our operations team, the Honoring Those Who Serve aircraft was lined up to fly Shauvin home.

Alaska flew the Lieutenant’s remains from Omaha to Seattle and onto Spokane.  Upon arrival, Horizon employees joined planeside in a somber ceremony.

It was an amazing feat of caring and coordination that was accomplished in less than 24 hours by teams of employees at Alaska and Horizon Air, our regional airline, who never shy away from a challenge, especially when it comes to honoring our military and veterans.

A graveside ceremony took place in Spokane on July 23, where an honor guard performed Taps and a 21-gun salute—a hero’s welcome home, 78 years in the making.