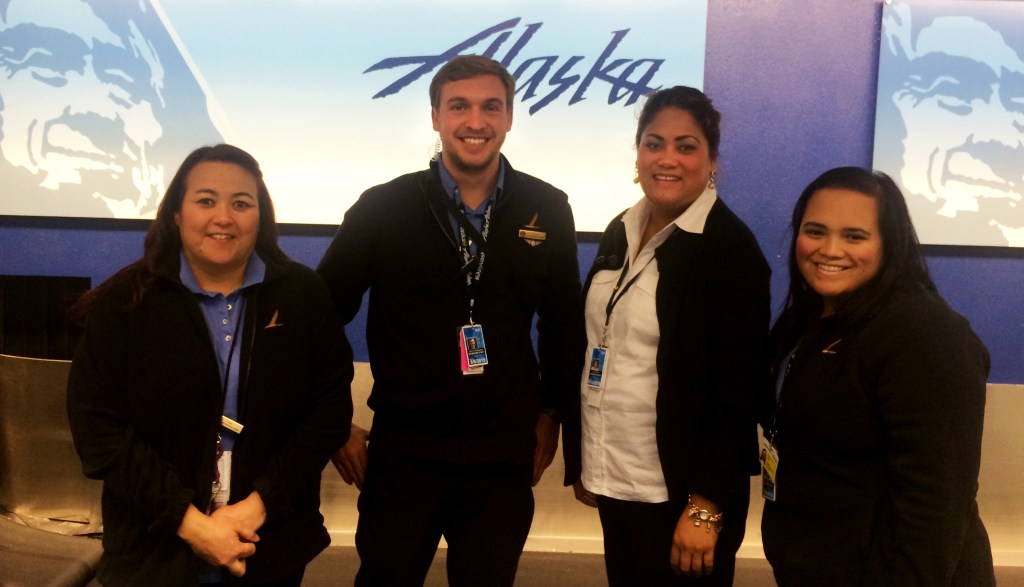 Alaska’s Salt Lake City team helped a customer get home as fast as possible during an emergency. Alec Robinson (second from left) was the ticket-counter lead that day.

When a mom in Las Vegas needed to reach her son in eastern Washington, Alaska Airlines’ Salt Lake City team used some “Alaska spirit” to help her get home as fast as possible, even though it meant putting her on a different airline’s flight.

Lauren Stewart was on vacation in Las Vegas when she found out that her 7-year-old son, Ryder, was in critical condition with breathing trouble in a Pasco, Washington, hospital. Ryder was born two months premature, but had never had respiratory issues to this extent before.

“When I got the phone call from my son’s stepmom early in the morning, I knew something was wrong. She told me that his dad had to take him to the emergency room because he couldn’t breathe very well. My first reaction was to start counting,” said Stewart.  “If the plane left no later than ‘x’ time, I should be able to catch my flight in Portland at ‘y’ time.”

A Kennewick, Washington native, Stewart said this was only the fifth time she’s ever flown. Stewart had originally booked travel home to Kennewick on a different carrier, but since they didn’t operate the day she needed to fly, she bought a one-way ticket on Alaska, which included a layover in Salt Lake City.

When she arrived in Salt Lake City, she learned her flight to Portland, Oregon, on another carrier was delayed, so she missed her connecting flights home to Pasco.

Customer Service Lead Alec Robinson was the ticket-counter lead in Salt Lake City that day. Stewart’s flight was the last departure of the night. While waiting to greet the incoming flight, Robinson decided to help Alaska customers at the gate.

“As I was making my way through the line, Lauren approached me and shared her story,” Robinson said. “I ensured her that the agents handling the rebooking would get her to Pasco as soon as possible.”

The customer service agent assisting Stewart, Sam Moa, pulled Robinson aside and explained that the flight was full and was unsure how they were going to get Lauren home that night.

Realizing how important it was that they help Stewart, Robinson reached out to his friends at another airline in Salt Lake City. Robinson told Stewart to go to that airline’s ticket counter and see if she could get her name on the list for their flight to Pasco.

“Sam and I both understood how important it was that we help Lauren,” said Robinson. “I gave some friends at another airline a call and booked her on a regular ticket. They bumped her up to first class so she would get a seat.”

“I started crying when I found out I was going to make it home,” Stewart said. “Things like this don’t happen to me. I was basically gambling.”

Robinson said that he appreciates the opportunity to assist Alaska customers when their flights are delayed.

“It’s a great opportunity to take passengers who are in a bad spot and show them that Alaska cares,” Robinson said. “Getting Lauren home was a team effort between all of the Alaska employees based in Salt Lake City.”

Stewart made it home in time to be with Ryder in the hospital. He has since been discharged and returned to school the week of Thanksgiving.

“From this day forward, I will only fly Alaska Airlines. Even if I only fly five more times in my life,” Stewart said. “This couldn’t have turned out to be a better experience thanks to the entire Alaska Airlines team.”

Lauren Stewart posted her story on Facebook Nov. 10. The post has since been shared 2,722 times and liked more than 29,580 times. 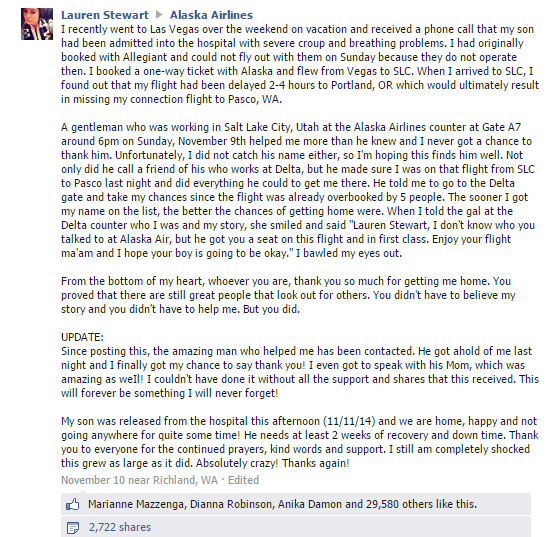 “This is an unreal story and I couldn’t have made it back soon enough if it wasn’t for the spectacular work of Alaska Airlines employees in Salt Lake City. I’m sure, working at an airline and dealing with delays and thousands of people daily, you hear every story in the book of why you need special attention to get home ASAP,” Stewart said. “The fact that Alec jumped up and helped me as fast as he could was amazing. He didn’t have to believe my story, but he did. It felt so good being taken care of and being able to get to the hospital to be with my little guy.”