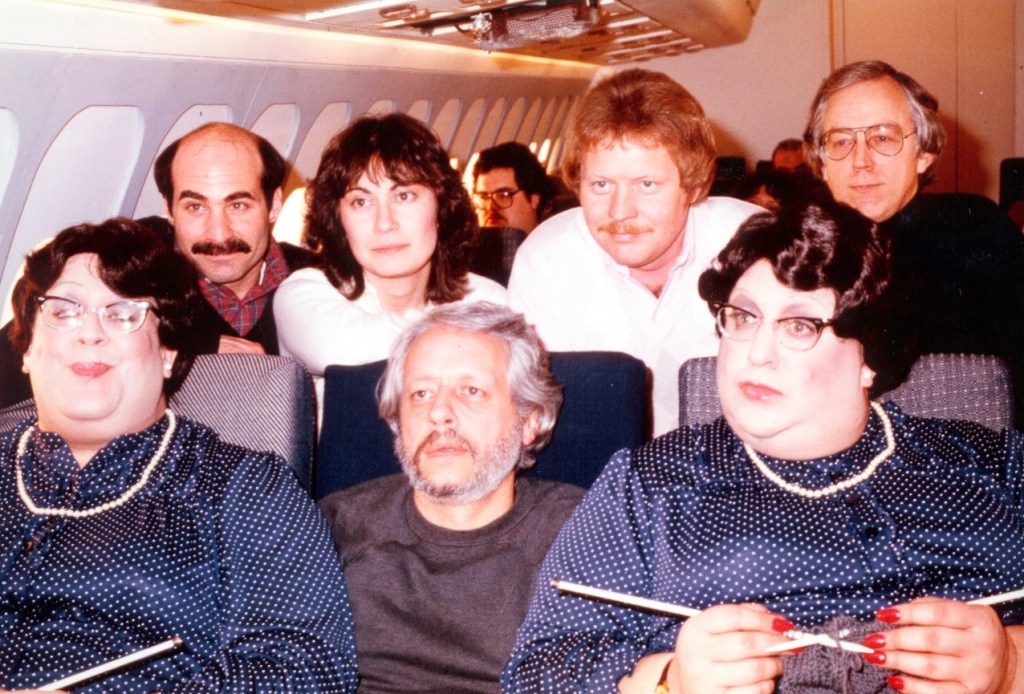 Pausing from a TV commercial shoot back in the day is Director Joe Sedelmaier (front, center). Can you guess who was Alaska’s then-CEO in this photo?

The unconventional Alaska Airlines TV ads from the 1980s and ’90s got a little fresh air at this year’s American Advertising Hall of Fame ceremony.

The commercials were directed by legendary ad man Joe Sedelmaier, who was inducted into the Hall of Fame in April – and some of Alaska’s award-winning commercials were shown at the gala ceremony in New York.

Sedelmaier did hundreds of ads in his career, including classics such as Wendy’s “Where’s the Beef” and FedEx’s “Fast Talking Man.” He also directed about three-dozen Alaska Airlines spots that seized upon the humor of travel pains – such as Pay Toilet and Talking Ticket.

John Kelly, who was vice president of marketing for Alaska Airlines during that era, and later chairman and CEO until he retired in 2003, attended the AAF ceremony.

“We won every award imaginable with those spots over the years, including a number of the very prestigious Cannes International Film Festival Gold Lions,” Kelly remembered. “During that timeframe, our agency, and in particular writer Jim Copacino, developed a string of commercials that pointed out the differences between the other carriers and the personal service on Alaska.”

But it was Sedelmaier’s magic that turned them into instant classics.

“We were just a small West Coast carrier trying to compete against all the big carriers, and those commercials really did a great job of differentiating our service,” Kelly said.

The major carriers were cutting back on inflight food during the era, and adding additional seats that were sandwiched together. So Alaska used humor to point out how it was a cut above.

“It was Joe’s unique approach to humor that really took the spots to a new level, so it was a real pleasure to see him recognized for his genius and inducted into the Hall of Fame,” Kelly said.

While the ads were fun and frivolous, they had a strong strategic underpinning. Alaska, as a young airline, was beginning its expansion into Southern California and Arizona. It was a fresh upstart and was offering a better product – better food, newer airplanes and friendly, caring employees. The ads showed how, at Alaska, things were different. And the airline got noticed.

The friendly voice that narrated Alaska’s TV commercials during their heyday came from renowned actor Peter Thomas. Thomas, whose comforting voice was also behind the NATURE TV series, passed away April 30, 2016 at the age of 91. Kelly credits Thomas with part of the success of Alaska’s commercials.

“I was driving into work one day and heard this announcer for Coca-Cola saying ‘Coke adds life’ – and the way he said it was so unique, and so convincing, that I asked our ad agency to track him down so we could use him,” Kelly said. “He was a pleasure to work with over the years, and such a great talent, as well as a true gentleman.”