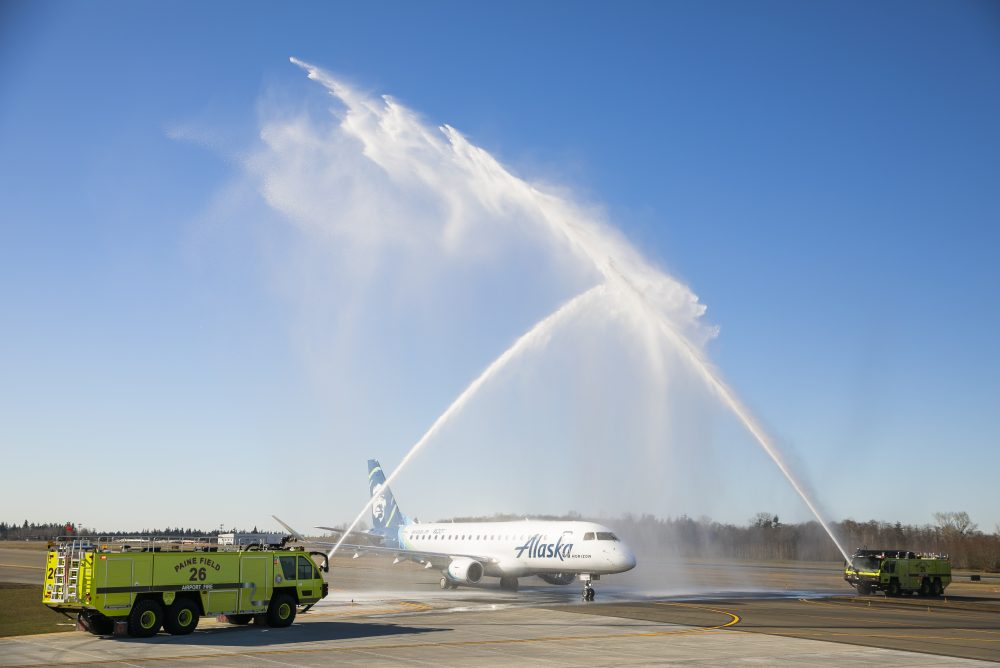 At 10 a.m. today, Alaska Airlines Flight 2878, with service provided by Horizon Air, made history when it departed from Everett to Portland.

“This is a huge moment for Horizon, and being here you can see what a big deal it is for the local area. This is what we’re all about,” said La’Princia Miller, a Horizon Air flight attendant.

The aircraft – with 76 guests and four crew members onboard – became the first flight from the new commercial air terminal at Paine Field-Snohomish County airport, unleashing a wave of pride, excitement and so many possibilities.

“This is a game changer. From where I live, the traffic is very predictable coming to Paine Field, like 20 minutes to get here. That’s really nice,” said Joan Carstons, who lives in Kirkland. “Going to Sea-Tac, there can be a wreck or something else happening that day that could cause a longer drive.”

“This is history in the making. I’m just so excited to be a part of it and serve the community I come from,” said Michelle Tagalog, Horizon Air customer service agent who lives in nearby Lynnwood. “Our goal is to give our guests a great travel experience that gets them through the main door and into the terminal in just a few minutes.”

When Paine Field was first planned during the 1930s, it was supposed to be a commercial airport. Instead, it became a different economic engine tied to the aerospace industry in Snohomish County. But now that original goal is a reality: Paine Field is home to the nation’s newest passenger air terminal – and Alaska is helping lead the way.

Today, just three flights departed from Paine Field. By mid-March, we’ll have our full schedule of 18 daily nonstop departures to 8 West Coast destinations that are most popular with our guests. Horizon Air is providing the all-jet service on the Embraer 175 aircraft, which features first class and premium class seating.

Paine Field makes catching a flight easier for more than one million people living in North Puget Sound. Many will enjoy shorter commutes to the airport: more time in the air and less time on the roads, which will ease traffic congestion.

Map out your new travel plans to and from Paine Field and purchase your Alaska Airlines tickets now!