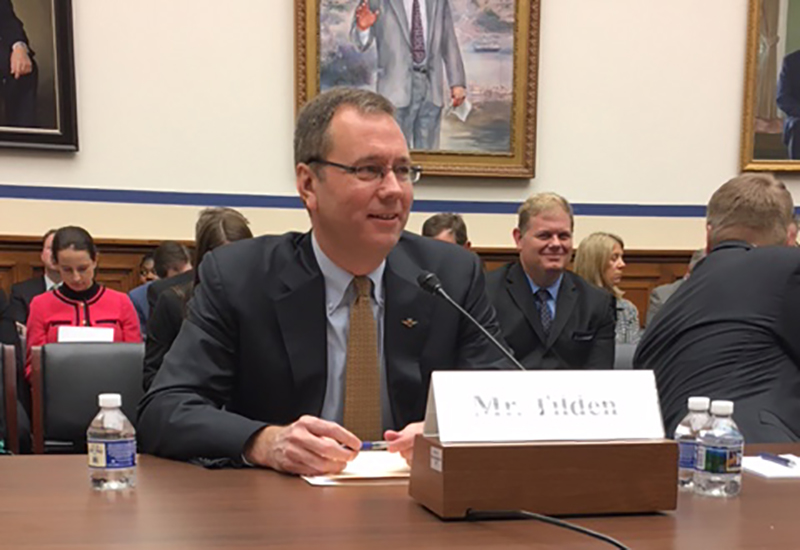 As airlines head into the busiest travel season of the year, one big worry looms: the nation’s antiquated Air Traffic Control (ATC) system.

The ATC system is a critical part of the U.S. economy and air travel infrastructure, but hasn’t been modernized at a pace that can keep up with current air traffic levels. In fact, very little upgrades have been made to the system over the last few decades. Today, 27,000 flights land in the United States every single day using essentially the same paper strips and ground-based radar system that have been in use since World War II.

This outdated system while extremely safe leads to delays, cancellations and needlessly long flight paths for the two million travelers who fly every single day. In fact, half of all flight delays are now a result of Air Traffic Control issues.

Alaska CEO Brad Tilden says it’s imperative to speed up modernization of our ATC infrastructure to deal with congestion and delays.

For example, GPS technology is used by most airlines for the enroute portion of the trip, but once an airplane starts descending into the arrival and approach phase of a flight, efficient operations are interrupted by the use of 1950s-era radar-based manual procedures.

“Therein lies the specific, big opportunity: We need to modernize the system to connect the enroute navigation structure with the approach phase of the flight using today’s technology,” Tilden said.

Tilden emphasized that Alaska is familiar with this technology – in fact, the airline pioneered it.

“In the mid-1990s, in the state of Alaska, we pioneered what is called Required Navigational Performance instrument procedures, which are GPS-based approaches and a key building block of the next generation of air traffic control technology,” Tilden said. “However, today, more than 20 years later, we are able to use these RNP procedures for just 4 percent of our approaches nationwide.”

Tilden said Alaska believes that ATC reform, including the separation of ATC operations from the FAA and into a not-for-profit, non-government corporation – is needed to put the country on the path of true aviation infrastructure improvement.

Tired of unnecessary delays? Visit Citizens for On Time Flights at www.ontimeflights.org and click “take action” to ask your Member of Congress to fix Air Traffic Control.

Tilden testified on this very topic earlier this year in Washington, D.C., before the House of Representatives Subcommittee on Aviation – see the full text of his prepared remarks below.

Chairman LoBiondo, Ranking Member Larsen, and members of the Committee, thank you for this opportunity to testify today.

I am Brad Tilden, Chairman and Chief Executive Officer of Alaska Air Group. Alaska Airlines is the 5th largest U.S. airline following our recent acquisition of Virgin America. We now have approximately 19,000 employees, 280 aircraft, and 1,200 daily departures to 118 destinations.

We have been in business for 85 years, but do not fit the “legacy” carrier mold, in that we are a low cost, low fare carrier. Our customer-facing employees are focused on making the flying experience – from start to finish – as great as possible every day for our guests. As a testament to this service, we are honored to have been recognized for nine consecutive years as No. 1 by J.D. Power in airline customer satisfaction among traditional carriers.

We are bullish on the U.S. airline industry, and we believe that with our cost structure, our customer orientation, and operational capability, Alaska is well positioned to take advantage of an improving industry. Warren Buffet, who in the past famously derided investing in airlines, now invests nearly $10 billion in the industry. That says something.

The industry has changed a lot. Today the four largest airlines comprise more than 80% of the domestic market, whereas 10 to 15 years ago, it took nine airlines to control that much of the pie. The pervasive bankruptcy and consolidation in the industry have been painful and challenging, but the industry as whole is now in a different, healthier place. Airlines are investing in their facilities, people and products in order to win customers. For example, Alaska Airlines recently launched premium class service, providing our guests more legroom and amenities as an option. We’re enhancing inflight entertainment and connectivity options, adding popular new local food and beverage options and taking steps to make our industry leading loyalty program even more compelling for customers. Beyond these areas, we’re also making major capital investments in things like new seats, space saving bins and airport improvements.

Despite these improvements, it’s very important now that aviation policy support competition in the industry. As you consider the aviation policy issues of the day, we would ask you to embrace policies that keep the industry vibrant, including enhancing the ability for smaller carriers to gain access to facilities, share feed traffic with other larger airlines, etc.

For example, there are different airline perspectives on the Gulf Carrier Open Skies issue. As a smaller airline without a global network of our own, we need to partner with international airlines from all around the globe to have a chance of competing with U.S. airlines that have a global footprint. We believe it is imperative that the U.S. government do zero harm to the vibrant U.S. Open Skies policy.

The subject of this hearing is about building 21st century aviation infrastructure in America. Alaska Airlines believes it is imperative to speed up modernization of our air traffic control infrastructure to deal with congestion and delays and bring it into the modern era. To be fair, modern, GPS technology is used today by most airlines for the en route portion of the trip, but once an airplane starts descending into the arrival and approach phase of a flight, efficient operations are interrupted by the use of 1950s-era radar-based manual procedures. Therein lies the specific, big opportunity: We need to modernize the system to connect the en route navigation structure with the approach phase of the flight using today’s technology.

Alaska Airlines is deeply familiar with this technology. In the mid-1990s, in the state of Alaska, we pioneered what is called Required Navigational Performance instrument procedures, which are GPS-based approaches and a key building block of NextGen. However, today, more than 20 years later, we are able to use these RNP procedures for just 4% of our approaches nationwide.

We simply need to move faster. The future vision should look like this: No longer are airplanes vectored left and right for spacing, or engines shifted from idle to powered as airplanes descend and then level off in a stair step approach to a runway. Instead, aircraft should arrive at a specific waypoint in the sky and a pre-determined point in time (to provide for spacing) and then begin descending in a continuous glide at idle power, following a precise curving flight path to the runway.

As a pilot myself, I can tell you that this country’s air traffic controllers manage the safest airspace system in the world. The FAA is full of highly talented professionals who have made progress on Next Gen. However, under the current governance and funding system, we run a real risk that demand for airspace is going to rise at a rate that is more rapid than our rate of technological innovation, worsening delays.

Alaska Airlines wants to see the United States on a path to deal with these near and long-term infrastructure issues and flourish as the world leader in next generation airspace management. While we understand ATC reform may be a topic of a future hearing, and we know there are numerous viewpoints across the aviation spectrum, we do want to go on record with our belief that ATC reform, including the separation of ATC operations from the FAA and into a not-for-profit, non-government corporation – as many other industrialized countries have done – is needed in order to put our country on the path of true aviation infrastructure improvement.

Thank you for the opportunity to testify today.