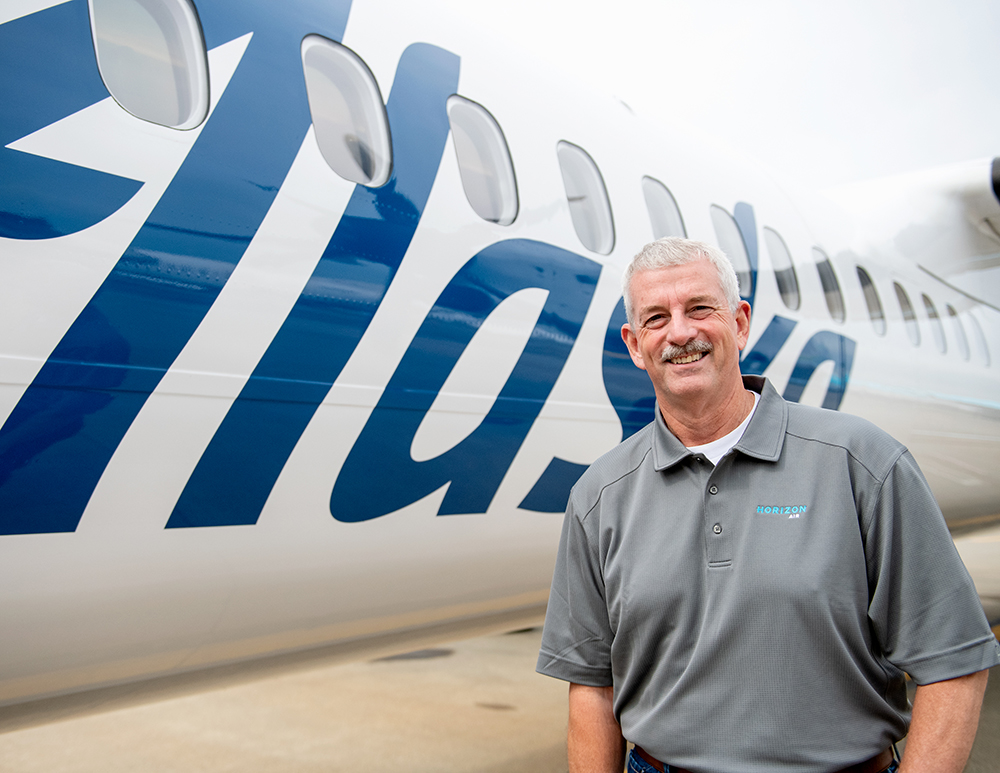 When employees at the Portland Operations Center see the flag in front of their building at half mast, they know to pause for a moment and reflect—and to thank their coworker Mike Teague.

A former Marine, Teague leads up a small team of volunteers who keep Horizon in compliance with federal and state flag protocols. “This is our way of honoring those who served and gave everything for our country,” he says.

It was while serving his country that Teague honed his skills in aircraft maintenance. He worked primarily on F-4 Phantom fighter jets and KC-130 tankers in locations around the world, including in the Persian Gulf during the first Gulf War.

Teague has been with Horizon Air for 26 years—starting as a technician, then lead technician, along with being a temporary supervisor on various maintenance projects. In his current job as quality assurance auditor, he spends about 50 percent of his time overseeing Horizon maintenance operations. The rest, he’s traveling to various repair stations and inspecting vendors to ensure they’re in compliance in repairing Horizon’s aircraft parts.

He’s great at his job, but at the same time, misses having a wrench in his hand.

“As corny as it sounds, I still sometimes miss being a mechanic because I’ve always enjoyed working on planes and getting the job done.” Teague says. “It’s a satisfying feeling when you work all night to get a plane fixed and then you’re there to see it getting loaded with people and taking off.”

But being an auditor and overseeing all functions of the Maintenance & Engineering processes allows him to see a broader scope.

I see the the tremendous pride and dedication that everybody has in their jobs, striving to make our little airline the best it can be,” he says. And he is an ambassador for Horizon to our more than 300 repair vendors worldwide, ensuring compliance. “So, I don’t get to fix airplanes anymore, but that same level of job satisfaction is still there.”

Once a Marine, always a Marine (Teague served for 14 years) he brings the same standards of excellence and safety to his job every day. Founding the flag team is just one example of that.

Teague remembers the exact date that he took on the flag duty, because it was Sept. 11, 2012. There, of course, was a proclamation to lower the flags that day in remembrance of the 9/11 terrorist attacks, but when he arrived at work, he saw they weren’t at half-staff. So, he took it upon himself.

That was almost 8 years ago, and he continues to perform the duty today.