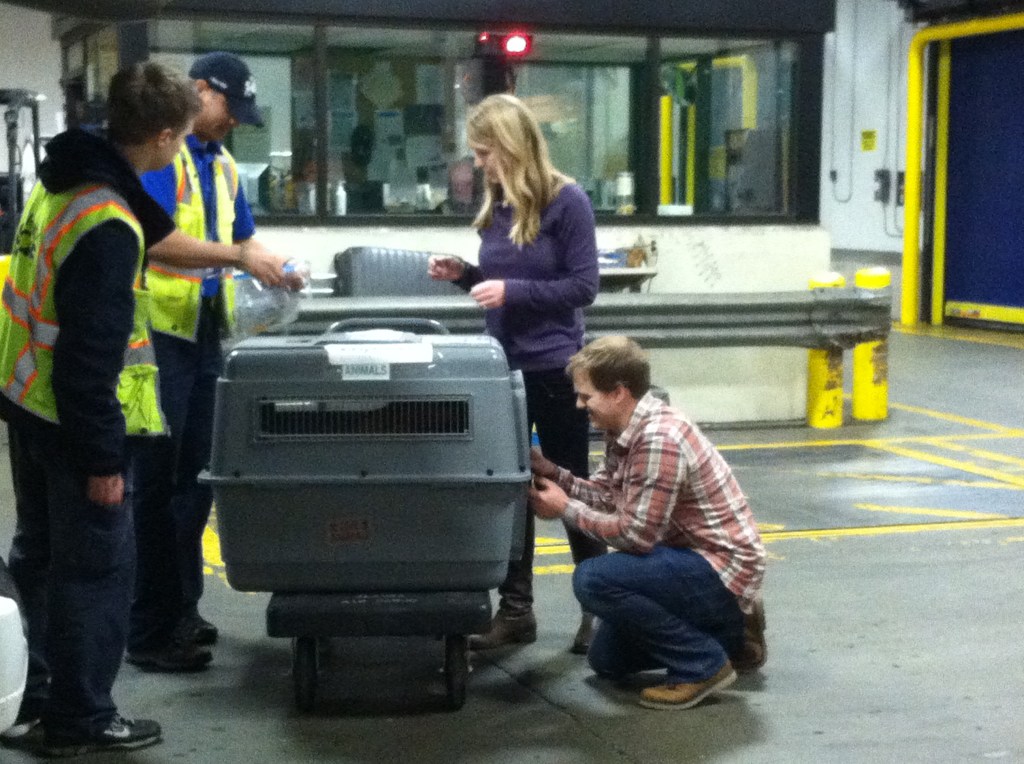 A family’s beloved dog, who went on an unplanned cross-country adventure over the holidays, created quite a stir as dog lovers and Alaska Airlines helped to get her home.

Penny, a floppy-eared vizsla puppy from Royal City, Washington, went missing near her home on Dec. 19, leaving her owners, Kendra and Colt Brown, worried sick.  When Adams County Pet Rescue put Penny’s picture on Facebook, a woman called to say she recognized the dog from a truck stop. A cross-country truck driver had thought Penny was a stray and had taken the dog.

Over the next several days, the Browns made dozens of phone calls to the trucking company. Once they finally tracked the driver down, he was in Iowa. He agreed to find a shelter where he could drop Penny off.

In the meantime, the Browns, at a loss for how they were going to get their dog home, created a Facebook page, “Bring Penny Home for Christmas,” which garnered some 1,300 followers.

On Christmas Eve the Browns got a call from Banfield Pet Hospital in West Township, Pennsylvania. A dog had been dropped off and the microchip confirmed she was Penny.

With their dog 2,400 miles from home, the Browns needed a Christmas miracle and they got one.  Alaska Airlines employees KC Hostetler, state of Alaska sales and community marketing manager, and Marilyn Romano, state of Alaska regional vice president, took a call on Christmas Eve from a reporter in Spokane who had heard the dog’s story.  Could they help Penny?

Romano contacted Betsy Bacon, in Alaska Airlines Air Cargo in Seattle, and soon plans were in the works to get Penny home. Volunteers from a local animal rescue drove Penny to Baltimore, where she boarded Alaska Airlines flight 767 bound for Seattle on Jan. 2.

The story ended happily last Friday with a happy, healthy and very wiggly Penny being delivered by Alaska Airlines employees into the arms of her owners, with news teams from three Seattle-area TV stations there to cover the homecoming.

On Saturday, a customer who had seen the news coverage, called in tears wanting to thank Alaska Airlines for getting Penny home. “Everyone at Alaska Airlines was touched by Penny’s story. As the hometown airline, helping folks in our communities is at the core of who we are,” said Romano. “And our four-legged friends are no exception.”