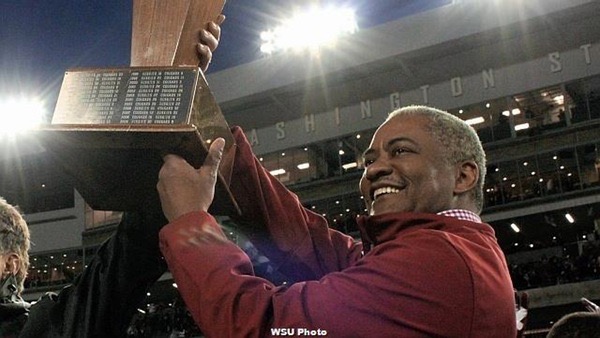 The entire Alaska Airlines and Horizon Air family is saddened today to learn of the passing of Dr. Elson S. Floyd, president of Washington State University. Alaska and Horizon have many ties to WSU and we were honored to have the opportunity to work with Dr. Floyd. His contributions in leading the university were significant as is described in the tribute below from WSU alum and former Alaska Airlines communication leader Greg Witter. Our deepest sympathies go out to Dr. Floyd’s family and the entire WSU community.

Visionary Elson Floyd will not be forgotten

The urgency and energy that Elson Floyd brought to his work as president of Washington State University from Day One back in late May of 2007 suggests he knew he was up against a running clock.

His passing today of prostate cancer that had metastasized brought into focus not just how much he accomplished at Washington State, but how fast he achieved what he did despite the daunting fiscal environment in which he was forced to operate.

Transformative doesn’t begin to describe the depth and breadth of what he accomplished for Washington State.

As legislators cut public funding for higher education in the state by 50 percent, Floyd never flinched. Far sighted, tireless, charismatic and brimming with confidence, he brought a winning combination to WSU at a perilous time. The result was a university that didn’t just survive in the challenging times but thrived.

His quest to make Washington State the best it could be was so intense that he kept news of his failing condition contained to a tight circle of family, friends and colleagues, lest he divert attention from his last great achievement: a WSU medical school in Spokane.

Floyd, who was 59, who set the tone for his ambitious, head-strong leadership style early on when he traveled to every county in the state — 39 of them — looking for ideas on how best WSU could serve its constituents.

Perhaps the clearest, early harbinger of the take-charge approach he would bring to the presidency was the elevation of the Murrow School of Communication to the Murrow College of Communication. The move had been advocated by the Murrow alumni advisory board for more than a decade as a logical way to strengthen one of the nationally renown jewels of WSU’s academic line up. For a variety of mostly political reasons, the idea never saw the light of day — until Floyd arrived. The rapidity with which he analyzed the idea, embraced it, cut through the bureaucracy and turned it into a reality served notice that he was a man of action and ideas.

He prioritized programs and emphasized the importance of putting research to work in the marketplace.

A new era — the Elson Floyd Era — had arrived at WSU. And it’s safe to say the place will never be the same as a result.

His analytical, goal-oriented approach led to sterling achievements. The capital campaign for WSU eclipsed the $1 billion mark — a goal many thought impossible, especially following the economic downtown in 2008.

He opened the School for Global Animal Health after securing the two single-largest gifts in WSU history from Paul Allen and Bill Gates. He turned the Tri-Cities branch campus into a tech magnet and augmented it with the opening of the cutting-edge Wine Science Center. He saw the strategic benefit of collaborating with Boeing and pulled off a stunning coup with the opening of a WSU branch campus in Everett.

Along the way, he put a brake on tuition hikes despite major financial pressures. He also turned back $100,000 of his own salary in 2010 as a show of commitment to the cause in the economic environment.

His most audacious vision — a WSU School of Medicine — will become a reality thanks to approval from the State Legislature in the current session. This crowning achievement brought to bear all of his considerable skills as a visionary and bridge builder, administrator and political craftsman.

“I grew up in North Carolina where my mother worked in a factory and my father was a brick mason,” Floyd told Seattle Business Magazine in 2010. “They never went to high school. I had no idea what a college was when I was growing up, so it’s pretty remarkable that I’m a university president.”

Remarkable for him, a bold awakening for Washington State.

At trustee and other alumni gatherings he liked to say that the administration and faculty at WSU were making strides daily to “increase the value of your diploma.”

Indeed the list of achievements at WSU on his watch is long and impressive. For readers of Cougfan.com, there is perhaps no more tangible evidence of his proactive style than athletics.

Floyd possessed an understanding of, and advocacy for, athletics not seen from the president’s office at WSU since since Glenn Terrell retired in 1985. Rather than lament the immovable — the out-sized influence of athletics on college campuses — Floyd put it in perspective and dove in head first.

Athletics is, by orders of magnitude, the most influential branding tool any university possesses, he once said. Whether you like that fact or not is immaterial. What is critical, he emphasized, is that you support athletics enthusiastically because how you perform on the fields and courts influences the perception of — and support for — everything else your university does. Win in football and applications from prospective students skyrocket. Play in March Madness and donations to academic programs increase. To Floyd, it was basic arithmetic combined with marketing reality.

Jim Sterk, WSU’s athletic director when Floyd arrived in 2007, hardly knew what hit him when the new boss took over. Instead of a president’s office mostly concerned with his accounting skills, Sterk found one pleading for a five-year outline of facilities needs. Sterk’s proposal to upgrade Martin Stadium with premium seating and a new press box wasn’t just welcomed by Floyd but embraced. The same held true for Bill Moos and his plan to construct the Cougar Football Complex in the west end zone.

In 2007, after Tony Bennett guided the Cougar basketball team to March Madness for the first time in 13 years, Floyd was insistent that the coach’s salary be in line with the rest of the conference in order to fend off suitors. Bennett was elevated from $350,000 a year to $800,000. A year later, following a Sweet 16 appearance, Bennett’s salary was boosted to $1 million and the coach turned down offers from Indiana and Marquette and stayed at WSU another season.

“That’s the work of a guy who knows what it takes to excel and I can almost guarantee you no other president in WSU history would have had either the confidence or inclination to advocate for athletics like that,” a WSU trustee told CF.C last week. “To compete in a big-time conference you need to think in a big-time fashion. That’s Elson.”

His 2010 hiring of Moos drove home the far-sighted nature of his thinking.

Floyd’s support for athletics could be found in less public ways as well. Women’s basketball coach June Daugherty marveled early in her tenure that his door was always open to meet with prospective athletes and their parents during official recruiting visits.

In the 2012 football season, when the new south side of Martin opened, Floyd beamed at every home game as he walked the corridors thanking premium seat holders for their support. He was no academician playing a role. His enthusiasm was heartfelt. And anyone who ever sat near him during a game knew he wanted to win and win badly.

Elson Floyd won’t be here to witness the resurrection of Cougar football when the wins start outnumbering the losses, but his influence on that day when it arrives cannot be understated.

A few months after coming from the University of Missouri, Floyd wrote this in the WSU Foundation annual report:

“In the coming months and years, WSU will embark on multiple paths that intersect in a single goal — the continued transformation of WSU into a premier university that advances economic, social, and cultural progress, and serves the needs of the state of Washington and the world.”

Looking back on those words today, they sound almost prophetic when trying to capture the essence of the Floyd Years at WSU.

He lit a fire at WSU that will burn long into the future. His tenure has been nothing short of remarkable in so many ways. The hope is that he has shown us all, especially the Board of Regents, how a modern-day university president thinks and acts.

He will be missed greatly, but his legacy will live on.