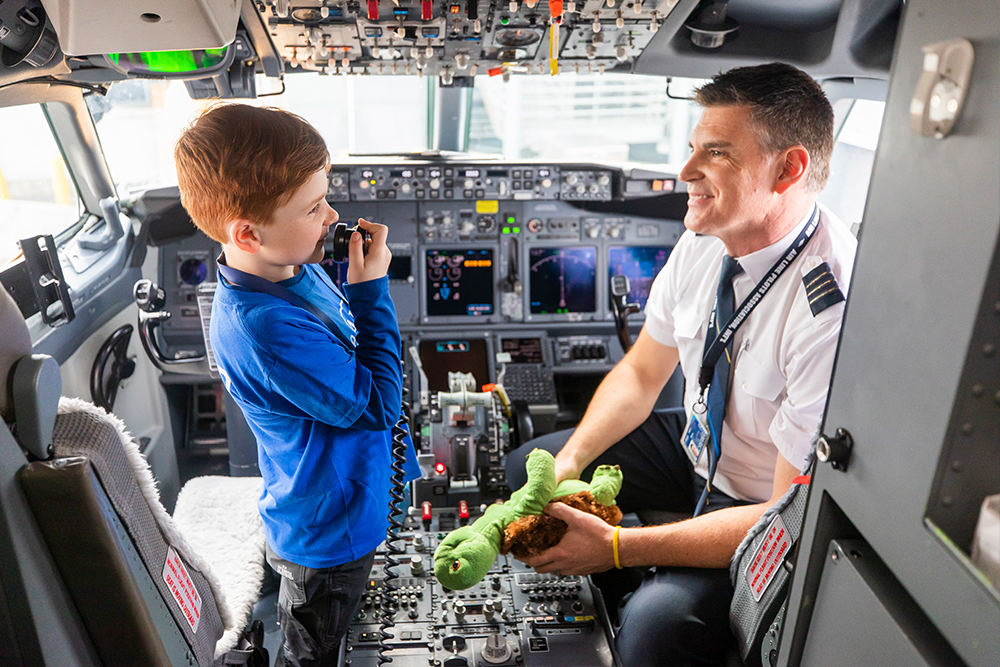 One of the most memorable events for Make-A-Wish kids who fly on Alaska Airlines is the chance to visit the flight deck before their flight. For young Haak Mohr (pronounced: Hawk), of Minneapolis, Minn., it was even more special as his dad and uncle were the pilots.

Ryan Mohr (Haak’s dad) was the first officer and Dan Driggs (Haak’s uncle) was the captain for Haak’s special Make-A-Wish flight from Seattle to Hawaii late winter. The trip was a surprise and a long time coming for the Mohr family, whose lives were jolted when Haak was diagnosed with Wilms tumor cancer just over a year ago.

Haak was a running, jumping, healthy 5-year-old who loved his golden retriever puppy and watching the Minnesota Vikings, according to Mohr, who is based in Seattle. Around Christmas of last year, Haak’s parents noticed a paleness in his skin coloring, so they took him to the doctor. “They sent us home with some Miralax and said he’d be fine,” Mohr said.

But Haak wasn’t fine. When they took him back again 10 days later, he was admitted immediately to Children’s Hospital. Within 24 hours, he was in surgery for a volleyball-sized tumor attached to his kidney. After a six-hour surgery, the doctors informed the Mohr family that the tumor had ruptured and that Haak had stage three cancer.

After 18 days in the hospital, Haak went through eight radiation treatments along with nine months of chemotherapy and daily physical therapy.

“He was just a trooper and stayed positive the whole time,” Mohr said. But the chemo and radiation took a toll on his tiny body. “There were side effects, his immune system shut down and we all stayed home. Keeping him fed and healthy were to be our biggest challenges.”

Mohr, who has been with Alaska for 7.5 years, took some time off.

“I didn’t leave the ground myself for about 10 months,” he said. It was through assistance from Alaska’s Employee Assistance Fund (EAF) that he was able to do that.

“I applied and they were wonderful, helping with bills so we could focus on Haak,” Mohr said. “It gave me precious moments with my son during a time where he was considered critical and fighting a disease that could be terminal.” 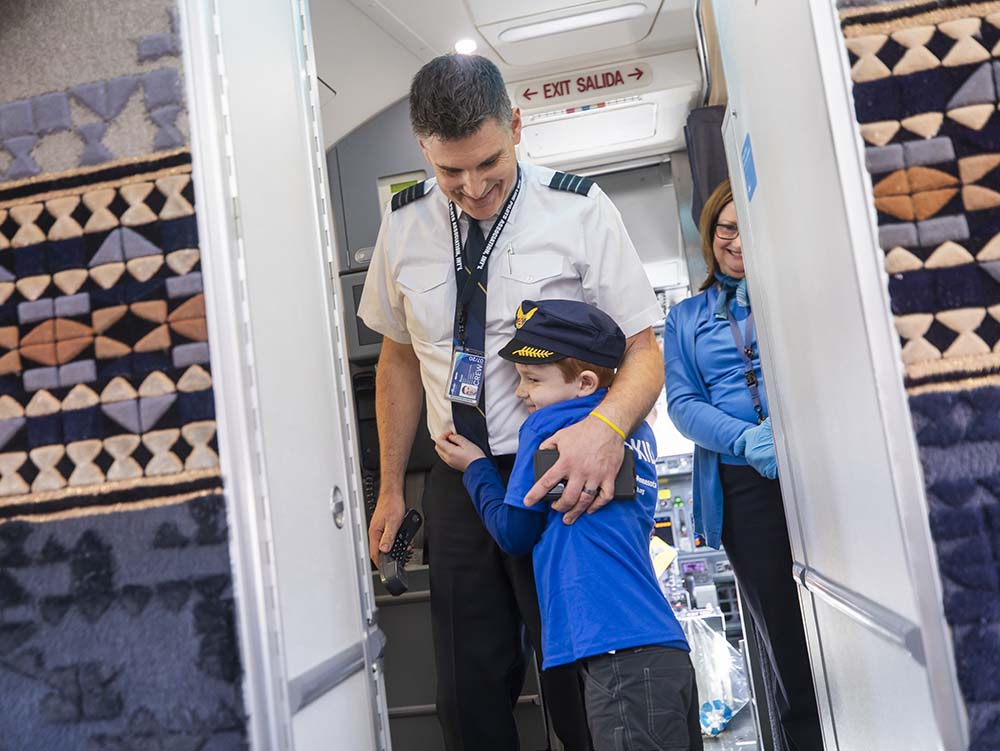 Haak went into remission and became stronger. The family was offered a dream trip to Hawaii to stay at the Aulani Disney Resort, thanks to the local Make-A-Wish foundation. As the family started to plan, Mohr wanted to make sure their flight was on Alaska Airlines. And maybe—just maybe—he and his brother-in-law Driggs, an Anchorage-based captain, could fly the plane?

Mohr wrote to CEO Brad Tilden with the plan, who put him in touch with Chief Pilot Scott Day and Base Chief Pilots Craig Huffman and Dave Mets who made it happen.

It was a dream come true after a year of hardship. As Haak and his brothers, Bodey (11) and Mavryk (10) and mom, Tory, piled into the flight deck with Mohr and Driggs for photos, onlookers were close to tears. The energy continued upon landing in Honolulu, as Contract Service Lead Kelsey Rollo and the local Hawaii chapter of Make-A-Wish greeted the family with welcome signs and flower leis.

Haak, wearing his mini pilot’s hat, had a smile pasted to his face as he high-fived well-wishers cheering in the terminal.

“He couldn’t wait to see tropical fish,” said Mohr. “We don’t have those in Minneapolis.” The fight’s not over. Haak’s type of cancer has a high relapse rate. But for now, he’s healthy. “He’s a survivor, at six-year’s old.”

Watch this video of Mohr’s onboard announcement: