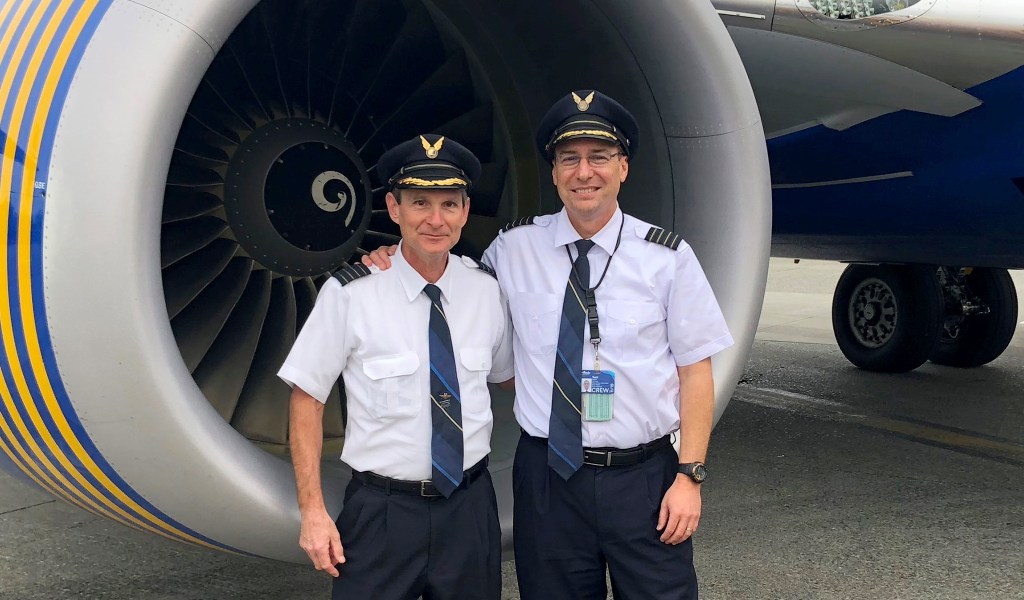 When Alaska Airlines Captain Chris Cice started chatting with a guest on a flight from Seattle to Oakland about 20 years ago, he had no idea that he’d inspire a new captain.

Fast forward to today: That guest – Todd Swenson – was promoted to captain at Alaska Airlines in February, fulfilling a dream that Cice helped him visualize.

It all started 20 years ago. Cice was a newly hired first officer with Alaska and was dead-heading in the main cabin from Seattle to Oakland. When Cice boarded the flight, he noticed a guest in his assigned seat. So he took the middle seat, next to a man in the window seat deeply ensconced in his book.

“I noticed that the man was reading a book by aviation author John Nance,” Cice said. “About halfway through the flight, my curiosity got the better of me and I asked him if he liked flying.”

The guest was Swenson. And that question from the friendly Alaska pilot changed the course of his life.

He figured he was too old

Swenson said, indeed, he loved flying. In fact, it was something he had considered earlier in his life, but figured he was too old now.

Cice, in learning that the young man was only in his late twenties, told him that wasn’t too old.

That led to a conversation that pretty much lasted the entire flight. Cice encouraged Swenson to follow his dreams.

The two exchanged phone numbers and a few months later Cice received a call from Swenson asking if he remembered him from the flight. Swenson told Cice that he was going to start classes on his pilot’s certificate.

Cice and Swenson kept in touch. Cice even joined Swenson on one of his flights, while on a layover in Oakland.

“I encouraged Todd to consider flying as a profession, if that was something he really wanted to do,” Cice said.

Swenson’s parents thought he was crazy and wanted to meet the guy who was encouraging their son’s career change. They met and shortly thereafter, Swenson quit his job and drove to Florida to start his aviation career. Cice accompanied him on the road trip.

Fast forward seven years, and with a recommendation letter from Cice, Swenson was hired as an Alaska first officer. At the end of training, Cice pinned Swenson’s wings on.

Nearly 12 years later, Swenson upgraded to captain. And yes, his mentor was with him sitting in the jump seat in the flight deck, along with check ride Captain Doug Burton.

The two today remain friends, even standing in as best man at each other’s weddings.

“I look back to almost 20 years ago sitting next to Todd and I would have never imagined that sitting next to someone and having a conversation could change the course of their life,” said Cice.