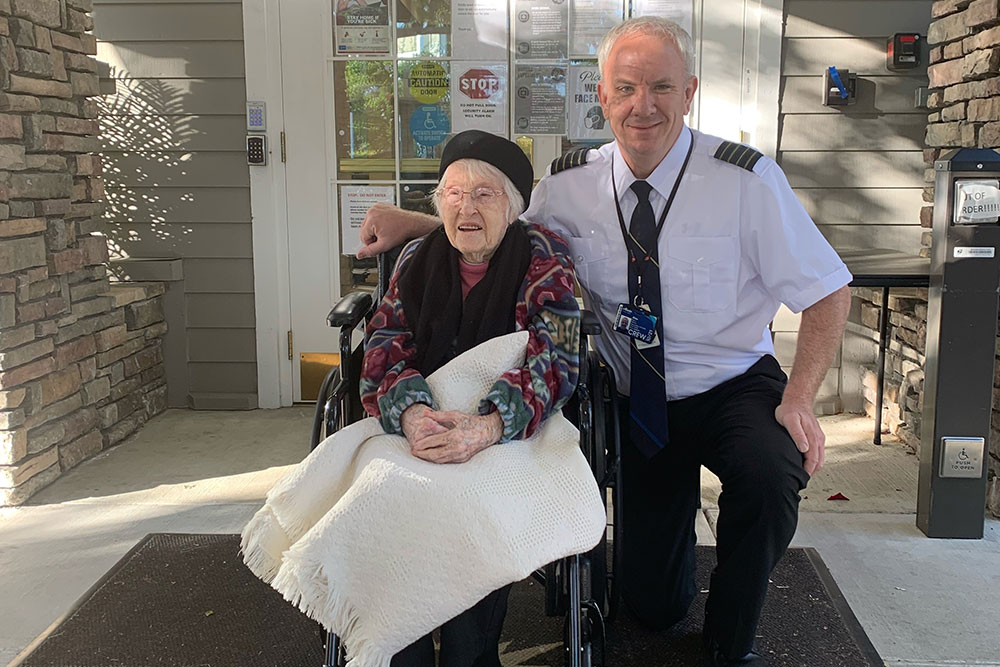 Captain Reburn with his Oma in Sacramento, California.

Sometimes our pilots have the pleasure of having a family member on their flights—a spouse, or maybe even their parents. It’s a special thing. But special doesn’t begin to describe how Capt. Alex Reburn felt a couple weeks ago when he was able to fly his 108-year-old grandmother, Loraine Showalter, from Sacramento to Seattle.

“Oma,” as she prefers to be called, hadn’t seen her grandson since the pandemic hit last year.

The flight was a long time coming for her. Living in a retirement home in California, she contracted COVID-19 and thankfully overcame the virus but spent months in isolation from her friends and family. This trip symbolized a new chapter for her and a fresh start, as it brought her closer to finding a new home in Lacey, Washington near family.

When Reburn learned that his grandmother would be moving to Washington, he immediately reached out to Alaska’s Chief Pilot Scott Day to see if he could possibly pilot her flight—and he did!

It’s not often that your airline pilot picks you up at your front door of your house, escorts you through security, helps you into your seat and flies your airplane too. But, that’s what Reburn did for his Oma. She was in First Class, a special treat after not being on an airplane for eight years and enjoyed every leg of the way.

Reburn said that the flight attendants, who had overheard there was an 108-year-old guest onboard, couldn’t believe it and initially walked past her not realizing she was the special guest. “They didn’t believe she was that old,” Reburn said.

Showalter was born in 1912, when William H. Taft was president—the same year as the Titanic’s fateful voyage. Growing up in Oklahoma, she and her sister used to ride their horses to school.  She attended university to become a teacher, but the war effort took precedence, and she found herself working in the Douglas Aircraft assembly plant in Tulsa, which built the B-24 “Liberator” bomber aircraft.

She worked in the back office of the plant doing badging and background checks. But nonetheless she was part of the unique generation of “Rosie the Riveters”–women who stepped up to work in factories producing aircraft, munitions and supplies as the men went overseas to fight. She also met her husband at the plant (Reburn’s grandfather, or Opa.) They were married for 55 years.

Showalter’s seen 20 U.S. presidents, survived several epidemics, including Polio, the Spanish flu, Smallpox and COVID. And she’s amassed a treasure trove of stories, which she shares with her grandchildren and great grandchildren.

She was a very active grandparent, always willing to jump in and join what we were doing,” Reburn said. “Some of my fondest memories are of visiting her in the summers back in Tulsa.” When he became a pilot, Reburn used to bid for Tulsa overnights to see Oma. She’d proudly take him around in his uniform to meet her friends in town.

And now, as a 20-year pilot, check airman and instructor, Reburn’s still shaking his head at the serendipity of it all.  “In my two decades in aviation I never would have imagined flying my 108-year-old grandmother,” Reburn said. “How do you top that?”