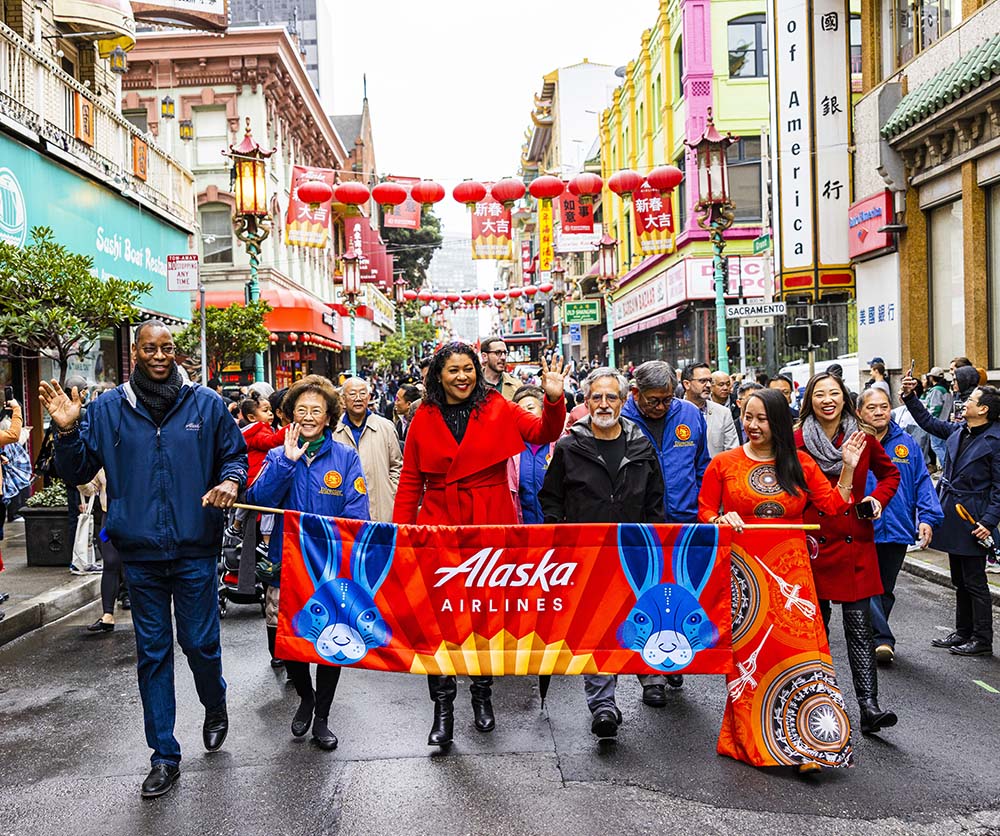 As the title sponsor of San Francisco’s Chinese New Year Parade & Festival, we’re proud to celebrate not only the year of the Rabbit but also the year of the Cat—and all the communities this holiday touches.

For MyHoa Tran and Esther Chan, the New Year means more than turning the page in a calendar. For their families, celebrating the first moon of the Lunar New Year can be a multi-day-long event that goes back generations. It means families getting together, renewal, fortune and delicious dishes steeped in tradition.

Tran and Chan, members of our Air Group Pan Asians (AGPA) business resource group (BRG), share what makes this time of year special for them and how even the name of the holiday differs based on where you are from.

While Lunar New Year is the general term for the start of the traditional lunisolar calendar, the holiday also has different names in specific cultures. People from Chinese culture call it Spring Festival, or Chūnjié, Koreans call the New Year Seollal, and Vietnamese refer to it as Tết.

In most Asian cultures that celebrate Lunar New Year, 2023 is the year of the Water Rabbit. However, Vietnam does not have the rabbit as part of their zodiac animals and instead celebrates the Year of the Cat.

Records analyst MyHoa Tran celebrates Tết from the first day of the first month of the Vietnamese lunar calendar until at least the third day.

It’s about family: “It’s important to me because it’s the only occasion for all family members to get together,” Tran said. “We set aside all the troubles and worries of the past year and hope for a better and happier upcoming year.” In addition to gathering to eat, people wear their best clothes and visit their relatives and neighbors, sharing gifts and special wishes. “The elderly receive wishes for health, the adults are wished fortune and success, and the young and children receive money envelopes,” Tran said.

Cleaning the house: Tết starts the month before with a ceremonial cleaning of the house from top to bottom, followed by decorating. “In the South, where I’m from, we use yellow apricot blossoms, which represent the spirit of Tết,” Tran said. “We also use marigolds-symbolizing longevity, chrysanthemums, cockscombs and paperwhites.”

On New Year’s Eve Day, the whole family gathers to prepare the traditional bánh tét, a savory-sweet rice cake, which takes about 24 hours to cook. “Everyone in the house has a job to do–be it the banana leaves, rice, cooking the meat (pork belly) or rolling and packing the cakes.

Ringing in Lunar New Year with loved ones

For software engineer Esther Chan, who hails from Mainland China and Hong Kong, being with family and friends is important.

Red Pockets: At Lunar New Year, it’s tradition to give the gift of a bright red pocket (envelope). They are filled with money and symbolize good wishes and fortune for the year ahead. “When I was a kid, I was most excited about getting red pockets from grandparents, parents, uncles and aunties,” Chan said. Other symbols are the New Year’s Eve firecrackers and red New Year scroll.

Why it’s special: “To me, spending time with family and friends is the most important thing during the Lunar New Year holidays,” Chan said. “I have many great memories during the breaks and miss celebrating it with my family back in Hong Kong.”

What not to do: “Certain things are taboo during Lunar New Year—such as swearing or quarreling, getting your hair cut (because hair means ‘become rich’ and you don’t want to cut that), wearing white or black clothing (red or gold is lucky), and saying the number four (which can mean death),” said Chan.