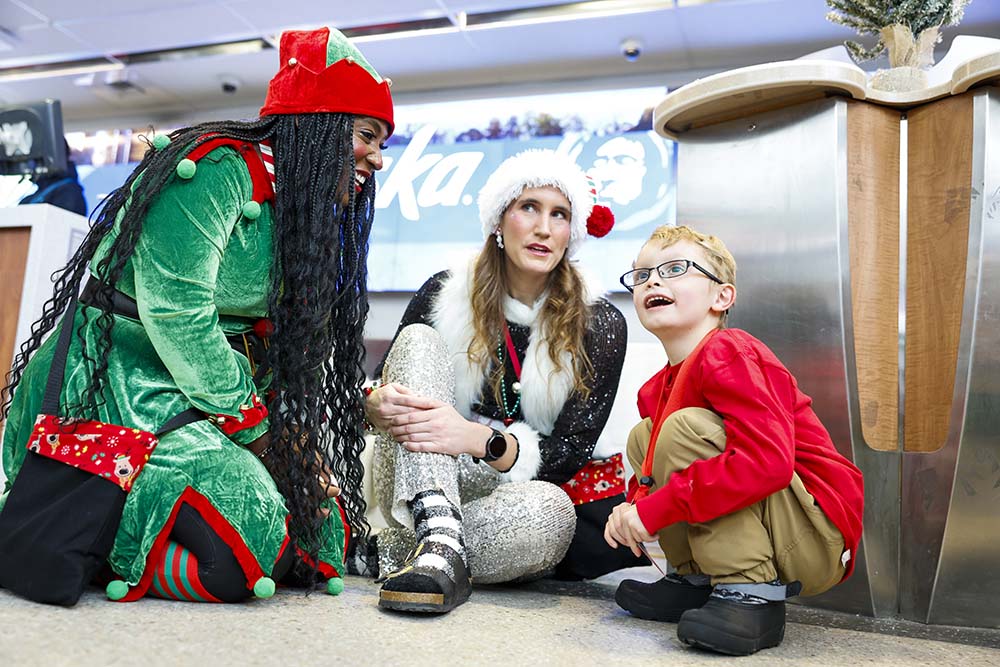 Alaska Airlines hosted Fantasy Flight for the 15th year on Saturday in Spokane, Wash. This is the 26th year of flying to the North Pole, made possible by airlines like Alaska and Northwest Pole Adventures and incredible volunteers, sponsors and donors. Photos by Joe Nicholson.

We only get so many opportunities in life to truly believe in magic.

This weekend, Alaska Airlines made us all believers! On Saturday, I suited up in my best elf attire to visit the “North Pole” on Alaska’s “Fantasy Flight,” which was filled with Santa’s helpers (like me) and more than 50 kids from local communities.

Before stepping foot in the Spokane Airport, I had no idea what to expect. As other volunteers added finishing touches to their hair and makeup, adjusting their badges with names like Jet, Aqua, Flash, Juggles, and Shorty, I overheard how life-changing this day is for so many people.

Although I couldn’t begin to imagine how it would affect me, I personally know how these moments can impact a child. As a kid born into the system and aged out of foster care, acts of kindness like this gave me hope during the holidays. They made me feel remembered and showed me a tiny glimpse of what I deserved from life, despite my circumstances.

As I walked around the gate, meeting everyone, signing special North Pole passports, and playing games, I met McKayla, a 7-year-old, big brown-eyed first-timer to the North Pole. We danced and laughed as she shared her love for gymnastics and her excitement about going to the North Pole with me and Tinsel Bell, her assigned elf. She’s always wanted to meet Santa and looked forward to getting on the big plane wrapped with a bow.

One of Alaska’s most senior flight attendants, Carole S, welcomed everyone on board. She has never missed a Fantasy Flight—rumor has it, she even extended her 55-year career with the airline to take one final trip for its 15th-year milestone. She was so warm and kind, along with the rest of the crew who calmed any nervous flyers with special snowballs and goodies throughout the flight.

Elves led in holiday songs, started snowball fights and constantly updated everyone on the position of Santa’s Sleigh as we navigated our way to the North Pole. When we landed and the doors flung open, we were greeted by a parade of elves, cheering and high-fiving, lining the walkway to a private hangar, a.k.a. ‘the North Pole.’

Kids jumped up and down, and the little girl in me squealed too! At that moment, I felt a little tap on the back of my arm. I turned around to see McKayla; she said,  “I found you, I was looking for you the entire flight. We made it to the North Pole!” I high-fived her and said, “I was looking for you too, we made it!” At that moment I cried, I remembered my own journey to “the North Poles,” and I understood how magical that moment must have been for her.

Fantasy Flight means so much more than serving underprivileged kids and giving them a day of sugary snacks and gifts from Santa. It is a moment when kids who are often overlooked get a chance to be the focus of attention and experience what it means to have a moment in time to be celebrated simply for existing.

Shortly after arriving, Mrs. Claus met the children to ask if they knew why they had been invited to the North Pole. The kids looked around to see if anyone had the answer; she said that when she and Santa looked out over the night sky, they were the brightest stars of all. She said they had to get them to the North Pole to tell the kids just how special they were.

Each child had a moment with Mrs. Claus before meeting Santa. I found myself in tears (again) as I watched her speak with them. She was so present and connected; I could imagine what it felt like for them to have that special one-on-one time with so much happening around them. It was a tender moment I’ll never forget.

When it was time for McKayla to meet Santa, she asked both Tinsel Bell and I to join her. She found her name written boldly on the last page in Santa’s book. Moments later, the curtain was pulled back and she ran to greet him sitting atop his sleigh.

After telling Santa what she hoped to get for Christmas, he called her back to let her know he had something special for her. An elf pulled out an oversized sleigh bag, bigger than her, filled with toys handpicked with her in mind.

I followed McKayla and Tinsel Bell back into the workshop, where she began sorting the gifts in her bag. With each toy she pulled out, she gasped and yelled, “I always wanted one of these!” I cried watching her, remembering hopes and dreams in my own life and moments when they came to be. She looked at me and said, “you’re getting emotional. Why?” I told her I was just so happy that she got to meet Santa so he could see how special she was.

The night wrapped with everyone gathered around the fireplace as Santa and Mrs. Claus read aloud “The Polar Express” (one of my favorites). Each child was given a blanket and pillow to match their cozy jammies and their own copy of the book. At the end of the story, Mrs. Claus reminded us that magic will always exist as long as we believe, and each child was handed a special bell, like the boy in the story.

As I prepared to say goodbye to McKayla, I signed her passport booklet one more time with a special note, letting her know that she was the best part of my day. As I gave it back to her, she ripped her picture out of it, handed it to Tinsel Bell, then took her personal key to the North Pole and put it around my neck. She said, “I want you guys to have these to remember me. You were my most favorite part of this day.” I cried, again.

I hugged McKayla and told her never to forget the magic that lives within her — today was just a preview of all of the special moments that belonged to her. I told her to always look for the good things and believe that she is worthy and deserving of them and that I would always be thinking of her here at the North Pole until we found each other again.

We headed into the “Magic Transporter,” filled with fog and lights to sing one final chant that landed us back in Spokane, where an SUV-stretch limo was waiting to take McKayla and the other children safely back home. As we walked McKayla out, she blew kisses and waved until the doors shut and we stuck around to catch them all. Once she was gone, Tinsel Bell and I burst into tears, so thankful for what we had just experienced together. Filled with so many emotions, we walked back into the North Pole and hugged other elves to reminisce on what we had just witnessed.

At the beginning of the day, I couldn’t quite understand what made this flight so unique, but by the end, I fully understood. A little bit of magic exists in all of us. We just need to make space for it and to remember anything’s possible. Fantasy Flight helped me remember the power of magic and how acts of kindness, big or small, can be the best gift of all.