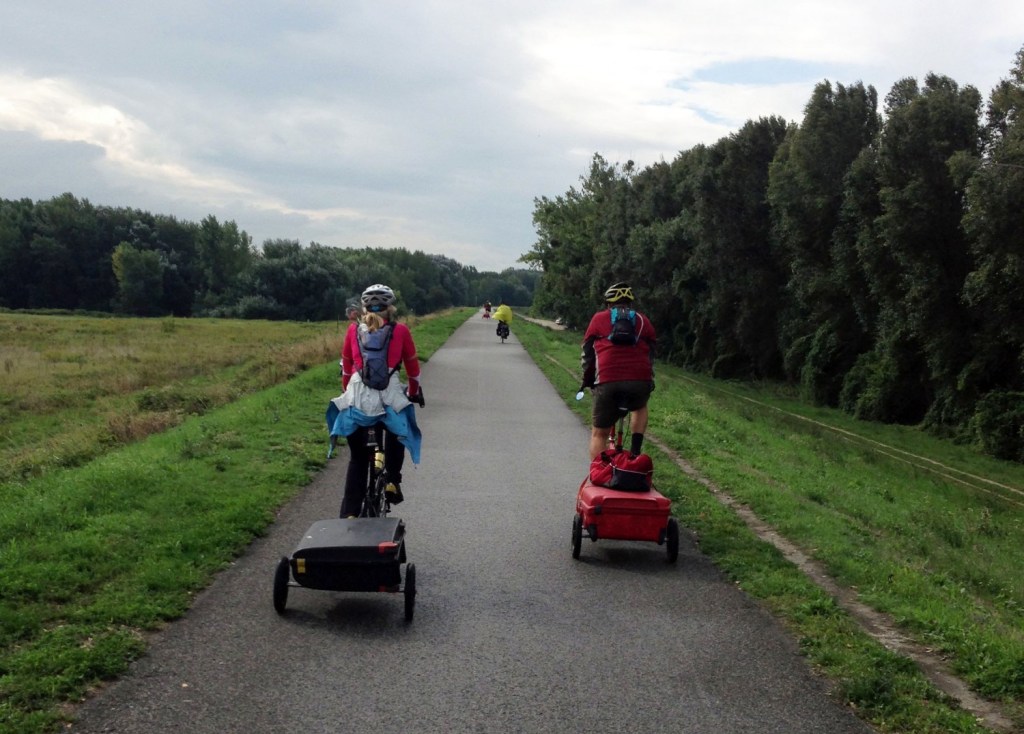 Riding through eastern Europe is scenic but local customs and laws are not always tourist-friendly.

While we all look forward to time away from work when we can relax on peaceful beaches, enjoy local cuisine, hike pristine trails or shop in local open markets, anyone who has traveled much knows things don’t always go as planned.

There are the run-of-the-mill mishaps, such as forgetting your swimsuit on a beach vacation, missing a flight or a reservation mix-up. For the most part, those minor inconveniences are easy to recover from (you have a back-up plan for that missed flight, right?), but other misadventures qualify as travel disasters and require a little more effort to set right.

If you are paying thousands of dollars for a packaged tour or a cruise, a serious incident is less likely. But for independent travelers, all bets are off. And that’s why their travel stories are usually a lot more fun to hear. Ever heard the expression tragedy + time = comedy?

I experienced this first-hand a couple of years ago while on a bike trip through Eastern Europe.

I was riding behind two of my friends through a village in Croatia when a car made a right turn directly into my friend Sandie. She bounced off the hood onto the ground, but fortunately was not seriously hurt. The woman riding directly behind Sandie was not so lucky. She slammed on her brakes so hard that she also fell and broke her wrist.

The driver, a young woman, admitted she was at fault and apologized profusely.

The police came and the one officer who spoke English took statements from all involved, and my friends were taken to a nearby hospital while we gathered up their belongings and waited. And waited. At one point, I was asked to go to the police station where I gave my witness statement again.

In the meantime, my friends were released from the hospital and told they would need to stop by the police station to give a statement before we could leave town and head into Serbia.

That’s when things started to go sideways. After taking a taxi to the police station, their passports were taken and they were placed in a jail cell.

They were held for hours with scant information before being told they had been charged with reckless driving (on a bike!) and would have to stay in jail overnight as the judge was not available.

At this point, using Google translate, my friends frantically tried to negotiate their release. They asked if they could plead guilty to whatever bogus charges were being thrown at them and pay the fine. This was acceptable to the authorities and they paid about 200 euro each and were finally allowed to leave. Whether this was actually a fine or just a bribe is unclear.

Amazingly, their taxi driver and a passenger, concerned about their welfare, were still waiting for them outside the police station during the whole ordeal and drove them across the border into Serbia to the hotel we had booked.

It was quite an ordeal, but Sandie never tires of telling of the time she spent in a Croatian jail.

While this is a more extreme version of things that can go wrong, Alaska Airlines employees shared some more common experiences and offered up some ideas of how to avert or deal with them.

This is one of my biggest worries, especially when traveling solo. It’s also unfortunately common, especially in countries where pickpocketing or theft is a big problem. These days, losing a smart phone can be just as disastrous as losing a wallet, especially if you are using it to store reservation information and as your primary camera.

Leah Foster, an inflight instructor for Alaska’s sister carrier Horizon Air, had just such a thing happen to her when she was traveling in Southeast Asia about five years ago. She was three weeks into a two-month-long trip and she and a friend had fallen asleep on a bus with their bags under their seat. When they arrived at their destination, they realized everything of value had been stolen.

“My wallet and everything in it, everything in my friend’s wallet except two credit cards, our Rx sunglasses, iPods, cameras – everything. They left us our passports and two cards,” she wrote.

Foster said they were initially distraught and didn’t know how they would continue their trip, but one precaution she had taken saved them. When purchasing her airline tickets, she also purchased travel insurance.

“It turns out it covered us for the whole trip. We had to file a police report (which is a joke in Vietnam) but when we returned home, we were reimbursed for everything except the sunglasses and the cash in our wallets,” she said.

One of the cards the thieves had left was for a joint account the pair had set up to cover their travel expenses. They were able to transfer money from other accounts into the untouched account to keep them going.

Foster said she is grateful for the lesson and it made her a better traveler.

Preventive tactics: Don’t carry these items if you are just day-touring and can leave them secured somewhere. Or carry them in a money belt close to your body. Keep photocopies of everything in a separate location. I also have an app on my phone called St@sh, which is a password protected place where I have photos of all travel documents and credit cards. Of course, that is useful only if you haven’t lost your phone. Have more than one way of getting money and store them in different places.

Ask for help: If you’re in a country where little English is spoken, enlist the help of a local English speaker to assist you in making phone calls or explaining the situation to officials. Try your hotelier, AirBnB host or the local tourist office.

Replace your passport: If you lose your passport, you have no other option than to get to the closest embassy and apply for a temporary travel passport. How long this will take depends greatly on the country you are in and what day it is. Most embassies are closed on weekends. It may help expedite the process if you have a photocopy of your passport.

A replacement passport costs $140 and can generally be issued within a few days, or faster if you make a good case that you need it right away, according to travel expert Rick Steves.

If you don’t have the funds, the embassy will help you contact someone at home who can wire money directly to the embassy. If no one can wire the money, the embassy staff may waive the fee or give you a “repatriation loan” — just enough funds to cover the new passport and get you back home.

Report any loss to the local police. Having a police report may help with replacing your passport and credit cards. The police may also be able to direct you to a local travelers’ aid office. Many banks offer emergency cash advances via wire transfer to tide you over until a new card arrives, which generally takes five to seven days.

No ID when traveling domestically: You can fly domestically without an official government ID. The Transportation Security Administration officers will take you aside to question you and may ask to see other proof of who you are, but it’s not a deal breaker.

Lost or stolen cell phone: If you have a mobile security app, the first thing you should do is try to locate, lock and, if you are positive your device is gone for good, remotely wipe it to ensure that your important information doesn’t fall into the wrong hands. Hopefully, you have backed up your photos (or posted them somewhere) so they won’t be gone.

More tips: Rick Steves has a page on his website where you can learn about current scams in European countries. [/showhide]

I have one important piece of advice about renting a car. Use your Visa or other credit card that has rental car damage coverage. I once put a ding in a Toyota Prius in Victoria, Canada. The “ding” cost $2,000 to repair. Even though I hadn’t paid for the extra insurance, Visa paid for the whole thing with minimal hassle. I simply had to fax them the report and other rental documents and it was covered.

Michael Schendel, an Alaska Airlines IT analyst, also recommends getting the “local” insurance coverage when traveling internationally. He was driving in South Africa, where most roads are single lane and crammed with cars, trucks, animals and people, when someone rear-ended him. Schendel was still able to drive the car to the nearest car rental office, where they gave him a new car, but he was held responsible for $1,000 of the damages since he didn’t have full coverage.

“What I found out was, when you book a rental car outside the U.S., they give you the U.S. customer rate and insurance. But what you want to do when you pick up your car is get the ‘local’ rate and insurance policy as it has no deductible and covers everything and is actually much cheaper,” he said.

Employee Razel Mella was traveling standby once when her bag got on a plane, but she did not. She had to stay overnight to catch an early flight with nothing but her purse.

“So what I’ve learned from that experience: always carry a toothbrush, change of underwear, and a spare shirt on you,” she said. “Even if you lose your luggage, feeling clean and decent can make a huge difference in lessening travel stress.”

Usually when we think of lost luggage, it’s from an airplane trip, but a friend recently almost lost a bag when we were trying to unload gear off a train in Italy and the train door closed right after my friend had placed his bag with valuables on the train platform. It was a sleepy little station so he was able to get back to it in time.

Lesson learned: Don’t ever place a bag on the platform unless you are still attached to it or someone is holding the door.

Rowena Monillas, an Alaska employee, had a similar mishap while traveling in Bolivia. She bought a ticket at a bus station in La Paz, loaded her luggage and went to use the bathroom as she had been told she had 20 minutes. When she returned in 5 minutes, the bus was gone with her luggage. Fortunately, she was able to run down the bus, which had been stuck in traffic.

You’re probably not planning to break the law during your travels, but as we found out in Croatia, laws in other countries are often quite different from those in the U.S., and may not always be applied fairly, especially to tourists. Ever seen the show “Locked Up Abroad?”

Do some research on your destination prior to your travels, paying close attention to cultural norms, crime stats and criminal penalties. Be particularly cognizant of unfamiliar practices, the current political environment, and other risks that could lead to legal problems.

If you get sick or injured in a foreign country, how well you do will depend greatly on the country’s health care system. In many European countries with socialized medicine, the care may actually be cheaper than at home.

If you become seriously ill or injured abroad, a consular officer from the U.S. embassy or consulate can help locate medical services and inform your family or friends, according to the state department website. The embassy can also help in the transfer of funds to pay for services, but the expense is still your responsibility.