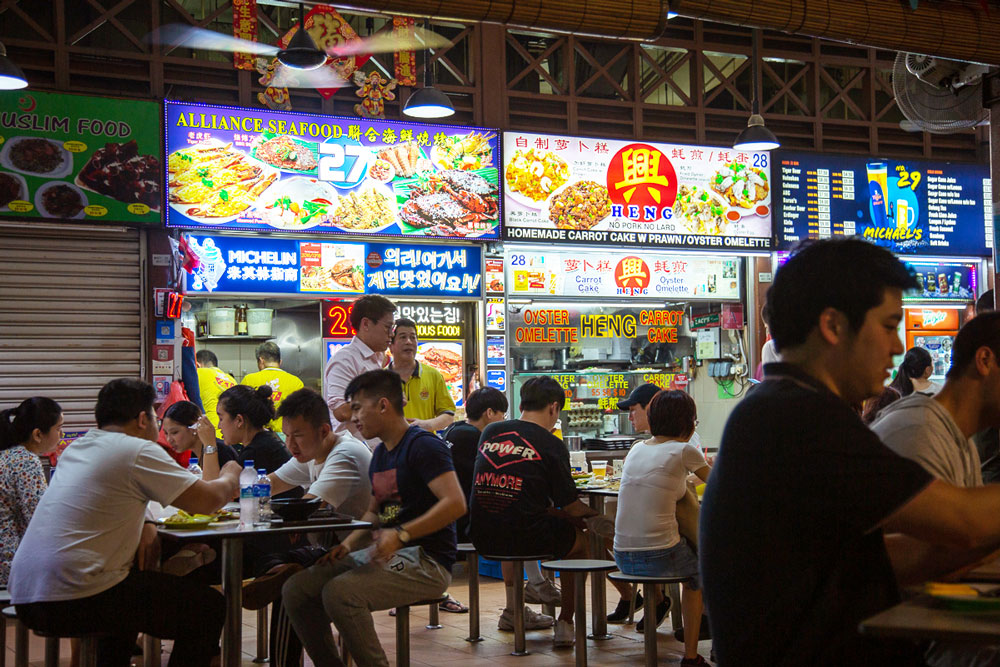 No matter how big the economy booms or how bright the space-age skyline glows, Singapore will always define its culture by food first – especially hawker food. Born from the streets as a fresh, cheap and diverse dining scene, hawker fare proves this city-state to be Asia’s great melting pot.

Every stall – and there are thousands – has its own story: the couple churning out the same fish head soup for four decades, or the hipster putting a new spin on ramen or burgers. Which one is the best is up for debate, but the scene itself unites the city. Singapore recently nominated hawker food for Unesco’s “intangible cultural heritage” status. If successful, it would be Singapore’s first – and the only edible inclusion in Unesco’s list for Southeast Asia.

Singapore is an easy destination via Alaska’s partner airlines, including Singapore Airlines, which offers nonstop flights from Los Angeles, San Francisco, Houston, New York and – as of this fall – Seattle. You can also earn and redeem Alaska Airlines Mileage Plan miles on flights with Singapore Airlines.

Once you reach the island city-state in Southeast Asia, to find the heart of Singapore, start with your stomach: Go to one of more than 100 hawker centers – where locals eat, lounge with cups of pulled tea over newspapers or meet for cold beers and an afternoon snack. This guide gets you started.

What is ‘Hawker Food’?

Hawker food’s origins spun from street vendors in the 1800s. Fussy British colonials soon limited their number due to perceived hygiene issues. After independence in 1965, the Singapore government moved the 24,000 vendors off the streets and into organized “hawker centers,” which are often two-floor, open-wall modest buildings housing fresh-produce markets side-by-side with stalls preparing regional dishes.

With a group, you can enjoy a transnational banquet by sharing a half-dozen or more dishes in one meal, starting at a couple of dollars each.

You should eat as many hawker dishes as you can, but don’t leave until you at least try Singapore’s three most iconic offerings.

Even if you are so-so on chicken and rice, you will love this. Stop at any stall with hanging chickens in the window and queue up. Brought generations ago by Chinese immigrants from Hainan island, it’s become an obsessively loved “national dish” of Singapore – a succulent serving of boiled chicken with white rice sautéed with garlic and boiled in chicken broth, then served with chili, soy sauce and ginger.

Singapore is rightfully proud of this dish because it’s great and it’s homegrown (though Malaysia sometimes begs to differ). The story goes that in the 1950s, a local couple subbed chili paste for ketchup at their stall – and Singapore’s chili crab was born. It’s a hot mess of a meal, made of stir-fried mud crabs soaked in thick, sweet tomato-chili sauce. You eat it with gloves, then dip freshly baked, slightly sweet mantou bread rolls to soak up the delicious sauce.

This common breakfast or afternoon snack is a Singapore-Malay tradition packing a delicious punch that defies its modest appearance. It often comes as a combo deal (for about S$2.50, or US$1.85), with a cup of pulled milk tea (teh tarik) and a saucer of soft-boiled eggs doused in soya sauce and pepper to dip your toast into. The star here is the kaya, a light green coconut-and-egg jam. A jar makes for a good souvenir to take home.

With more than 100 centers in Singapore, there’s surely one near you. Some are old-school affairs with crowded aisles and lively wet markets. Others have gone hip, like Timbre+ with fusion food, graffiti art and live music.

Here are a few standouts near popular attractions:

Marina Bay: Downtown’s beloved Amoy Street Food Centre (at the corner of Amoy and Telok Ayer Streets) is on a leafy street about four blocks away.

Little India: Tekka Centre is below a housing tower next to the Little India MRT station at Serangoon Road, where you can shop for saris and visit Hindu temples.

Orchard Road: Lucky Food Centre is on the shopping mecca of Orchard Road, but it’s better to go a mile-and-a-half northwest to the famous Newton Food Centre (next to the Newton MRT station).

Kampong Glam: The breezy Golden Mile hawker center is a few blocks from the Masjid Sultan mosque and boutique scene of Haji Lane.

Changi Airport: The new Jewel terminal has an excellent food court on its L2 level, which includes locations for many iconic Singapore eateries.

Also check out the Malay-style fried mackerel or chicken called nasi lemak at Changi Village Food Centre, near the boat service to Pulau Ubin Island, or the Malay Hawker Centre (aka Geylang Serai) in the historic Malay neighborhood halfway between the center and the airport. It’s housed in a traditional-styled longhouse, with a market downstairs and food stalls upstairs.

While hawker centers are open daily, individual stalls keep their own hours and days off. Some don’t open until afternoon, while others close then. Depending on what you want, consider visiting around 10 a.m. or 3 p.m. to miss the busy mornings and lunch periods. Every stall is numbered (#1-10 means tenth stall on the first floor), and many appear on Google Maps too.

If you don’t know what you want, roam through all the aisles to see what stands out (or smells the best), and – this is key – where the lines are. Though some stalls will have no line, it’s sometimes fun to join a smaller line (say 10 to 15 people). The food’s sure to be good and it shouldn’t take more than 15 minutes to get through. (Some busy stalls cook to order, so it can take 10 or more additional minutes after you’ve placed your order.)

Read blogs by local foodies, such as Seth Liu and Miss Tam Chiak to get more ideas.

Oh, and when you’re done, as the many signs tell you, be sure to clean your tables!

You can find good food at any hawker center. Still, some centers are truly classics and should not be missed. Here are five standouts (and recommended specialties at each) from the dozen visited researching this article.

Anthony Bourdain swore that any trip to Singapore should start with hawker food at this center near Chinatown. Specifically, Maxwell’s Tian Tian Hainanese Chicken Rice (#1-10/11). Almost any time of day, you’ll find a line wrapping around the corner. Get in it. For S$5 you’ll have the meal of your trip.

Have your own taste-test. It’s win-win.

At the south end of Telok Ayer Street – a fun central street to stroll for its historic temples, mosques and cool eateries – you’ll find the Amoy Street Food Centre. With its mural-backed tables, it’s one of the most revered centers in the city.

Four stalls make Michelin’s “Bib Gourmand” list – for high quality at low cost – including A Noodle Story (#01-39), which keeps separate lunch and dinner hours (closed Sunday). The busy duo makes only “Singapore-style ramen” – 200 bowls a day – for S$7 (US$5.10) and S$9 (US$6.60). Its distinction comes from adding wontons, a soy-flavored egg, a potato-wrapped prawn and char siu barbecue pork.

If you can’t wait, Ah Tea Teochew Fishball Noodles (#01-14) is revered for its mee noodles served with fishball, prawn, minced pork and homemade chili sauce. Bowls comes in three sizes, starting at S$4 (US$2.90), and is served by – as blogger Miss Tam Chiak calls him – the “hawker hunk,” a second-generation chef who once won “most handsome hawker.” The stall also opened a nearby restaurant last year.

Locals have mixed feelings about the flashiest hawker center, often calling it overpriced and overly touristy. Don’t listen. Locals also go in droves. (And it was the first Singapore stop in the film “Crazy Rich Asians,” called out with brags about how local food stalls win Michelin stars.)

Built in 1971, Newton is a horseshoe-shaped complex that deliberately draws style inspiration from nearby colonial-era terrace homes. Stalls arc around a courtyard filled with umbrella-shaped tables, palms and 50-some flower species.

Alliance Seafood (#01-27, closed Wednesdays) is on Michelin’s Big Gourmand list, and famed for its chili crab. It’s priced seasonally, most recently S$40, or US$29, for a giant platter – much less than the S$90, or US$66, price you would pay downtown.

Next door is another Michelin-lister Heng Carrot Cake (#01-28, open after 5 p.m.), which serves a beloved late-night snack: carrot cake (or chai tow kway). Despite its name, it’s made with no carrot and isn’t cake. It’s not even dessert. The tasty Chinese import is made from steamed rice flour and radish, which is fried with garlic and eggs. It comes in black and white styles; best – to our taste – is the former, colored by dark soya sauce.

Now for something old-school. Named for a road that went to Singapore’s first (now closed) airport, this hawker center serves a residential area about 4 miles east of the center. Old Airport Road Food Centre has more than 150 stalls and – despite the lines for some – offers an easygoing spirit away from the biggest city attractions, making it a perfect place to visit a few stalls and assemble a random banquet.

For a shorter line, with equal fanfare, try Ru Ji Mee Noodles (#01-37, open breakfast and lunch, closed Monday), where a couple cooks up a spiced mee pok. It’s quite a deal: a dry bowl of spiced thick egg noodles and a separate bowl of juicy fishballs and sliced fishcakes for S$3 (US$2.20).

To get here, take the MRT to Mountbatten, then walk under the shaded sidewalks a couple of blocks east. It’s confusing, but keep going past the smaller Kallang hawker center.

Midway down the lush 10 miles of East Coast Park on the coast facing offshore ships, this hawker center is a local institution, where the smoke of satay grills mingles with the sea breeze in the palms.

The food gets going after 5 p.m. and is busiest on weekends when locals pack in to enjoy live music with their grilled seafood, lamb or chicken – and perhaps a cold beer or two. Vendors will certainly find you (touting is accepted here, unlike other hawker centers). Haron Satay (#01-55) is one of the most popular, serving local favorites for more than four decades.

Ten skewers of mutton run about S$7 (US$5.10), but consider the Malay-styled stingray grilled and served in a heavenly sambal sauce, made of chili peppers, shrimp paste, fish sauce, garlic and lime juice. A plate runs about S$12 (US$8.80).

There are a lot of activities in the park – barbecue picnics by the sand, volleyball and cricket games, a handful of restaurants and playgrounds, a wakeboard park next the hawker center – all looking toward the sea.

Explore how you can earn and redeem miles on trips to Singapore and other destinations in Asia by flying on Alaska Global Partner airlines.

Planning your first trip to Singapore? Check out our beginner’s guide.