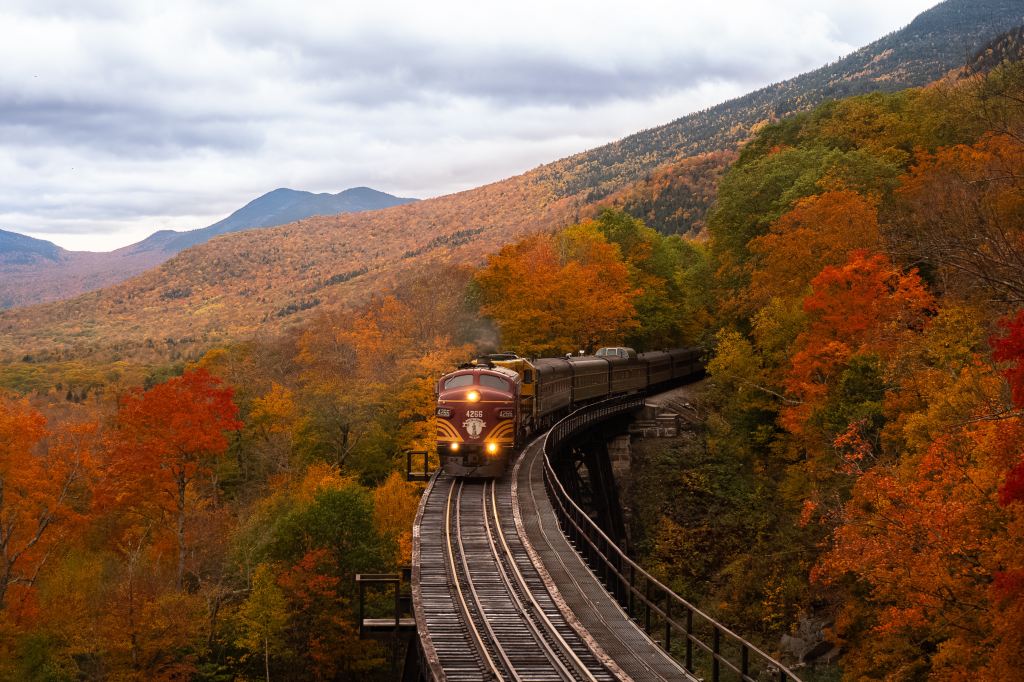 Born and raised in New England, I’ve been surrounded by the most picturesque places during fall at its peak. Luckily for travelers, Alaska Airlines flies directly to/from Boston and New York from various west coast cities such as Los Angeles, Portland, San Francisco and Seattle. From there, the best leaf peeping spots are within reach.

‘Leaf peeping’ is another way to say you’re looking for the best changing of colors in autumn, I swear it’s a thing. Here’s when and where you should go from Boston or New York to leaf peep New England.

Connecticut, being the southernmost state, gives leaf peepers a chance to hang on to fall a little longer than most states in New England, well into November.

If you’re looking to sit back and relax, the Essex Steam Train can take you from Essex to Chester along the Connecticut River while capturing the most spectacular fall views. When you’re ready to head back, you can choose another scenic route by riverboat.

Maine’s nickname, “Vacationland,” is an understatement. From the mountains to the lakes and coastline, there’s plenty of jaw-dropping fall sceneries to see, especially at Acadia National Park. 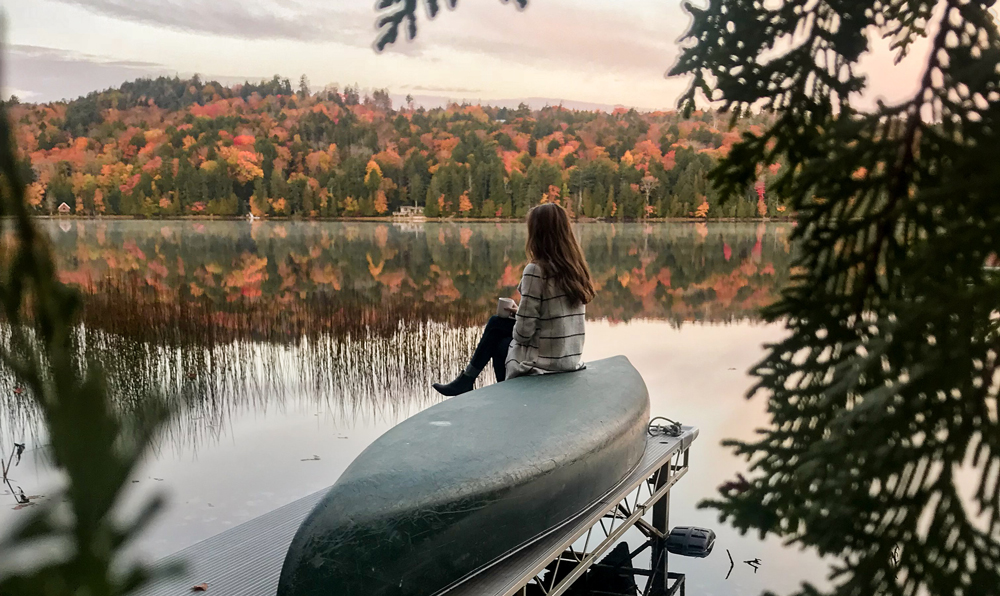 For other great glimpses of foliage, I suggest driving Park Loop Road. You’ll see some of the most beautiful spots along the coast and eventually get to Bar Harbor, a coastal town serving up views and legendary lobster.

Acadia National Park is about 4.5 hours north of Boston—the drive up the coast of Maine is worth it, trust me. Best peeping times typically begin mid-September and lasts until mid-October.

Massachusetts has many great sights to see, from the city of Boston to the Berkshires, a rural region in the western part of the state. The Berkshires are full of mountains, lakes and cozy downtowns like Great Barrington, Pittsfield, or North Adams, creating the perfect fall atmosphere. Each town is close enough to enjoy during a weekend trip. 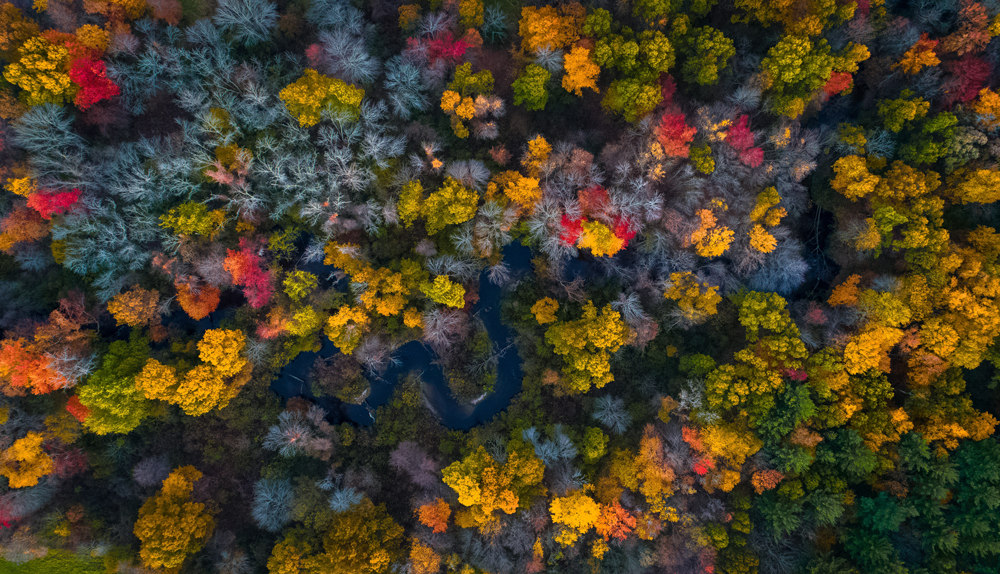 Looking for the best view? Take a drive up the state’s tallest mountain, Mount Greylock – you won’t be disappointed by the views along the auto road from mid-September to around mid-to-late October. My advice, on the journey west from Boston, stop for drinks and lunch in Northampton, another historic locale.

You’ll need a car to reach most of the locations listed. By using Alaska Airlines Cars, powered by CarTrawler, you can find the best price on car rentals while boosting your Mileage Plan for future trips. Learn how to book your entire trip using Alaska miles.

My favorite leaf peeping spot? The Kancamagus Highway hands down. The 34-mile road links North Conway and Lincoln, two classic mountain towns with great shops and restaurants. There are many designated pull-offs where you can safely stop to admire the colors.

If you’re planning a trip to the Granite State before late October, the Mount Washington Auto Road is an absolute must. It’s an 8-mile drive that leads you to pure beauty at the summit of Mount Washington, the highest peak in New England. The drive is about an hour roundtrip and takes you from an altitude of 1,527 feet to 6,145 feet – roughly 4,618 feet from the starting point.

If the Auto Road is closed for the season, Crawford Notch State Park is another incredible spot to experience fall in New Hampshire that will make you feel like you’re in a movie.

North Conway is about 2.5 hours north of Boston.

It may be the smallest state in the country, but visiting Rhode Island’s coastline is a big deal. In the fall, especially, oceanfront towns like Newport become prime locations to see the season’s change.

My advice: Pack up the car and head down Ocean Drive to see the leaves, ocean and historic mansions from the late 19th century. Need some snacks for the road? Stop by Sweet Berry Farm in nearby Middletown; they have pumpkin patches and apple cider doughnuts galore, a New England staple in the fall.

Newport is only 1.5 hours south of Boston.

Before Vermont turns into a winter wonderland for skiers, nearly the entire state changes color. While Burlington, a vibrant, small city located along the shoreline of Lake Champlain, is an obvious choice for leaf peeping, Stowe is a quaint mountain town nearby with no shortage of fall activities. If the leaves leave you wanting to satisfy your sweet tooth, the original Ben & Jerry’s ice cream factory is less than 15 minutes from Stowe.

Woodstock is another excellent spot to have an authentic New England fall experience. You’ll find shops selling every maple-flavored thing you can think of and farm-to-table restaurants.

Trees across the region start turning from a luscious green to a fiery mix of yellow, orange and red starting in mid-September through the first two to three weeks in October and vary by elevation, progressing from north to south.

Woodstock is about two hours northwest of Boston, while Burlington and Stowe are an additional hour north. 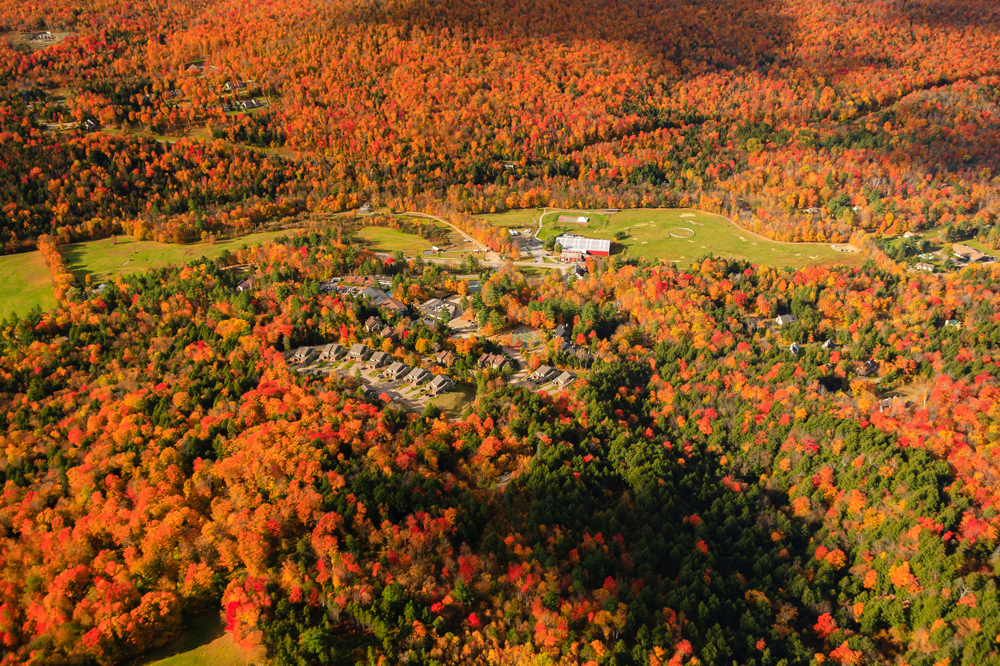 Don’t miss out on leaf peeping this year, book your flight today!