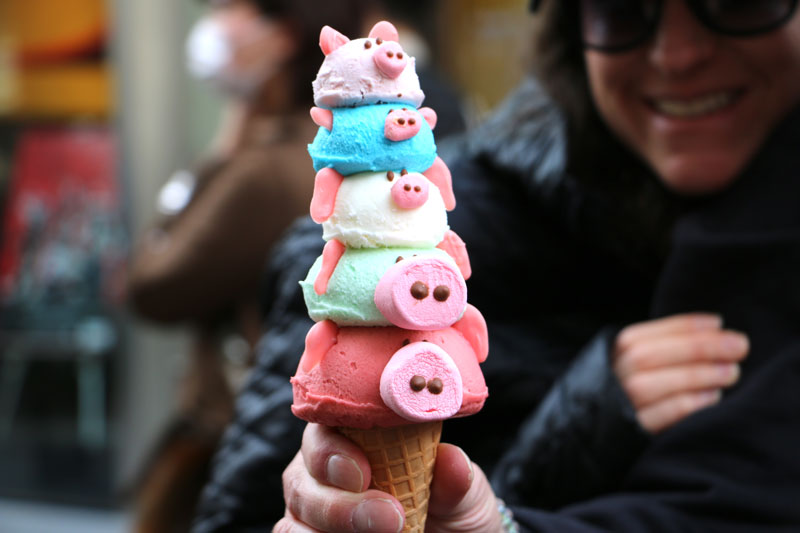 In Tokyo, ice cream can be shaped like adorable animals, from bunnies to pigs. (Photos by Laura Begley Bloom)

When most people think about food in Japan, sushi and tempura come to mind. But in Tokyo, the crazier and more adventurous, the better. Consider one of the latest obsessions: chicken sashimi. You heard that right. And raw chicken is only the start of what you can eat in this trailblazing city known for defining global trends when it comes to everything from fashion to food.

“Would you try a live shrimp?” my guide Asami asked me with a wink. “It’ll still be alive — and wiggling — when you eat it.” And with that, I knew I was embarking on one of the wildest culinary explorations that I’ve ever had.

Asami is a guide with Arigato Japan Food Tours, a company that introduces travelers to this complicated country through their taste buds. Whatever you’re hungry for — ramen, sushi, sake — Arigato will indulge you. My family and I signed up for two tours in Tokyo — a city easily reached via Alaska Airlines’ Global Partner airlines. The Arigato tours would introduce us to some of the city’s more offbeat dining trends.

Early one Saturday morning, we rolled up to a hip local coffee shop near the legendary Tsukiji Market. “Why aren’t you going to Starbucks?” the doorman at our hotel inquired when we asked for directions. He didn’t know the start of it. As we sipped on perfectly prepared lattes, Asami gave us the basics on Japanese cuisine and customs, from chopstick etiquette to helpful phrases. She also explained what we going to encounter on the “Classic Tsukiji Insider’s Tour of Local Market Town with Breakfast.” Tsukiji stopped operating its famous fish auctions in late 2018, but this area hasn’t stopped serving hungry travelers and locals.

Asami’s number one tip: Be daring. We passed an open-air stand with a huge crowd outside. The draw? Beef intestine stew. No thanks. After a perfectly safe first course of grilled salmon and mackerel — popular Japanese breakfast dishes — our next stop was a stand selling Japanese sea snail. Served in an oversized horned shell, it was bitter and sinewy. Jack from Chicago suggested we grab some Japanese beers to wash the taste out of our mouths. It was only 11 a.m., but when you’re eating sea snails in Tokyo, anything goes.

We eyed counters selling hairy crab, giant sea cucumbers, squid guts and baby sardines coated in a sweet sesame sauce. Asami snapped up whatever caught our eye. Fried eel bones? Check! Rare white strawberries that cost $6.50 apiece? Worth every penny. I said I would try fugu, the deadly Japanese puffer fish that chefs need a license to prepare. Unfortunately, the fugu stand was sold out. I was secretly relieved. There was also a stand selling wagyu beef on a stick, topped with uni (sea urchin) and ikura (marinated salmon roe).

After wandering around the market, we headed to an enclosed area for a little picnic with all the treats that Asami had gathered along the way. The star of the show was botan ebi, shrimp that is served and eaten live. Chase, a courageous 11-year-old, was the first to try it. When my husband, Jonathan, went to take his piece, the shrimp flew off the table and started jumping around on the floor, giving new meaning to the phrase “fresh from the sea.” Here’s the good news: It was delicious.

Another morning, we headed to the cutting-edge Harajuku district for the “Crazy, Cute, Kawaii Food Tour” with our guides Asami and Asha. Kawaii means cute in Japanese and this is an area where the food is about as cute — and kooky — as you can get. We started off on a relatively safe note in a local gourmet grocery store, where we sampled the rice dessert mochi in a limited-edition cherry-blossom flavor. Asami and Asha also told us about Japan’s KitKat obsession and all the unique flavors you can find here: green tea, banana, sweet potato, apple and the list goes on.

Our next food stop was for ice cream made from sesame seeds. As odd as it was to eat jet-black ice cream, it was savory, yet sweet, and utterly creamy. For lunch, we sat around a table with a grill in it and cooked our own version of an Osaka specialty called okonomiyaki, which means “grilled as you like it.” It’s like a savory pancake, topped with eggs and mayonnaise. We also learned about Japan’s quirky vending machine culture. There are more than 5 million of them in Japan, and you can buy everything from corn soup to eggs to beer – and even non-food items including ties, umbrellas and T-shirts.

As we made our way to Takeshita Street, a narrow passageway at the heart of Harajuku, the crazy quotient started to rise. We passed by a shop with a line of people waiting for a novelty called roll ice cream, which has to be seen to be understood. We sampled ice cream shaped like adorable animals, from bunnies to pigs. We ordered the craziest crepes you’ve ever encountered, piled high with ingredients. The French would surely be horrified, but in Japan, the more elaborate the creation, the better.

Crawling down Takeshita street — which was crowded with pink-haired teenagers and throngs of thrill-seeking travelers — we checked out shops selling oddities like frozen popcorn, baby bottles filled with jelly-infused soda, and every kind of rainbow treat you can imagine. There was toast filled with rainbow-colored cheese, rainbow-colored cotton candy, rainbow cheese dogs, you name it.

After a hilarious session at a purikura, a photo booth machine where you can decorate pictures of yourself, we were inspired to strike out on our own. Our destination: the nearby Kawaii Monster Café, which has been described as Alice in Wonderland meets Willy Wonka on acid. This over-the-top spot was designed by a local artist and the food is as eclectic as the colorful décor, with rainbow pasta, chocolate chicken, mad scientist cocktails and all kinds of zany desserts. As my 6-year-old daughter danced around with an oversized monster and a couple of Harajuku girls with wild makeup and pink wigs, I knew that it would take a lot to ever top dining out in Tokyo.

With Alaska Global Partner airlines, there are several ways to get to Tokyo while earning and spending your Alaska Airlines miles. For example, Japan Airlines (JAL) flies nonstop from San Francisco, Los Angeles, San Diego and New York (JFK) to Tokyo, and from Los Angeles to Osaka. This year, JAL also added a direct flight from Seattle to Tokyo-Narita.