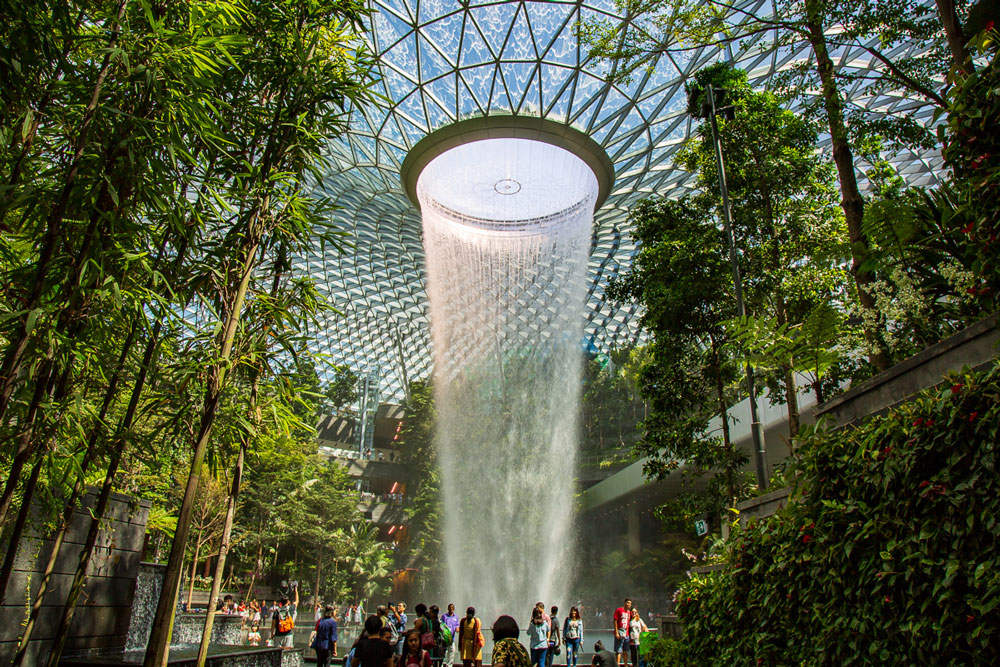 The heart of Singapore Changi Airport's Jewel hub is a five-story, 131-foot waterfall. (Photo by Kim I. Mott)

If airports held a World Cup, Singapore’s Changi would hold a record number of championships — winning consumer aviation website Skytrax’s annual award for best airport seven years in a row. Now its newest addition, the $1.25 billion Jewel hub, gives Changi the capacity to accommodate up to 85 million total passengers each year — and makes the case that an airport can be an attraction in its own right.

A self-described “lifestyle and entertainment destination hub,” the 10-story Jewel is set between three of Changi’s four terminals. With the opening of the Canopy Park family-oriented attractions on June 10, the hub is now fully ready to welcome 20 million visitors a year. More than half of them are expected to be locals not even bound for a plane.

Alaska guests can check out Jewel for themselves via Global Partner Singapore Airlines, which will add a new direct route from Seattle-Tacoma International Airport to Changi starting Sept. 3.

In Jewel, it’s easy to forget you’re in an airport. The 455,000-square-foot complex is home to nearly 300 shops and eateries. It’s been a big hit with locals already: Shake Shack and the first Pokémon shop in Asia outside Japan each drew four-hour lines upon opening.

Jewel was designed by Safdie Architects, known for modern statements like Singapore’s Marina Bay Sands, which has a prominent cameo in the film “Crazy Rich Asians.” The heart of Jewel — and most of the Instagram selfies — revolves around its five-story, 131-foot waterfall that appears suspended mid-air. Water rushes through a round oculus, cut from a towering dome above, then falls amidst a terraced forest valley home to 2,000 trees and 100,000 shrubs where nature walks and sitting areas look over the falls. Below, the water channels toward two underground levels encased in glass, passing Michelin-star ramen restaurants, reaching a walkway where visitors can press up against the surreal installation. Then, each evening, the whole thing gets a colored light show. It’s quite the sight.

Scenes from Changi’s Jewel hub (Photos by Kim I. Mott)