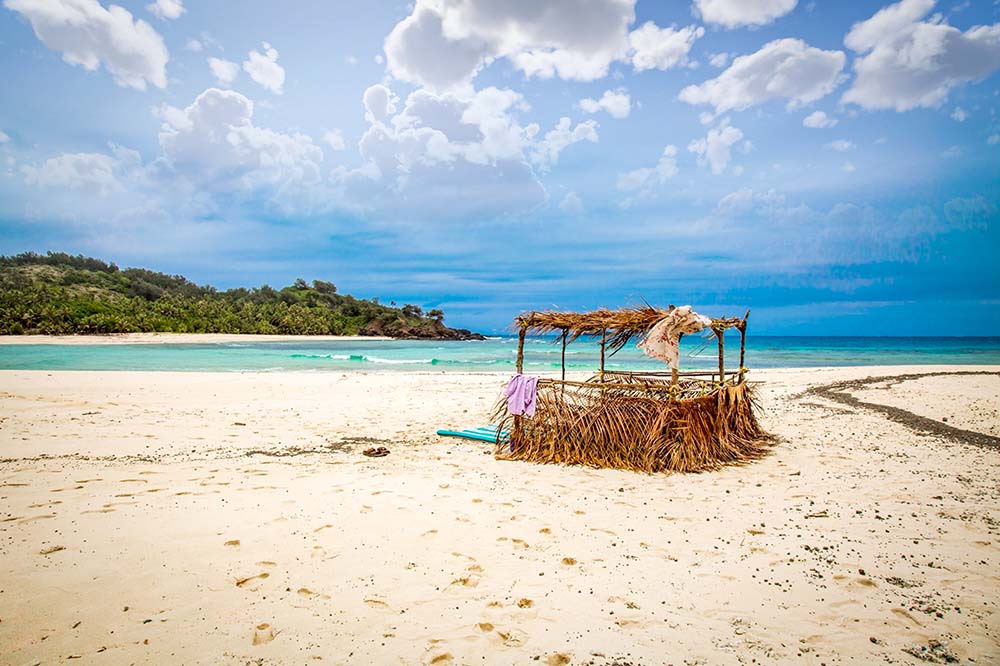 Photos by Kim I. Mott

When in Fiji – a paradise of nearly 330 islands and more than 500 islets, with clear blue waters and lush mountains – you’ll be able to unwind and free yourself of everything but tranquility.

It begins, after a welcoming bula greeting and soft voices singing over gently strummed guitars followed by lulling silence. Fiji is quiet. People speak softly because it’s polite not to interfere with the low-key sounds of sea breeze and bird song.

Then, there’s the pace. “Island time” is a real thing in a country where everyone has time for everyone. Don’t expect things to go fast. And, most of all, there’s the culture that feels rich, deep and close to its timeless roots.

Start planning your trip to Fiji with the guide below.

Rainy season – from November to April – can still be an excellent time to visit, depending on where you go. In the Nadi area of the main island of Viti Levu and the Yasawa Islands just west, rains typically come and go quickly, leaving long spells of sun. Meanwhile, the capital Suva – and the east end of Viti Levu – is much wetter in rainy season (as are northern and eastern islands, including destinations like Savusavu).

Diving conditions are best anywhere from May through September.

Lay of the land

Key areas to visit are Viti Levu, including its resort-lined south-facing Coral Coast. Just west are two chains of islands with great diving and powdery beaches arcing northward. Closest is the Mamanuca Islands, reached by regular ferries in as little as an hour. The tiny Mamanuca island of Modriki became home to Tom Hanks in the 2001 film Cast Away. Mana, meanwhile, is famous for its marine life, white-sand beaches and resorts.

North of the Mamanucas is the more remote Yasawa Islands, with accommodations options ranging from backpacker spots to high-end luxury resorts. Ferries reach most of the islands, and planes arrive a few, including the Yasawas’ eponymous island.

Much of Fiji’s 700 miles of coastline are seven shades of blue-green water. Even rockier shorelines have immediate access to swimming and snorkeling spots in the corals and waters abundant with marine life.

You will be happy here.

Generally, the best beaches are in the Mamanucas and Yasawas island chains west of Nadi, where you’ll find powdery white-sand beaches in calm lagoons or on uninhabited offshore islets. Great diving spots are all over, some involving close-up access to coral reefs, sharks and manta rays. Probably the best is Savusavu, home to the Jean-Michel Cousteau Resort (founded by the son of Jacques), where on on-site marine biologist takes guests on daily snorkeling trips.

Fiji’s local currency is the Fiji dollar (F$), currently worth about USD$0.46. ATMs tend to huddle in bigger towns (Nadi, Suva and Savusavu), and resorts typically accept credit cards. Elsewhere, you should have some cash on hand. Tipping is not expected for taxi drivers and waitstaff, though some resorts suggest gratuities for the staff of up to F$40 or F$50 per day.

A superb village to visit is Navala, made of 200-some traditional bure huts. It can be combined with hikes on the Ba River, to waterfalls and over lush mountains. Set on the river, Bulou’s Lodge is a modest place (generator-run electricity is on only a couple of hours a day). Food is superb and it’s hosted by a profoundly sweet mother-and-son team, who helps arrange tours.

There is no exaggerating the importance kava (yaqona) has on daily life in Fiji. Once exclusively a ritual for chiefs, this powdered peppercorn root has become part of every day local social interaction – weddings, birthdays, funerals, even to welcome the new Fiji Airways jet to Nadi in November 2019. For visitors, it’s an exciting (and typically mandatory) part of visiting any village.

When you visit a village, you’re sure to be ushered into a sevusevu offering ceremony, where you (or your guide) presents the chief with powdered kava. It’s mixed with water in the tanoa bowl (resembling muddy water), then presented in a coconut-shell bilo cup. Usually, it’s served “high tide” (meaning full). Clap once before taking the cup, say bula to everyone, then drink the grassy tasting water whole, then clap three times before handing the empty cup back. Everyone gets a turn, and then you repeat until the tanoa is empty. It’s a social situation. After the first round, you’re free to talk about who you are and why you’re here.

Kava isn’t alcoholic. It comes with a bit of tingle on the tongue and a somewhat relaxing quality after many rounds. Usually, visitors have only two or three rounds, not enough to really notice.

The world-famous Fiji Water is indeed bottled on Viti Levu, but spring water goes well beyond a pricy mineral water export (available locally too). Throughout Fiji, you’ll find natural springs rushing through mountains, over waterfalls, and trickling out of wells at roadsides where locals fill empty bottles.

Fiji has no more active volcanoes, but hot springs abound. In Savusavu, locals bake bread and cook food in hot spring pools that spill into the sea. Near Nadi, Tifajek Mud Pool is a family-run spot where you coat yourself in soft mud, then rinse off in thermal pools and finish with a massage.

Fiji’s diving and snorkeling scene is justifiably world-famous. Savasavu is a superb destination for reefs vibrant with marine life, or Kadavu islands’ Great Astrolabe Reef, with tunnels, caverns and canyons to explore. The Yasawas’ Sawa-i-Lau, a star of the 1979 film Blue Lagoon, is a surreal, towering sea cave where you can swim through an underwater tunnel to reach a hidden cave.

The Coral Coast, in particular, buzzes with organized activities, many with a family focus. The popular Sigatoka River Safari rides into the mountainous interior by boat and is capped with a village visit. The Coral Coast Scenic Railway chugs past forests, beaches and sugar plantations that ends at lovely Natadola Beach. The Sigatoka Sand Dunes stretch a few miles and are fun to ramble about on.

Interior Fiji towers with mountainscapes that are a lesser-seen, but a rewarding attraction in themselves. Tanaloa Treks offers multiday treks, with incredible village homestays through the gorgeously lush Nausori Highlands.

Remote Taveuni Island, aka the “Garden Island,” is filled with rewarding hikes through the dense, bird- and orchid-filled rain forest.

More accessible is the outline of the Sleeping Giant mountain that forms a backdrop to Nadi. Here, you can walk through late actor Raymond Burr’s garden through the dense rainforest where you can spot animated orchids, pink bananas and frogs on lily pads.

No matter your budget, you can figure out a way to afford Fiji.

Accommodations run the gamut from all-inclusive resorts with private bure hut villas (usually with minimum stays of three days) to simpler hotels and guesthouses and backpacker-oriented dorms. Rates range from USD$15 for a dorm bed to $1000 for a high-end private villa with pool, meals and activities thrown in.

Generally, booking in advance saves money, with July/August and Christmas/New Year’s being the most expensive periods.

Beaches around Nadi’s airport aren’t Fiji’s best, but the area has become a useful base for many travelers. Near Nadi, Denarau is a small resort island that’s made from reclaimed mangrove with a mall, marina, golf course, Hard Rock Cafe and decent beaches. Visitors begin/end trips here (at resorts like the newly renovated Sofitel), head out on ferries, as well as take day trips to beaches on nearby South Sea, Bounty and Beachcomber Islands. Backpackers tend to stay in dorms or cheese rooms at guesthouses by the water at Wailoaloa, including the longstanding Bamboo Travelers.

A couple of hours away, the Coral Coast is a bit of a tourist zone (particularly for Australian families). It’s home to many family-friendly resorts and activities, including sand dunes, river rides and village visits.

A few bus companies such as Pacific Transport connect destinations around Viti Levu, including Nadi airport, with Suva in just over four hours.

With a U.S. or Canadian driver’s license, you can rent a four-wheel drive car for DIY road tripping around Viti Levu or Vanua Levu islands. It’s a bit expensive, generally over USD$100 per day from most international companies. Main highways are pretty good, two-lane roads, but if you venture into the mountains, you’re likely to encounter bumpy gravel roads.

Taxis are regularly available in towns and cities. Suva and (surprisingly) Savusavu use meters, and other places don’t. Agree on a fare before getting in and you won’t have a problem.

Another special local delicacy to try is lovo, a special banquet of chicken, fish, or pork wrapped in coconut and banana leaves and cooked underground over river stones; many resorts offer these meals.

Village life is often more about local produce, including cassava (tavioka), taro (dalo) and coconuts, all sold in local markets that are fun to visit too.

Fiji’s Indio-Fijian community has led to a lot of spicy, Indian-style curries, typically vegetarian or chicken meats, which are served with rice and roti (flatbread).

Now, you’re ready for your island-getaway, book your trip to Fiji on alaskaair.com.