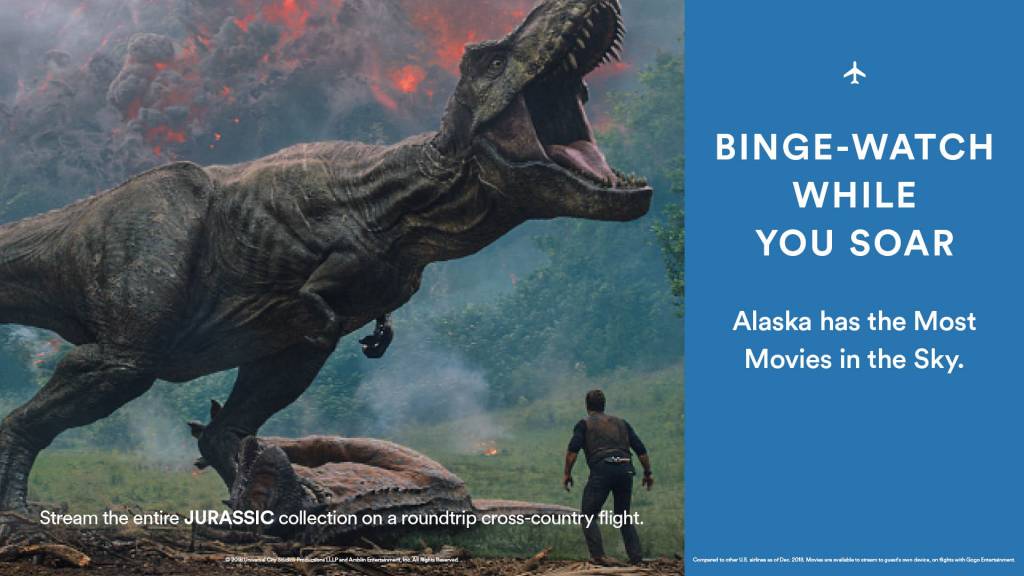 361,000 people reportedly watched the entire second season of “Stranger Things” the day it was released. If this doesn’t come as a surprise, then you know how easy it is to keep watching your favorite flicks when they’re packed with plot twists and the next one is only a click away.

But who has time to binge? Luckily, when you’re on a long-haul flight, time is on your side. And you won’t find a bigger free inflight entertainment library on domestic airlines than on Alaska. You can choose from over 300 free movies and more than 200 free TV shows, accessible on your own device on most flights.

To inspire your next inflight viewing marathon, check out a few binge-worthy titles in rotation starting next month:

Don’t have Prime? Now’s your chance to watch season 1 of the award-winning new series. Set in the late 1950s, the show follows the journey of a female comedian from the Upper West Side. With the director of “Gilmore Girls” at the helm, it’s fast-paced and witty like you’d expect – and the show’s leading lady doesn’t hold anything back.

If you feel like being a kid again – or introducing your kids to Woody, Buzz, Jessie and the rest of the gang – we’ve got all three “Toy Story” movies. They’re a great segue into animated new releases like “Incredibles 2” and “Ralph Breaks the Internet.”

Calling all Archie comic book fans. The comic’s chief creative officer adapted his fictional teenagers for the CW in this TV drama series. While the familiar characters are back, the New York Times says “the whole Archieverse is hotter and more haunted.” I’m intrigued.

If you’re a millennial like me, it’s hard to imagine the world without HP. The books started coming out when I was still in elementary school, and the movies followed me through college. Even though the magical twists and turns have lost their surprise, there’s something comforting about re-visiting Hogwarts and passing the tradition onto my kids.

If you love rooting for the underdog (and a good comedy), it’s hard not to love the Barden Bellas. While some trilogies lose their luster by the third movie, “Pitch Perfect” holds strong with new challenges and hilarity for the female a capella group. It’s also hard not to love Anna Kendrick and Rebel Wilson.

Seen one Bond film, seen them all? Now’s your chance to see for yourself. We’ve got 12 – from the 1969 classic “On Her Majesty’s Secret Service” to “Die Another Day” from 2002. If nothing else, you’ll be prepared for spy movie trivia night.

To be honest: I might just binge-watch the “Jurassic Park” movies for the quotable lines – and to see how far the movie industry has come with computer-generated imagery. From the 1993 classic to last year’s “Jurassic World: Fallen Kingdom,” the dinosaurs have had quite an evolution.

Many know “Rocky,” but did you know that when it won Best Picture in 1977, it beat “All the President’s Men” and “Taxi Driver”? From the original film to the recent “Creed,” it’s never a bad time to catch up on the classic Sylvester Stallone series.

Is it just me or does everyone wish their alter ego was Jason Bourne? The CIA assassin, played by Matt Damon, suffers extreme memory loss, but it doesn’t take long for him to start putting the pieces of his action-packed life back together. The original thriller was quickly followed by two movies. But the series doesn’t end there; “The Bourne Legacy” introduces a new character, and Matt Damon returns for the final “Jason Bourne.”

We recommend M. Night Shyamalan’s “Unbreakable,” followed by the more recent “Split.” While the latter wasn’t marketed as a sequel to “Unbreakable,” there’s a reason to watch them back-to-back. We’ll leave it at that because what’s a Shyamalan movie without an unpredictable plot twist?