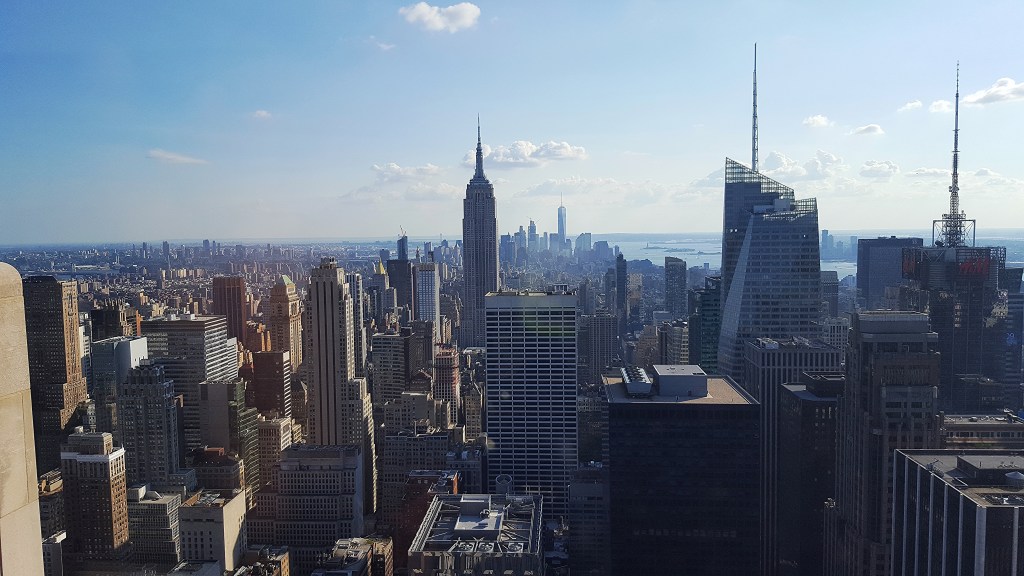 There’s nowhere in the world quite like New York City.  At once gritty and glamorous, its brash, busy streets filled with a mixture of people from all walks of life, give it a flavor like no other city you’ve been to. From the parks, to the markets, to the unlimited possibilities for art and culture, there’s something to occupy even the most restless spirit.

But the Big Apple also has something else going for it: incredible views. Stunning both architecturally and topographically, there are loads of beautiful panoramas of the city to be had— whether by land, air or sea.

So get your camera ready and prepared to be wowed: here are a few spots where you can behold some of the best views New York City has to offer.

Head to Midtown Manhattan and pair drinks with incredible vistas at Bar Sixty Five, New York City’s highest outdoor terrace bar. Located 65 stories above the Rockefeller Center, the free entry here makes it a much cheaper alternative to the observation deck at neighboring Top of the Rock, found on the 70th floor of the same building. The tickets there ring in at an eye-watering $37. Luckily, for the cost of your favorite cocktail, Bar Sixty Five will yield more or less the same unobstructed 360-degree views of Central Park and Manhattan’s most salient skyscrapers, and you can subsequently use your savings to grab grub at one of Midtown’s famous street food carts.  Just remember that you’ve got to look the part— proper attire is required to get into the bar.

The swanky Press Lounge, found in Hell’s Kitchen, touts itself as having Manhattan’s most dramatic panoramic views.  They’ve got reason to brag;  world’s best rooftop bars.  This luxurious locale is perhaps best experienced on a warm summer’s evening, when you can take in all of New York City’s bright lights from its glass-walled rooftop.  The Press Lounge also requires proper attire, so arrive dressed to impress in order to avoid disappointment.

If fancy Manhattan rooftop bars aren’t your thing, you’d do well to pay a visit to LIC Landing, an outdoor cafe and event space found in Long Island City, Queens.  Occupying a stretch of the waterfront park at Hunters Point South, the cafe has Manhattan’s expansive skyline as its backdrop. From its terrace you can spot famous structures like the Empire State Building and the Chrysler Building. Decidedly more relaxed (there’s no pesky dress code), cheaper (beverages start in the single digits), and family-friendly (bring the kids!), LIC Landing offers another feel-good perk: a portion of all sales revenue goes toward the conservation of the park.

If you’re more of a seafarer than landlubber, we’ve got just the lookout point for you: a spot on the balcony of the Staten Island Ferry.  Yielding simultaneous views of Manhattan, Brooklyn, and New Jersey, the ferry travels between the St. George Ferry Terminal in Staten Island and South Ferry in Manhattan., The ferry boasts the best views of Ellis Island and the Statue of Liberty completely for free, providing a great sightseeing option for those on a tight budget. Keep in mind, the ferry is part of New York’s commuter system, so during rush hour it can be packed. If you’re seeking a relaxed ride it’s a good idea to avoid travelling during peak periods.

Stretching 1.3 miles along Brooklyn’s East River shoreline, Brooklyn Bridge Park is an ideal place to behold Lower Manhattan’s bounteous horizon and the eponymous Brooklyn Bridge.  If you head to Pier 1, you’ll come across vast lawns, a playground, and a waterfront promenade, all of which are suitable options for sun-seeking, star-gazing, or skyline-gawking.  Pack a picnic and a good book to make a day out of the affair, and after the sun sets you can either stay for a movie (the park turns into an open-air cinema every Thursday evening in July and August), or head to the nearby DUMBO neighborhood for a nightcap.