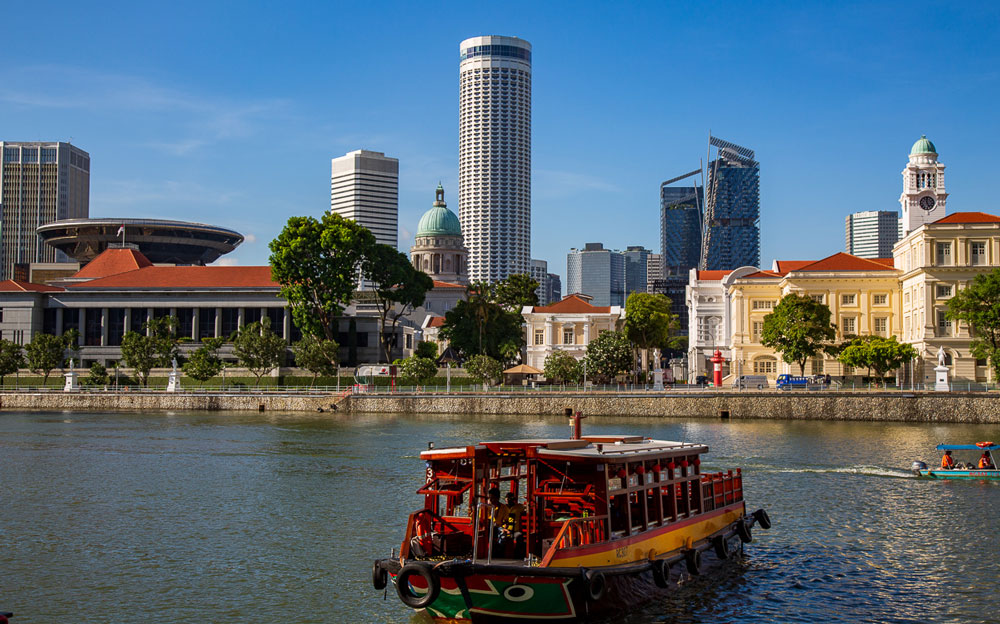 The Singapore River is lined by outdoor eateries, bars and bike trails. (Photo by Kim I. Mott)

First-timers to this tropical city-state often pack along outside images of an economic dynamo – home to that space-age skyline from “Crazy Rich Asians” and an extra rule or two. (No durians on the metro!) But once you’re here, Singapore reveals itself as much more: Asia’s fabulous melting pot, where Chinese, Malay and Indian cultures merge so memorably.

Beyond the luxurious shopping and glittering lights loom golden beaches, century-old shophouses decked out in colorful tiles, pedestrian-only backlanes filled with boutiques and cafes – plus some of the world’s best street food in the city’s iconic “hawker centers.”

It’s also a hub offering easy access to much of Southeast Asia. After a few days here, you can double-up an overseas adventure by flying an hour or two to some of the world’s best beaches in Bali or Thailand, the ancient Khmer kingdom at Cambodia’s Angkor Wat, or floating villages of Vietnam’s Mekong Delta. But you won’t be in any hurry to leave Singapore.

At 278 square miles, Singapore is a bit smaller than New York City, and is one of the most relaxing and rewarding Asian cities to visit. Most of the 5.4 million locals speak English (which joins Mandarin, Malay and Tamil as official languages).

The story of modern Singapore springs from many roots, including the Peranakan culture that grew from Chinese immigration in the 1400s, and the British colonial period, which began two centuries ago in 1819. World War II weighs heavy on Singapore consciousness, too: After Pearl Harbor the Japanese took over the entire Malay peninsula and the British-controlled Singapore by February 1942.

When colonial rulers proved unable to stop a foreign invasion, the seeds of independence were sown. Following a brief merger with Malaysia, Singapore became fully independent in 1965. Over the next half-century, Singapore left behind its humble kampong (village) origins and become one of the world’s fastest-growing economies, with the gross domestic product rising from US$320 per capita a year to over US$60,000.

For a fun way to learn more of Singapore’s 20th-century history, check out Sonny Liew’s cinematic and award-winning graphic novel, “The Art of Charlie Chan Hock Chye,” which tells an alternative history of modern Singapore through the life of an aged fictional cartoonist.

It’s summer all year in this tropical rainforest climate (the equator is only 88 miles south), and regardless of rain or crowds (notably July to August) it’s possible to have a great experience any time.

It rains frequently – often quick downpours, here and gone. February to April is generally driest (and without summer crowds), while rainfall peaks November to January.

Humidity is about the same all year, usually highest in the mornings at 90%, before tapering off in the afternoon – meaning it can be wise to start the morning by shopping or going to one of the excellent museums.

Reaching Singapore is one of the travel world’s great pleasures. Its Changi Airport has won consumer aviation website Skytrax’s annual award for best airport seven years straight, and the new Jewel terminal hub has become a city attraction in its own right. (See our recent video and review.)

Alaska Global Partners offer many flights to Singapore, allowing Mileage Plan members to earn their miles on a long-distance trip.

No visa is required for Americans to visit Singapore for up to 90 days, or for Canadians to visit up to 30 days. Ensure your passport is valid for six months and has two blank visa pages.

Singapore uses the Singapore dollar (SGD, or S$), which is worth about US$0.74. You’ll find ATMs using Visa, MasterCard, Cirrus, Plus, Eurocard networks in banks, convenience stores and malls – and most hotels, restaurants and shops accept the cards.

Singapore is more expensive than much of Southeast Asia, but it’s still generally less expensive than a visit to most American cities. You can spend anywhere from US$70 to more than US$400 per person per day, depending on how you roll. Restaurants and bars can rival high-end New York or Europe in price. A downtown restaurant serves overflowing platter of chili crab for S$90 (US$66), while pints of local Tiger lager beer vary from S$4 to S$16 (US$3 to US$11.70), depending on where you get it). But hawker centers offer excellent meals for as little as S$3 (US$2.20).

Lay of the land

Singapore is made up of more than 60 islands at the southern tip of the Malay peninsula, between Malaysia and Indonesia. The main territory is the 17-by-31-mile Singapore Island, also known as Pulau Ujong. Most of the attractions fill its compact south-central districts, radiating inland from the harbor.

Many visitors set up around Marina Bay, the result of a reclamation project. It boasts oversized attractions like Marina Bay Sands’ boat-shaped SkyPark and the glowing “supertrees” that tower over less artificial horticulture of Gardens by the Bay. Across the bay lies Singapore’s historic heart, the Civic District, with canalside eateries along Circular Road and promenades passing illuminated bridges.

Just inland is Chinatown, with a food street and several hawker centers. A couple of miles east is Kampong Glam, a Malay enclave known for pairing the biggest mosque in town with colorful shops and eateries. To the north is Little India, with temples, sari shops and curry houses on Serangoon Road. Orchard Road, a few miles from Marina Bay to the north, is shopping central, with more than 20 high-end malls.

You can easily fill five days in Singapore, so choose a convenient base. Civic District hotels can run over US$250. The nearby Marina Bay Sands is a US$700 splurge but offers guests infinity pool access in its SkyPark atop its three towers. Bucket-listers should consider the historic Raffles Hotel, famed for colonial-style grace and its homegrown Singapore Sling cocktails. It’ll cost you, though. The hotel reopened in August after a two-year restoration; rooms start around S$750 (US$550).

For cheaper stays, Singapore is fully entrenched in the “capsule hotel” scene, with slick offerings if you don’t mind climbing into a compact chamber and sharing bathrooms (starting at US$40 including breakfast). There are also double-bed capsules and small private rooms. Many cheaper Airbnb options run US$40 to US$60 a night, usually offering guesthouse-style apartments with shared bathrooms.

Singapore’s MRT (Mass Rapid Transit) is a well-organized system where you can take buses or the 124-mile subway system using the E-Z Link card, which can be bought for non-refundable S$5 directly from subway attendants by the turnstiles. Note: machines accept cash only.

Color-coded lines are labeled by their terminus, so you’ll need to know your direction to board the right train. Grab a free subway line map for easy reference.

To ride, swipe your EZ-Link card to enter a subway station or get onto a bus, then swipe again when leaving. Fares vary depending how far you go; most one-way rides range from under S$1 to just over S$2. (Here’s an online calculator.) You need to keep S$3 minimum on your card to use it. Subway stations have “top-up” machines to add a minimum of S$10 to your card. You can buy point-to-point access with cash.

The MRT also offers a day pass for S$10, which makes sense if you’re planning on at least six rides.

In addition to taxis, Grab is the local version of Lyft or Uber, and easy to use with its mobile app. Most rides around central sites cost less than S$7. A ride between Changi airport and the center costs about S$20. MRT subway lines and buses connect the airport and city center, though they require a transfer.

Note: All vehicular traffic, as in England, runs on the left side of the street.

Singapore’s attractions span centuries and, of late, heights. Here are a few things you’ll likely want to do first. And if you fly on Alaska Global Partner Singapore Airlines, you get discounts to many attractions. (See the list.)

Singapore’s sidewalks and promenades make for ideal walking and some sidewalks are even covered from midday sun or rains. The best is the two-mile walk around Marina Bay, where you’ll find theaters, restaurants, a Ferris wheel, downtown buildings, the city’s beloved Merlion sculpture fountain (the mystical mermaid/lion hybrid – only in Singapore!) and the iconic triplet-tower of Marina Bay Sands, where you can visit the SkyPark for S$23.

Locals and tourists alike come at dusk and for the evening light shows. Expect to accidently step in front of an Instagram shot or two.

Singapore has invested in showcasing its cultural achievements. And you’ll want to visit a couple of museums, which have the extra advantage of providing an air-conditioned break during the hottest time of day.

The excellent National Gallery Singapore, with its imaginative makeover of the old City Hall and Supreme Court buildings, debuted in 2015. Its towering galleries reveal artistic reactions to a modernizing era and are worth several hours.

The city’s oldest museum, the National Museum of Singapore, first opened in 1887 and offers an illuminating, at times playful, look at the development of the city-state in a stunning space. It even celebrates ‘70s films with a montage you watch from a “drive-in” theater.

For war buffs, Battlebox Museum offers a fascinating 75-minute tour of the bunkers in lovely Fort Canning Park where the British army ultimately made the call to surrender to the Japanese in February 1942.

Chinatown’s free Buddha Sacred Tooth Temple & Museum – housed in a Tang-style temple that looks old but was built in 2007 – is a free attraction near Chinatown eateries that gives a helpful Buddhism overview.

The Singapore Zoo is considered by many the world’s best. In the “open concept” space, natural boundaries replace fences and bars. The zoo is even open after dark for “night safaris” when critters are most active.

Brightly colored two- or three-story Chinese-style shophouses, built from the mid-1800s until World War II as commercial and residential spaces, are as key a piece of local architecture as the “painted lady” Victorians of San Francisco. The most elaborate, with ornate tilework and columned windows, incorporate Malay and Art Deco influences.

You’ll see them across town, including Little India’s Serangoon Rd, at the open-air eateries in Chinatown or the pub scene of river-facing Circular Road, and on boutique-filled lanes of Kampong Glam.

It’s known for urban glitz, but Singapore offers many ways to enjoy the outdoors. Pulau Ubin is a vehicle-free island near the airport, reached by a S$3 “bumboat” ferry; there you can rent bikes to explore a relatively untouched nature, including wetlands and mountains with views back on the city and the sea.

Another great place – particularly for families – is Sentosa Island, an amusement park hub with the nicest beaches.

Michelin stars and awards run rampant in Singapore, from food stalls to classy dining like Odette in the National Gallery. You will eat well, regardless of how much you spend.

The 100-plus hawker centers are a revered link to street food heritage, each packed with endless options of cheap, excellent food that give a local spin to Chinese, Malay, Indonesian, Indian and Western recipes. “Crazy Rich Asians” fans will want to go to Newton hawker center, where Rachel goes for a hot, spicy plate of chili crab. There are many more options.

Singapore has been Southeast Asia’s capital of shopping for generations. Its Orchard Road is the region’s Champs-Élysées, lined with glitzy malls and high-end boutiques.

Kampong Glam is more like hipster Singapore, particularly the boutiques on the pedestrian strip of Haji Lane. A block away, Arab Street is good for imported textiles and rugs. You’ll find many colorful knickknacks in Chinatown and at Little India Arcade off Serangoon Road.

If you’re looking for food products, most hawker centers have markets – particularly helpful if you’ve fallen for the coconut jam used in kaya toast.

Explore how you can earn and redeem miles on trips to Singapore and other destinations in Asia by flying on Alaska Global Partner airlines.