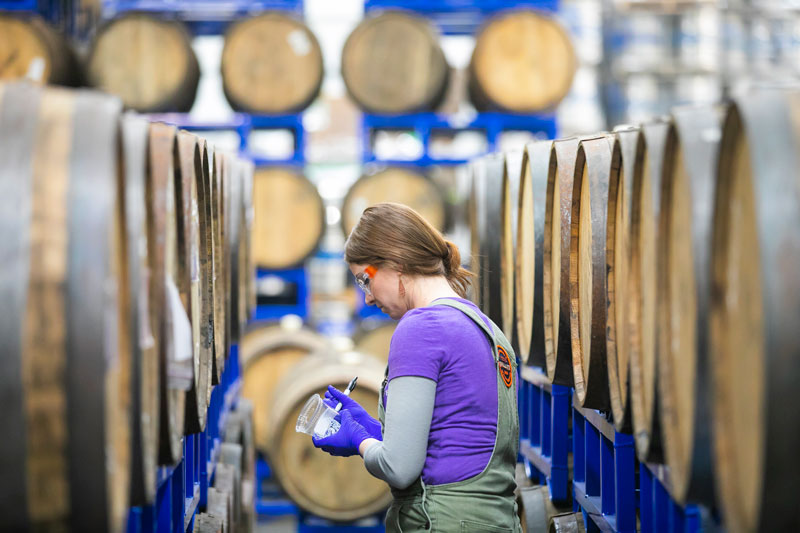 Seattle’s Fremont Brewing has endeavored to be a sustainable craft-brewing operation from the start. (Photo by Ingrid Barrentine)

We are telling the stories behind some of the foods and drinks offered inflight, highlighting companies whose sustainable business practices help Alaska “fly greener” – and are West Coast destinations we love to visit. Seattle’s Fremont Brewing is the first in this ongoing series. Fremont’s Lush IPA is currently available inflight and the Lounge Life IPA was crafted exclusively for Alaska Lounges.

Fremont Brewing’s Matt Lincecum dashes past a stainless steel tank, hands cupping a mound of verdant cone-shaped flowers. The fresh hops, picked just a few hours earlier in the Yakima Valley, are among 71,000 pounds destined for Fremont’s Field to Ferment fresh hop pale ale – a celebration of the signature Pacific Northwest crop only available in September and October. Lincecum, who owns the brewery with his wife, Sara Nelson, sifts the flowers with their delicate spicy scent into waiting hands. “Nothing smells like this, nothing tastes like this,” Lincecum says. “We live for this every year.”

This passion for distinctly Northwest flavors – organic hops paired with heritage malts and grains – inspired Lincecum and Nelson to build a brewing operation that sustains local farmers and strives to reduce waste throughout the beer-making process. In the decade since Fremont Brewing opened, they’ve crafted hundreds of different beers in numerous styles and have created an urban beer garden in Seattle that’s equal parts local family hangout and beer-tourist destination. They are marking their 10th anniversary with a celebration September 28-29 that includes food trucks, a barrel-aged release and throwback beer on tap. “Tasting rooms are the front porches and living rooms of their neighborhoods,” Nelson says. “Beer fosters community.”

Lincecum and Nelson recently took time to reflect on the brewery’s longevity, their craft-beer experiments, their partnership with Alaska Airlines – and how their determination to be responsible environmental citizens has influenced their business from the beginning.

What inspired you to start Fremont Brewing in 2008?

Matt Lincecum: I made a home brew that eventually became Universale. It was the first beer I had made in 15 years of homebrewing that made me think I could actually build a company around this beer. We had young kids. I was a practicing lawyer. Sara was in politics. I thought naively that combining our experience and values and starting a brewery was the best possible thing to do. And then the economy fell by about 50 percent.

Sara Nelson: I was nervous because there were already a few microbreweries in town. Matt said he thought there was some space in the market for another. After doing market research, I got on board and decided to take what I’d learned in my work at City Council to help the brewery grow its sustainability program. That was part of our values from the get-go.

What was it about Universale that convinced you?

Lincecum: It was the first beer that really featured the malt in the way that I loved and wanted. We’ve spent a large amount of time on our craft malting program, making sure that heritage malt and varieties of grains and barley and wheat are not lost to antiquity. As our flagship beer, we named it after our neighborhood, the self-described “Center of the Universe.”

Was there a moment when you realized the business would work?

Lincecum: About five years in. Every other moment until then was abject terror. But failure was not an option. This is a family-owned business driven by passion and values. The mission is to brew great beer and do good. Since then we’ve achieved success every year. We started off with one employee, and now we have around 85 employees.

Nelson: Now, people come to Seattle from Japan, from California, from across the country because they’ve heard of our beer scene and they want to experience it first-hand. Fremont is often at the top of their list. How do they know about us? We’ve made our mark on the craft beer scene, and this is adding depth and breadth and vibrancy to our sector.

Fremont has three brewing operations ranging in size from three barrels to 80 barrels, allowing for a lot of experimentation. Why is that important?

Lincecum: In craft beer, if you’re not passionate, people taste it. We experiment nonstop and it keeps us fresh.

We have our core beer. You can always find our Interurban and Universale. You can find our seasonal beers. Right now, we have Field of Ferment, which is the largest fresh hop beer program in the world. At the urban beer garden, you can find those beers on tap and also beers from collaborations with breweries from all over the country. But to do four new beers a week, you have to stay excited. Part of that is introducing new things to people – like the Lounge Life that we did for Alaska Airlines.

Lounge Life IPA was crafted just for Alaska Lounges. What did you like about this experiment?

What inspired you to work with Alaska?

Lincecum: We fly Alaska almost exclusively. We have the Alaska credit card for business. So, we’re all in and got very frustrated taking the Alaska flights and not having a broader diversity of beer choices. Literally, it was that selfish – we’d like to have some other beer on this plane when we fly. This is our hometown airline. It represents the Northwest. We thought, let’s pitch Alaska.

Nelson: Because it’s the right thing to do for the environment, the local economy and for innovation. We used organic ingredients from the start – like organic malt – and helped spur the organic hop market by helping to change the USDA rule to specify that organic beer actually had to have organic hops. We have a responsibility to grow the market for sustainably produced ingredients.

Lincecum: This is all about preserving the varieties and the diversity of the land. If you don’t have biodiversity in the world of barley farming, you have a dead ecosystem. This is about keeping farmers happy, healthy and on the land. This really is not about flavors. It’s about the health of our farming economy.

You’ve also made conservation a priority and have partnered with tech companies to explore ways to turn spent grain and wastewater into green energy. What are other ways you conserve resources?

Nelson: From the beginning, we were very focused on zero-waste principles. We believe there is no such thing as garbage – just resources out of place – which is why we always strive to find the highest and best uses of our “resource stream.” To conserve energy, we switched out about 900 fluorescent bulbs for LED bulbs. We also capture heat from the brewing process and use it to power our steam system – so we’re using heat from brewing to heat the water for brewing. Eventually, we’ll capture rainwater and use it for watering our bee corridor of native plants that attract and nurture honey bees. We also have hives on the roof!

Lincecum: We’re really focused on reducing the amount of water. That’s everything from sloping floors so you don’t have to use as much water when cleaning, to recycling water. I believe the number one risk we have coming in global climate change is the threat to our water supply. We’re trying to use every single drop that we possibly can before it goes back into the cycle.

Nelson: No water, no beer. That is the foundation for a lot of what we do.

Lincecum: We were also among the first to put our beer in cans because you can put 40% more cans of beer on a truck than you can bottles, So, 40% fewer trips. And you can take a can and recycle it almost infinitely.

And you’re active in the community and on policy-making. How do you choose where to put your energy?

Nelson: Each year we provide in-kind and cash donations to over 300 nonprofits working in the environmental, social justice and educational spheres. In addition, I serve on the Government Affairs Committee of the Brewers Association and the Washington Brewers Guild to advance the interests of independent craft beer. I’m also on the Board of the Seattle Metropolitan Chamber to support a thriving regional economic climate. And we’re on the go-to list of nonprofits and policy makers who need a small business voice in support of environmental stewardship. Ultimately, we want to be leaders and set an example for businesses – not just brewers – to take the next step to protect our air, water, soil and community. Because it’s the right thing to do.

The beer garden has such a relaxed vibe, with families hanging out alongside beer-tasting aficionados. Why did you choose the Fremont neighborhood?

Lincecum: It’s still a neighborhood where you can walk and people know who you are. You’re on the water and you’re looking at downtown – it’s beautiful. You’re looking at Mount Rainier behind downtown and it’s awe-inspiring. But you’re still in this funky little neighborhood.

Nelson: The draw of the neighborhood is its crazy mix of artists, tech workers, families, young, old and all the businesses that support them. Basically, Fremont is a microcosm of what makes a city vital and livable. So, we wanted to create a space where you can bring your dog. You can bring your kids, your work group, your bachelorette party – whatever! We do not provide Wi-Fi so you have to talk to other people and maybe make new friends. We want to be Fremont’s living room to our neighbors as well as out-of-town visitors because we really truly love Fremont, we’re grateful for the community’s support, and we hope we represent … well, the “Center of the Universe.”

The Fremont Brewing urban beer garden is open 11 a.m. to 9 p.m. every day at 1050 N. 34th St. in Seattle. RSVP for their 10th anniversary celebration September 28-29 – which includes a barrel-aged stout release and throwback beers – on the Fremont Brewing Facebook page.